Most art in museum collections was made by male artists, and where female artists are represented, their work is often less well known. This reflects a long history of most art being made, bought and sold by men, something many museums and galleries are now working to address. While women artists form a minority within the Hatton Gallery’s permanent collection, there are some fascinating female artists represented within it. These artists are the focus of this selection.

The Hatton collection as a whole includes artworks dating from between the fourteenth century and the present day, but most of the works by women artists are twentieth century or later. This is due to the increasing opportunities available to women as the twentieth century progressed, as well as the fact that the Hatton’s collecting activity has often focused on modern and contemporary art.

Why not explore our selection of works by women artists from the Hatton collection? There will also be a chance to see many of these objects on display in the gallery in the coming months, so do keep an eye on our website for further information.

One of the earliest works by a woman in the Hatton collection is this drawing and collage piece by the German artist and photographer Ella Bergmann-Michel. Bergmann-Michel almost always exhibited her work alongside that of her husband, Robert Michel, whose surname she hyphenated with her own. But she is now justly also remembered as an individual talent. 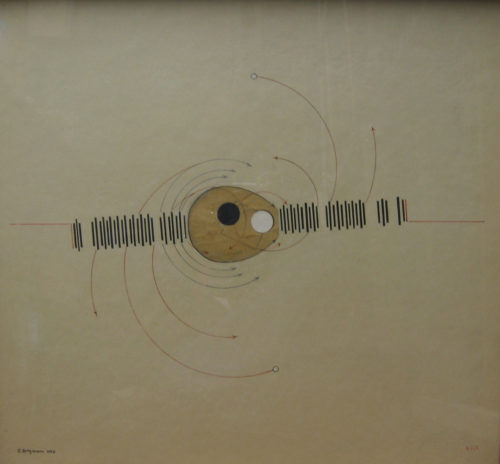 In addition to making abstract collage pieces like this one, Bergmann-Michel also left a mark as a filmmaker. One of her films, Wahlkampf 1932 – Election 1932, documented the final days of Weimar Germany in the weeks before Hitler rose to power. Later, the Nazis deemed Bergmann-Michel’s artwork ‘degenerate’ due to its modern influences, a judgement they applied to modern art made by many internationally renowned artists. Much artwork deemed ‘degenerate’ was confiscated and destroyed in Nazi Germany; it was probably for this reason that Bergmann-Michel hid some of her work behind a wall in her home during the war.

Born in Cheshire, Barbara Greg moved to London as a young woman to study at the Slade School of Art and then the Central School of Art and Crafts. She is best remembered for detailed wood engravings like this one. She went on to illustrate several natural history books. She also exhibited her work widely at venues including the Royal Academy. 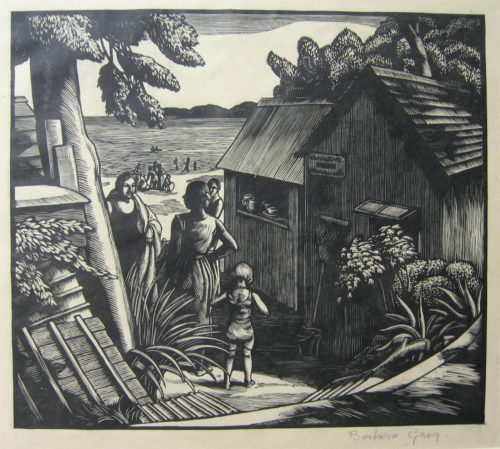 This print of two women and a child between beach huts, with the sea in the background, reveals Greg’s ability to create highly detailed scenes using the method of wood engraving. This technique involves using sharp metal tools to engrave into a block of wood. When ink is applied to the surface of the finished wood block a print can be taken. It is possible this print arrived in the Hatton’s collection via the Contemporary Art Society, who also donated a copy of it to the British Museum.

Louisa Hodgson is the first – but not the last – artist on this list to have a close association with Newcastle University’s Fine Art department. She taught at King’s College (now Newcastle University) from 1924 until the 1960s, where she was respected for her knowledge of perspective and traditional methods. Within the wider art world, including at London’s Royal Academy, she gained a strong reputation for her ambitious ‘problem pictures’. These paintings, which were much debated in her lifetime, depicted scenes of modern life. Despite Hodgson’s successes, her work is almost completely forgotten these days, a fact the Hatton looked to address in 2018 with the exhibition Louisa Hodgson: A New Perspective. 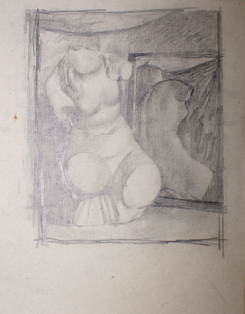 The Hatton collection includes a large group of pencil drawings by Hodgson, such as this study of a sculpted torso seen reflected in a mirror. These drawings reflect Hodgson’s tendency to draw prolifically. Some of these sketches stand alone as technical or creative exercises, while others were made as preparatory studies for paintings.

Mary Webb studied art at Newcastle under the tutelage of two leading British artists, Victor Pasmore and Richard Hamilton. This early painting is an unusual example of her work: she soon abandoned the recognisable forms and the relatively muted colour palette seen here. A visit with fellow students to the Tate Gallery’s New American Painting exhibition in 1959 had a profound impact on Webb’s approach. Her style became much more abstract, and she is best known for her paintings exploring vibrant colour combinations and geometric shapes. 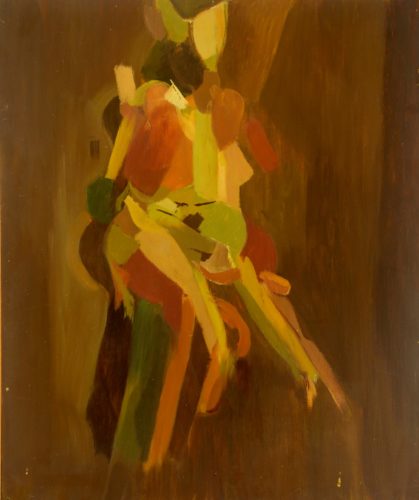 Webb went on to have a successful career as an artist and teacher, and examples of her work are held in several other British public collections. An exhibition of her work was held at the Sainsbury Centre for Visual Arts in 2011; this show toured to the Hatton Gallery in 2012, where some of you might have seen it.

Prunella Clough studied art in London, where her learning was interrupted by the onset of World War Two in 1939. She worked as a draughtsman of maps and charts during the war before developing a long and prestigious career as an artist and teacher. She won the Jerwood painting prize shortly before her death in 1999.

The District Line, which dates from the 1960s, reflects Clough’s interest in the overlooked urban landscapes of post-war Britain. While the left hand side of this piece, which she considered a diptych, is dominated by black, the contrasting areas of orange, red and blue make this painting one of the most vibrant and colourful in Clough’s oeuvre. The piece was given to the Hatton by the Contemporary Art Society in 1968; the gallery acquired a number of its best-loved pictures in this way.

Rita Donagh studied and taught in the north east. She joined Newcastle University’s Fine Art department as a lecturer 1962, a few years before making this piece. Her best-known work is political in nature, particularly in relation to the recent history of Northern Ireland. She has also made work that considers the role of women artists. 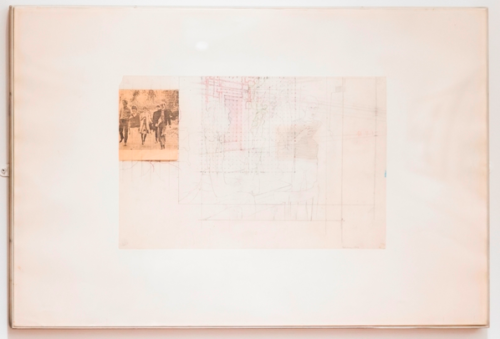 This piece combines a drawing, which Donagh made from a photograph showing the artist Andy Warhol and the actor and model Edie Sedgwick at Warhol’s studio, with a collaged photograph of Warhol walking with some friends. The grid-like forms and perspective lines are typical of Donagh’s work, which often displays a fascination with mapping and draughtsmanship.

Another alumna of the Fine Art course at Newcastle, Elaine Johnson made this distinctive piece for her degree show in 1970. It is an example of Johnson’s ‘shape paintings’, in which she experimented with using the shape of the canvas as part of her interpretation of the subject. Here, the shaped canvas adds to the strong sense of perspective seen in the painting and draws attention to the canvas as a physical object. The sombre colour palette and the strange emptiness of the pool reflect the artist’s interest in the idea of absence.

The gallery purchased Centennial Pool directly from Johnson’s degree show, and it has been exhibited in the gallery on a number of occasions since. After leaving Newcastle, Johnson successfully pursued a career as an artist and teacher.

Born in Lisbon, Paula Rego lives and works in London. She is known for her narrative paintings and prints exploring highly politicised subjects, stories and fairy tales. When a 1998 referendum to legalise abortion in her native Portugal failed, Rego’s Abortion series, which depict the harrowing dangers of illegal abortion, was credited with helping to sway public opinion towards a second (this time successful) referendum on the matter in 2007. 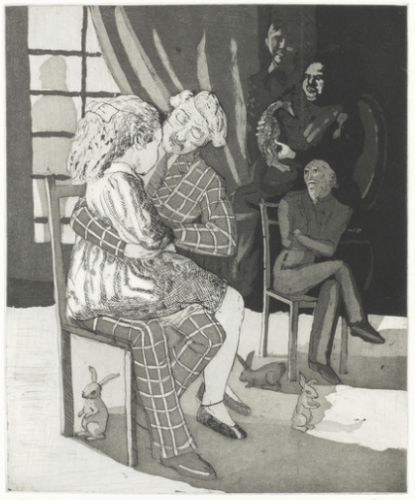 The meaning of this print, The Wild Duck, is much more ambiguous. It is a stand-alone narrative scene which shows a girl sitting on the lap of a man. Three rabbits move around on the floor beneath them, and three shadowy figures watch on in the background, one of them apparently holding the ‘wild duck’ of the title. Rego’s mastery of the tonal printmaking technique of aquatint allowed her to create effective tonal contrast, adding to the air of mystery pervading this strange and unsettling scene.

The contemporary Welsh printmaker Bronwen Sleigh takes inspiration from industrial architecture. Like Prunella Clough, she is also interested in forgotten urban spaces. In her prints she uses different colour combinations and geometric forms to reinterpret places she has visited. These places become unrecognisable within the world of lines, forms and architectural fragments visible in her finished prints. 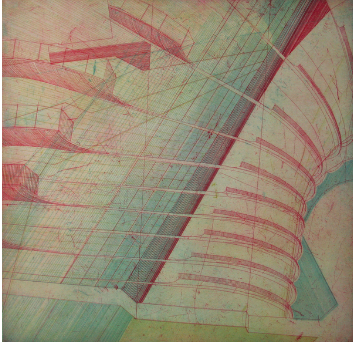 In 2017 the Hatton won the Hallett Independent Acquisitions Award, which enabled the gallery to purchase 14 new prints for the collection at the London Original Print Fair. The gallery’s selection included a group of five etchings by Sleigh, of which this is one.

This piece by the British artist Linder Sterling is one of the gallery’s most recent acquisitions. Linder is best known for her feminist photomontages, which this work is an example of. Here she has collaged images of the home, shown teetering dangerously. Through the windows we can see outsized images of women, surely too big to be confined within the buildings they peer out of for long. 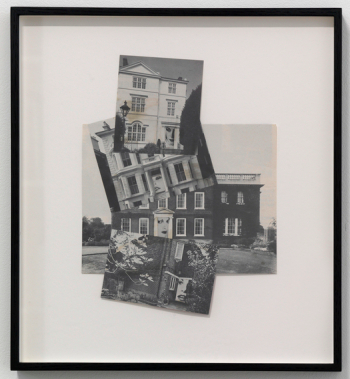 Linder’s wider practice has straddled performance, music and video. Her now iconic design for the sleeve of the Buzzcocks’ single Orgasm Addict (1977) is one of her most famous works: the design includes a nude woman with an iron for a head or helmet and mouths for nipples. Look out for our new exhibition of Linder’s work, Linderism, which travels to the Hatton Gallery from Kettle’s Yard, Cambridge later this year.