One of the great joys of rummaging through the Society of Antiquaries (SANT) books in the Great North Museum Library is that you can never be exactly sure what you will come across. One of my many passions is the theatre so finding that the library had a copy of Ellen Terry’s autobiography was a joy. However, as it turned out, it was not Miss Terry that proved to be the most interesting aspect of this book. It was the person who had once owned the book and had donated it to SANT who took my interest, Mr. E. Story-Gofton. 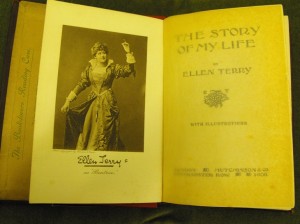 'The Story of My Life' by Ellen Terry

On the fly page is a dedication “To Story Gofton, with very kind regards from Ellen Terry” and dated October 1908. Opposite, pasted to the cover, are press cuttings about Story-Gofton playing in Bernard Shaw’s Captain Brassbound’s Conversion along with a cartoon. Further in there is a hand written note from Terry herself to Story-Gofton welcoming him to the tour. The book is protected by a “Boots Book-Lovers Library” dust cover (a historic document in its own right) and in the back of this are a number of letters, cuttings and photographs. So who was E. Story-Gofton? 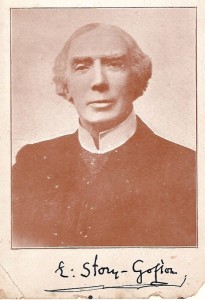 Edward John Story [Gofton to be] was born at Elswick Row, Newcastle on 31 July 1845. He was educated at the Royal Grammar School where he obtained his love of the theatre, and throughout his life he performed as an actor and singer. He managed a number of touring companies both in this country and overseas. At the beginning of the 1890s he was performing Shakespeare and other plays in Africa; in 1893 he returned to Newcastle to direct Cinderella at Tyne Theatre (where he had been the manager for a number of years previously), and the new year of 1898 found him at the Theatre Royal, Sydney, Australia. At the turn of the twentieth century moving pictures were developing fast and Story-Gofton appeared in a number of them between 1913 and 1922. Towards the end of his life he and his wife lived in Ilford, Essex, and Story-Gofton continued his work as a theatre critic writing a number of articles and letters to newspapers. He died aged 92 at his Ilford home in 1939.

This has by its nature only been a sketch of a man of the theatre and of course there is much more to tell. However, this illustrates just what unexpected gems can be found while rummaging through old books.

Many thanks to Martin for this fascinating piece of research. The book Martin was looking at is The Story of My Life by Ellen Terry, published by Hutchinson & Co. in 1908, and is in the collection of the Society of Antiquaries of Newcastle upon Tyne. As Martin says, you never know what exciting snippets of information you might come across while browsing through the books in the Great North Museum Library.

(Please note that the library will be closed for Christmas and New Year from 23 December until 3 January). 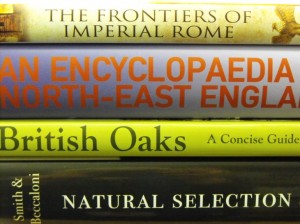 New books in the GNM Library

All three library collections have a range of new books. Here is a selection:

The Romans came this way : the story of the discovery and excavation of a Roman military way across the Yorkshire Pennines / Norman Lunn … [et al.], Huddersfield & District Archaeological Society, c2008