The Great North Museum: Hancock during the First World War

During the First World War the Great North Museum: Hancock was known as the Hancock Museum. The displays looked very different then but would still have contained many of the fascinating natural science objects that they do today.

The curator of the museum in 1914 was Edwin Leonard Gill. In 1915 his father, Joseph J Gill, wrote a letter to the Museums Journal. 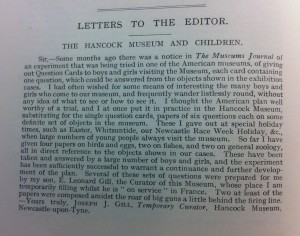 Letter from Joseph J Gill printed in the Museums Journal, 1915

‘Several of these sets of questions were prepared for me by my son, E. Leonard Gill, the Curator of this Museum, whose place I am temporarily filling whilst he is “on service in France”. Two at least of the papers were composed amidst the roar of big guns a little behind the firing line’ Yours truly, Joseph J Gill, Temporary Curator, Hancock Museum, Newcastle upon Tyne