The Great Frost of 1784, Newcastle upon Tyne 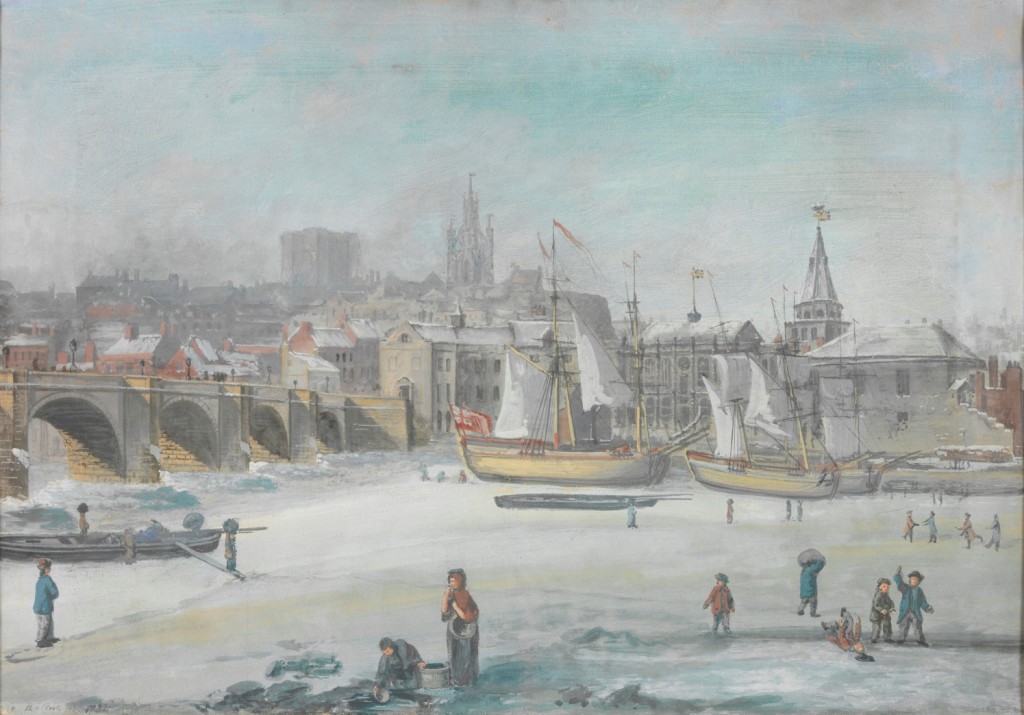 In March 1784, Newcastle was still gripped by the frost and ice of an exceptionally hard winter. The frost and snow was so bad, said local historian John Sykes in 1824, that ‘the Tyne was three times frozen over in one winter, a circumstance never before remembered by the oldest person living’. Despite the unseasonable weather, however, a pair of crows returned to a previous nesting site on top of the spire of the old Exchange, visible on the right of this view (more of the crows later). The bizarre combination of an ice-bound River Tyne in March with birds attempting to nest in such an ambitious location captured the attention of the anonymous painter of this view. Admittedly rather naïve in style, the picture is nevertheless an interesting record of Newcastle at an early date.

On the left is the Tyne Bridge, which had opened 3 years earlier, in 1781. It replaced an earlier bridge that had been swept away in floods. The rectangular block of the castle keep is surrounded by a dirty haze of smoke from the coal fires of the houses. St Nicholas Church (not yet a Cathedral) is in the centre of the scene.

The Great Frost of the winter of 1783-4 affected all of Britain, and the months from January to April were especially cold. Even the River Thames at London froze in February 1784. The big freeze was linked to the massive eruption of volcano Laki in Iceland, which took place over eight months from June 1783. It put a fog of ash and sulphur dioxide into the atmosphere over Europe, poisoning outdoor workers. Iceland is estimated to have lost 25% of the population from toxic gas clouds and famine. In the UK, the build-up of sulphur dioxide in the atmosphere towards the end of 1783 blocked the heat of the sun and caused the most severe winter for more than 200 years, which is thought to have resulted in 8,000 additional deaths. 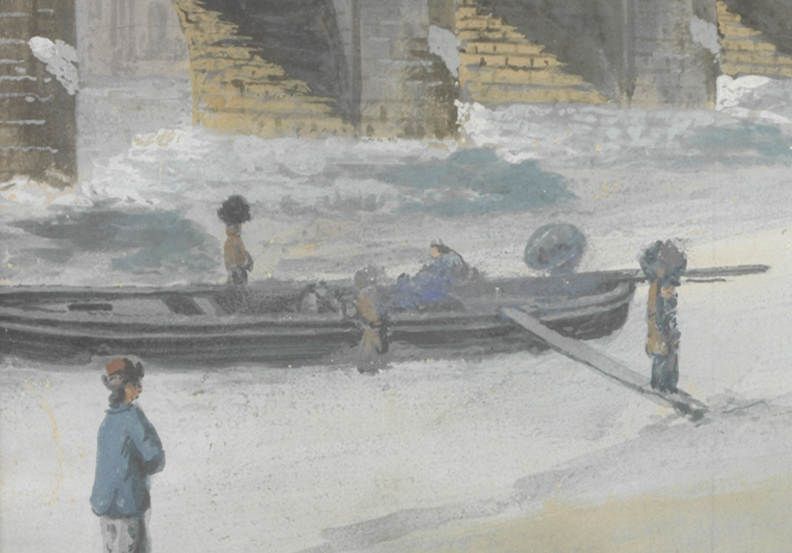 In Newcastle, the Great Frost meant that coal keels had to be unloaded across the ice. 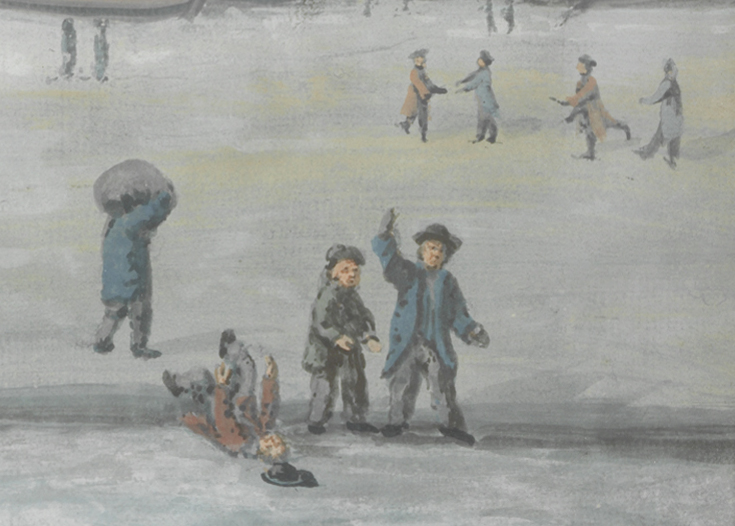 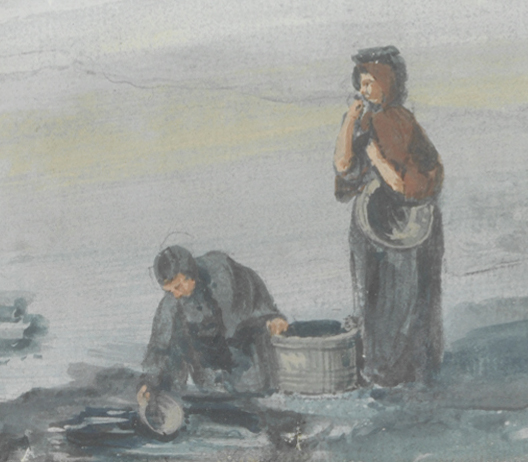 In the picture of the Great Frost, one man tumbles over, but several gentlemen are taking the opportunity to skate around on the frozen river. Some women have come down to collect water from a hole in the ice, and we can see how thick the ice is. A red shawl over bare arms doesn’t seem adequate protection against the icy cold. 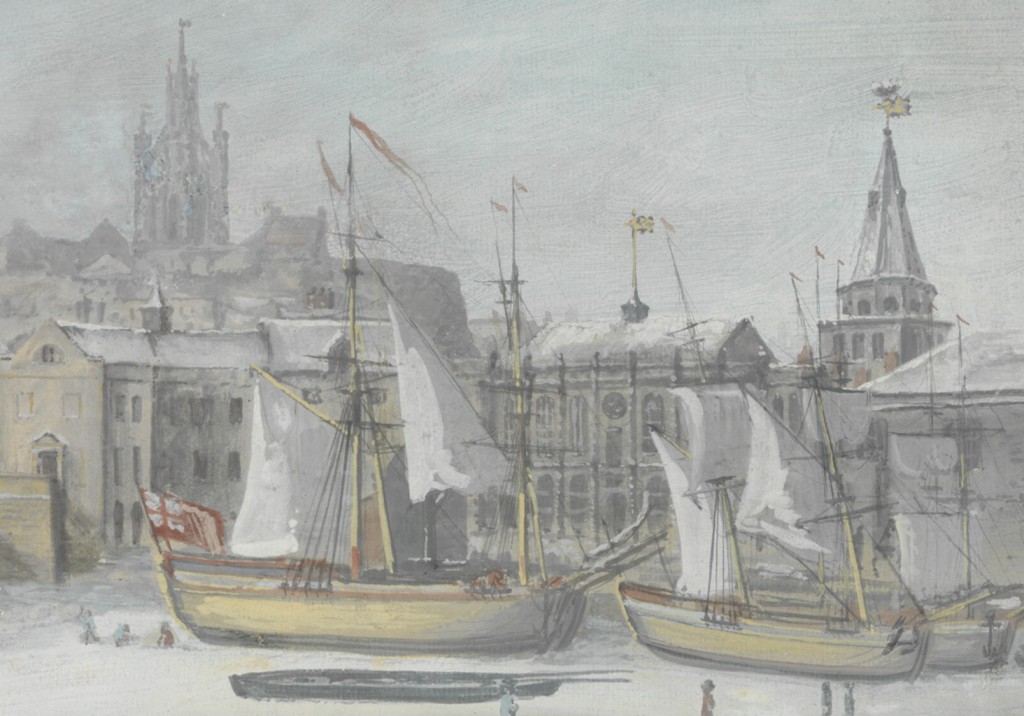 In this detail from the painting, the main part of the old Exchange is in the centre, with its tower and spire on the right. And right at the top of the spire is a crow’s nest. The painting is inscribed ‘12 o Clock Mar 1784’. 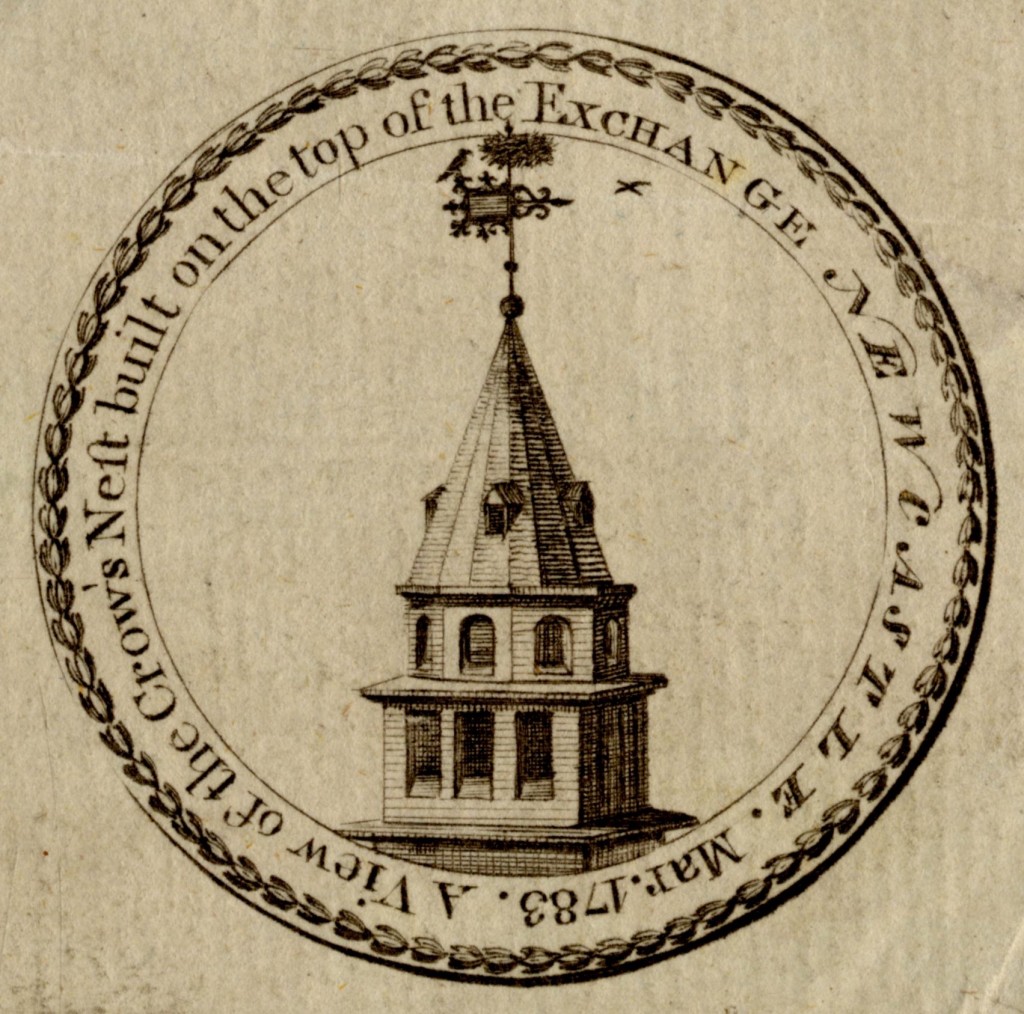 Newcastle historian John Brand, writing in 1788, described how the nest was, ‘above the weather-cock, on the very top of this steeple, in a truly singular situation, as the nest shifted about with every change in the wind’. This little engraving records the birds’ successful nesting in March 1783. However, the cold of the Great Frost of 1784 meant that birds were competing for scarce materials, and Brand said that other crows attacked the nest and ‘pulled it apart before it was finished’. 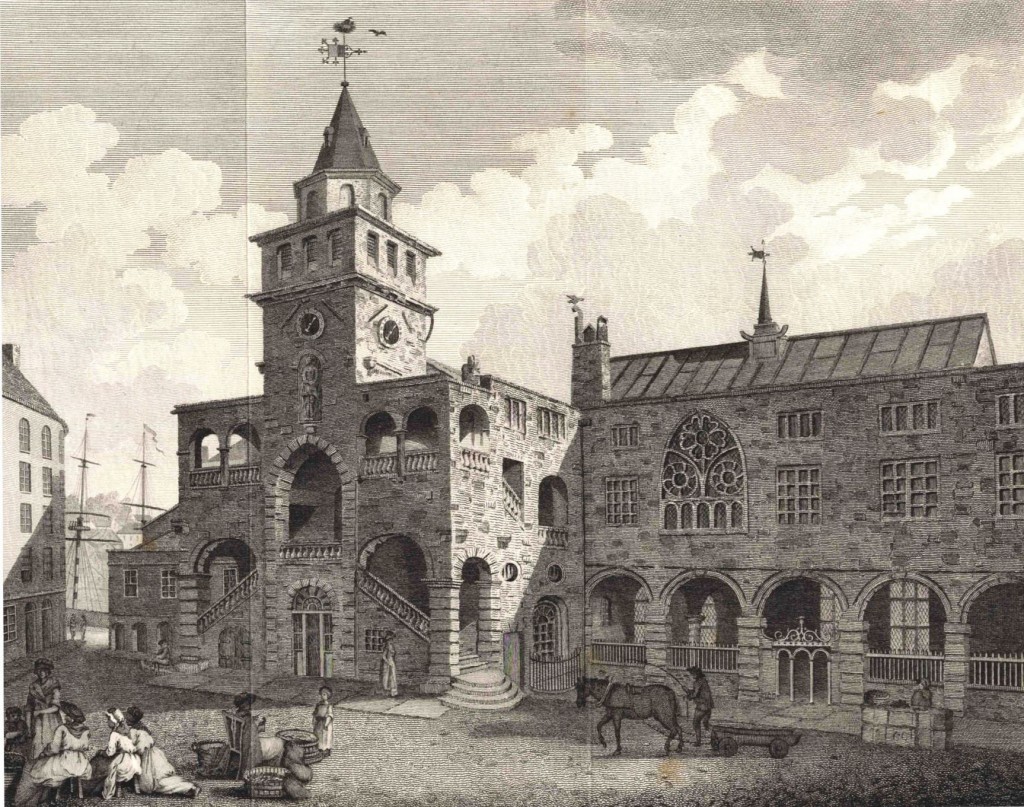 This is the view of the Exchange and its tower from the town side. This print, from a drawing by Edward Edwards, was published in 1789 in John Brand’s The History and Antiquities of …. Newcastle, and shows the nest on the steeple (crows had continued to use the precarious nest site, said Brand). The building, designed by Robert Trollope, mixed Italian Renaissance and Gothic styles, and was built in 1655-58, replacing an earlier building. On the right, we can see the open arches of the Exchange, where corn was bought and sold wholesale. The Guildhall and law court was on the upper floor, along with the tax office and town archives. 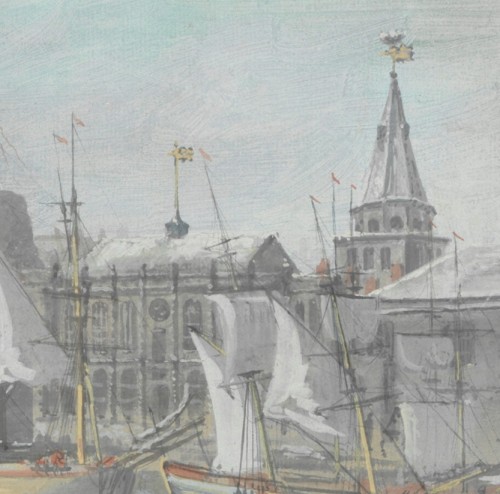 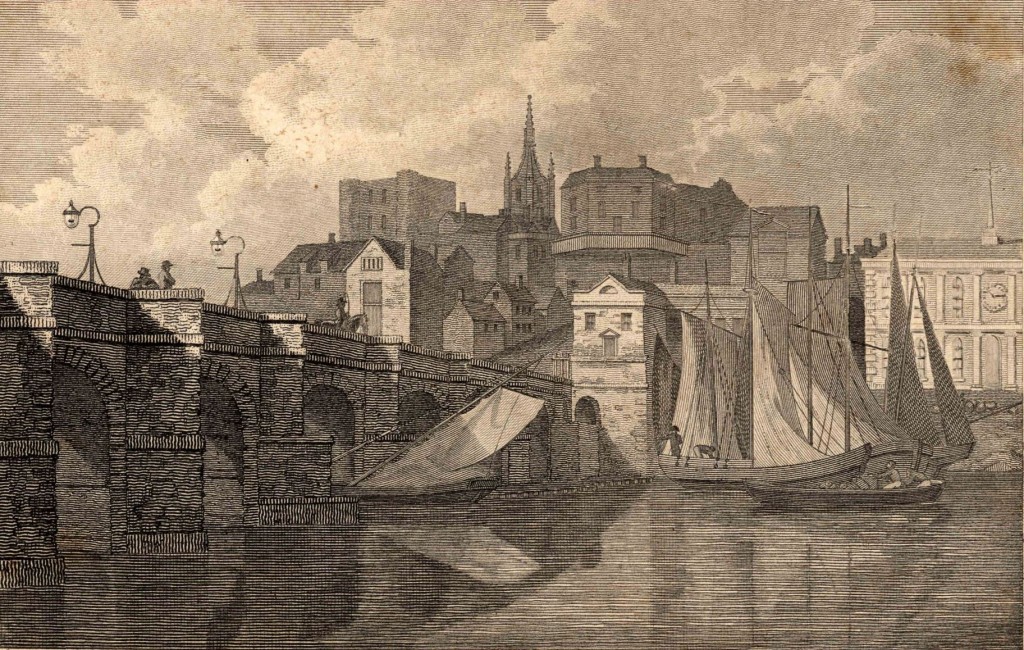 (The prints in this blog and the painting show that John Brand got the river and town frontages of the building confused when he was describing the large window with swirling decoration and balcony, a mistake repeated by Eneas Mackenzie in his history.) 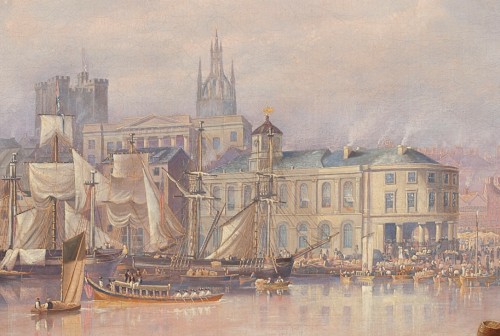 Then, in 1809, the riverside frontage of the old Exchange and Guildhall was remodelled with stone facing in a Classical style (the town side had already been redesigned). A small bell lantern on the roof took the place of the demolished tower. At the east end (on the right), a curved portico of pillars, designed by John Dobson, was added in 1823 to make a new fish market. Some other buildings were cleared away to open up access to the quayside from the town. Eneas Makenzie describes the changes in his Historical Account of Newcastle-Upon-Tyne, published in 1827. This picture detail showing the Guildhall is from John Wilson Carmichael’s View of Newcastle upon Tyne from around 1827 (the angle of view is slightly different from the watercolour view of the Great Frost, so St Nicholas’ Church seems be behind the Guildhall). Carmichael’s impressive painting is on show in Northern Spirit on the ground floor of the Laing Art Gallery.

The painting of the Great Frost is part of a display of snowy views in the All About Area at the Gallery, on until Sunday 19 March 2017. The Laing Art Gallery’s Learning team is running several hands-on workshops for schools, inspired by the snowy scenes and the artists’ varied techniques (details on the Laing website).

References: A Chronology of Notable Weather Events by Douglas V. Hoyt; Wikipedia: Laki volcanic fissure; “The eruption that changed Iceland forever”. BBC News. April 16, 2010;  “When a killer cloud hit Britain”. BBC News. January 2007: British History Online: Historical Account of Newcastle-Upon-Tyne Including the Borough of Gateshead, by Eneas Mackenzie, originally published by Mackenzie and Dent, Newcastle-upon-Tyne, 1827;  The History and Antiquities of the Town and Country of the Town of Newcastle… by John Brand, London, 1789.University of Oxford Text Archive; Local Records: Or, Historical Register of Remarkable Events, Which Have Occurred In Northumberland And Durham Newcastle Upon Tyne And Berwick Upon Tweed, by John Sykes, vol. 1, new edition, 1833, Googlebooks.

5 Responses to The Great Frost of 1784, Newcastle upon Tyne