The first exhibit for the display arrives

Another milestone in the Wagon Refurbishment Project has been reached with the delivery of the first exhibit for the displays, other than the wagons themselves of course. It is also quite a big exhibit….a 1963 Rover P4 model 110 that has been acquired on loan from the National Motor Museum, Beaulieu,  in Hampshire. It was delivered by a specialist car transporter company in an enclosed car transporter early on Friday 23 September 2011 and was received by a small team of curatorial and conservation staff, as well as front of house staff and large object handling specialists from Dowse Cranes, to ensure that it was received and put in its new home safely. The operation of receiving, checking and maneuvering it into place took just under two hours. 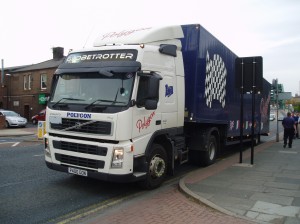 It is 8am and the Rover P4 arrives in its car transporter from Hampshire. 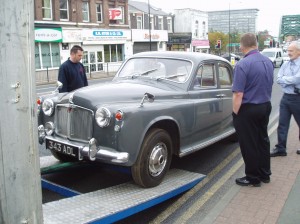 It is carefully offloaded by the driver of the delivery wagon. 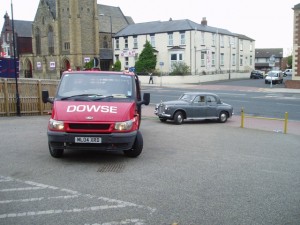 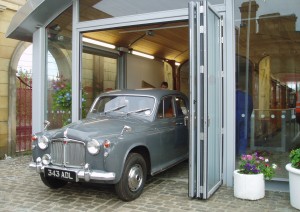 After checking its condition the car is pushed to the ramp through the folding doors that were designed into the building with this type of operation in mind. 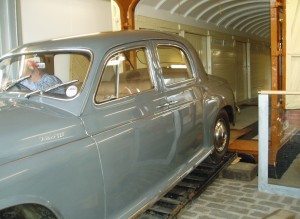 The Rover is connected by its rear axle to the line from the winch and it is slowly hauled up the ramps provided for the occasion into the CCT. 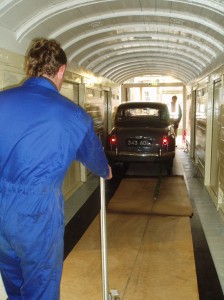 Slowly the car is hand winched into the CCT using a Tirfor winch. 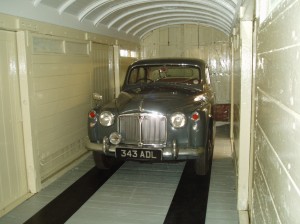 It is 10am and the car is safely positioned in its display position where it will be seen by visitors within the wagon. 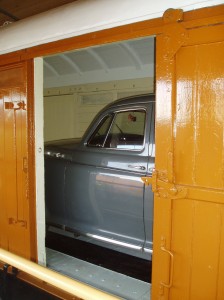 As it will be seen by visitors outside of the wagon through one of the side doors.

The car is typical of those carried on British Railways Motorail services in wagons like our Covered Carriage Truck during the late 1950s and 1960s. As such it is a great object to put on show in the displays.

Made in Solihull, near Birmingham, Rovers were in their time top-of-the-range family cars built to high standards of quality and luxury. They became known as ‘the poor man’s Rolls-Royce’. This model has a 2.6 litre engine and a top speed of just over 100 mph.

It became part of the National Motor Museum’s collection in 2005, having had only one owner, who lived on the Isle of White, from new.