This has just landed on my desk:- 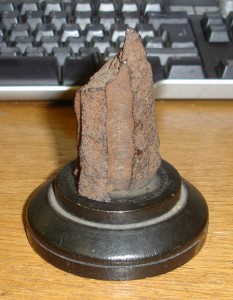 It’s a small, irregularly shaped lump of iron fixed to a wooden base.  They say every object tells a story, but this one has come to me straight from the Mouth of Hell.

That is to say, from the now-finished temporary exhibition at Segedunum entitled Into the Mouth of Hell, about North East mining disasters.  For this innocuous little object is none other than a fragment of the cast iron beam which, at New Hartley Colliery in 1862, broke under stress and caused the deaths of 204 men and boys.

The beam belonged to the pumping engine which kept water out of the mine.  There was only one shaft down to the workings which was shared by the pumping machinery, the miners’ cage, and the gear for raising the coal.  When the beam broke on January 16th, just as the shifts were changing, half of it plummeted down the pit destroying everything in its path (including an ascending cage of miners) and totally blocked the shaft with debris.  Frantic rescue efforts over the next few days could not reach the hundreds of miners trapped below in time and they all suffocated.

It took over 17 hours to remove all the bodies and the churchyard at Earsdon had to be extended specially to accommodate them.

I’ve had some curious objects on my desk over the last few years but this little chunk of iron is by far the most awesome.

Look out for it soon in DiscoveryMuseum’s Working Lives gallery.