The engraving of John Hodgson

H. F. S. Mackreth produced the miniature of John Hodgson for inclusion in Hodgson’s work ‘The History of Northumberland’. This meant an engraving had to be produced from it so that multiple copies could be made for the books. An engraver uses a sharp tool to cut the lines and dots into the metal plate, with deeper incisions producing darker lines in the finished print. When the plate is finished, ink is applied to the plate and then wiped away, so only the ink in the incised lines remains. A piece of dampened paper is then put over the plate and they pass through a roller press together so that the pressure forces the paper into the inked lines.

It was Harriet’s brother, Robert, who organised the engraving of the picture. The cost was estimated to be about 60 guineas, so in 1831 he wrote a circular to those people who were already subscribers to the ‘History’ asking them to subscribe in turn to the portrait to the tune of one guinea each, in exchange for a copy of the print. He managed to get 68 subscribers, including the Bishop of Durham, the Duke of Northumberland, and various Johns: John Buddle, John Clayton, John Dobson and John Adamson.

A close-up of the John Hodgson engraving, showing the use of stipple and line in the engraving. Copyright National Portrait Gallery.

The engraving was done by Edward Scriven, the foremost engraver of the time, who produced about 200 portraits during his career. Instead of using a traditional copper plate he engraved it on steel, a method which had only come into use during the 1820s. While it was much harder to work steel than copper, the metal could take greater detail and would last longer and therefore produce more copies. Scriven used stipple (dots) on the face, for greater variety of tone, and parallel lines for the cloth and background. He also added a border of about 40 lines, slightly further apart towards the outer edge. 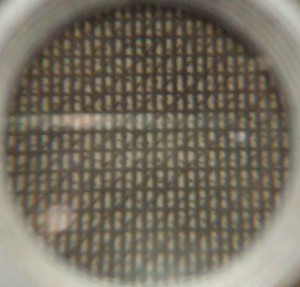 A magnified section of the background line engraving.

Robert Mackreth posted the finished plate to John Hodgson, who wrote back: ‘I cannot account for it, but the parcel containing the plate and impressions, that came last night, needed no other announcement that it came from Newcastle than the great quantity of coal-dust that had insinuated itself into the whole of it – a handful, at least’.

John Hodgson died in June 1845 and by September Robert Currie & Co of Grey Street, Newcastle, were offering prints of the engraving for sale, for 6s, 12s and £1-1-0, ‘to enable his friends to possess a copy of the only likeness extant’. The original steel plate is now in the Laing Art Gallery, Newcastle.

A copy of the engraving is currently on display at Segedunum Roman Fort as part of the Wall Face exhibition.