The construction of the Tyne Bridge in pictures

Since October 1928 the Tyne Bridge has been a familiar sight to everyone entering and leaving Newcastle over the Tyne. John Clayson from Tyne & Wear Archives & Museums takes a look back at the construction of our iconic bridge.

These remarkable photographs were taken by employees of James Bacon & Sons of 81 Northumberland Street in Newcastle, a site which today is part of the Marks & Spencer store.

We don’t know the names of the photographers who scaled the lofty heights of the Tyne Bridge to join the engineers and the steel erectors. We can only wonder at their versatility: one day perhaps in the studio, sensitively arranging a portrait for a treasured family album, the next, exposed on high girders above the river, balancing cumbersome camera and tripod to capture another breathtaking image, as one of the world’s most recognisable structures appeared in the landscape of Tyneside. 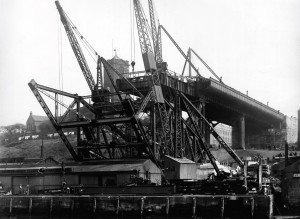 10th August 1927: The first sections of steelwork rise over Hillgate Quay, Gateshead. Most of the girders here are part of a temporary cradle used to support the first three sections of the main arch. When it had done its job in Gateshead the cradle was taken down and shipped over to the Newcastle side to be used again there. Thus the progress of the Gateshead half of the arch was eight weeks ahead during most of the construction period. Looks like it’s a canny day in Gateshead for getting the washing aired. 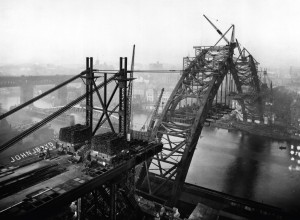 2nd February 1928: As the two halves of the bridge rose over the river they were held back by temporary steel cables fixed to the approach spans. The weight of the approach viaduct helped to balance the arch, but as construction continued more weight was needed. Each of the two rectangular stacks of pig iron ballast or ‘kentledge’ seen here weighs 504
tons. 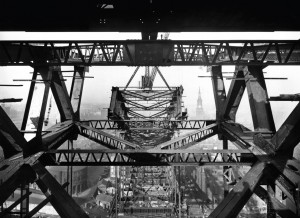 17th February 1928: The bridge was designed in London, manufactured in sections on Teesside and brought to the Tyne by sea. Calculations took account of stresses caused by high winds and a system known as ‘K’ bracing was applied. In front of the photographer, on its side, is one of the K-shaped parts of the structure which have helped the bridge to resist all the Tyneside climate has thrown at it these 85 years or so. 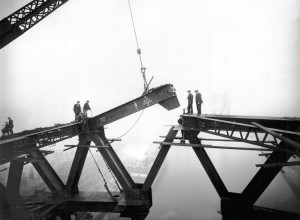 23rd February 1928: The arch is nearly complete as the final section of one of the top ribs is lowered into place 200 feet above the Tyne. The final girder is nine inches (23cm) shorter than the gap it is to fill. By adjusting the holding back cables the two sections of the arch were lowered, almost imperceptibly, until they rested together to take the strain. There was a similar operation taking place on the western arch, alongside the photographer. 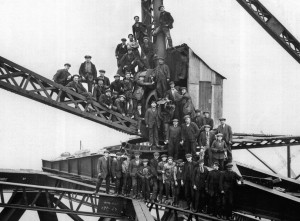 The assembly of the arch took place during the autumn and winter of 1927-28. Steel erectors, riveters and crane drivers perch on the 20-ton capacity crane which has lifted most sections of the Gateshead half of the bridge into place. James Geddie knew these men well. He was their manager and it is likely that he arranged this photograph to mark their role in the completion of the arch. 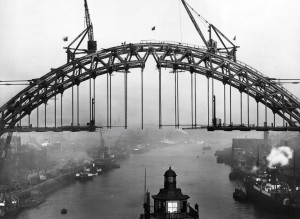 The connection in steel of Newcastle with Gateshead is celebrated by flags flying high above the Tyne. Vessels line the quays, including a pair of paddle tugs on the left. The Tyne Bridge was built without obstructing the navigation of the river even for a single day, the first time such a feat was achieved by engineers when bridging the Tyne. 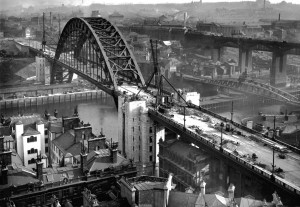 6th September 1928: Only five weeks to go to the opening and the towers are rising from the quaysides. They are important architectural features but they play no part in supporting the bridge. Internally they were intended for warehousing, and there are passenger lifts linking quayside with roadside. On the right, beyond the High Level Bridge, is the rambling Greenesfield Railway Works and Windmill Hills, the skyline pierced by the spire of the Congregational Church on Bensham Road. The smoke of a thousand coal-burning hearths drifts across the centre of Gateshead, blotting out the evening sun. 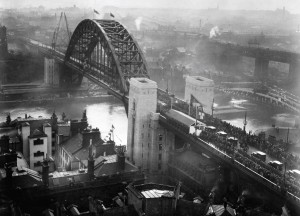 10th October 1928: The opening day has arrived. A guard of honour parades beside the covered stage from which King George V, accompanied by Queen Mary, performs the opening ceremony. It is a joyful, festive occasion. As the royal party arrived “…the air was rent with the cheering of the people, above which were heard the shrieking of the sirens of the ships on the river all in carnival dress, the factory ‘buzzers’, the opening boom of the Royal Salute of 21 guns … and the drone of a Moth aeroplane as it flew low over the bridge.” Thus the RAF began the tradition of flypasts maintained so spectacularly today by the Red Arrows. 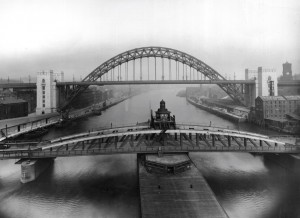 27th March 1929: As the daylight strengthened in the spring of 1929 the photographer took a trip to the High Level Bridge to record the magnificent new span and explore the symmetry of its relationship with the Swing Bridge. Today their harmony is echoed by the Sage Gateshead and the Gateshead Millennium Bridge.

The granite stonework and the freshly painted steel gleam in the hazy sunshine. The time by the St Mary’s Church clock is 2:55pm. It’s a working day – a Wednesday – yet the quaysides are quiet, the cranes are still and the traffic is light.

The total cost of the Tyne Bridge including associated road improvements was £1.2m, of which about one third was for the purchase of land.

The Tyne Bridge was officially opened on 10th October 1928 although work was not finally completed until the end of the year.

The Sydney Harbour Bridge and the Tyne Bridge were designed independently though they were built by the same contractor, Dorman, Long & Co. Ltd. of Middlesbrough.

The top of the bridge can be 200 feet above river level, depending on the tide. The minimum clearance for shipping is 84 feet 6 inches.

The span of the Tyne Bridge is 531 feet (the largest single span bridge in the country at the time of opening).

Prints of some of these photographs can be bought from the Tyne & Wear Archives & Museums online shop: www.twmuseums.org.uk/shop.

6 Responses to The construction of the Tyne Bridge in pictures