My name is Helen Chester and I am a Library Volunteer at the Great North Museum: Hancock Library.  The Library contains the collection of the Natural History Society of Northumbria which is full of fascinating books on wildlife.  I came across a charming and resonant account of the relationship between humans and the natural world from the late 19th Century.

In the summer of 1886, the renowned naturalist and taxidermist John Hancock found two baby hedgehogs on the grounds of his estate at Oatlands in Surrey. 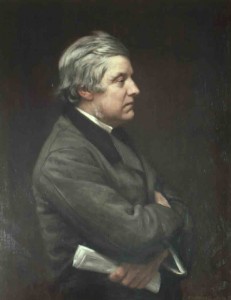 In the article “History of the early life of a hedgehog”, from the Natural History Society’s Transactions, Hancock explains that:

“The young hedgehogs were not able to see or feed themselves, and as their parents could not be found we took them into the house, and a system of feeding them had to be established.”

The baby hedgehogs were found during the evening, on June 30th and were taken into the care of a Miss Rachel M Abbs, a resident of Cleadon, South Tyneside, who was visiting Hancock at the time.  The hedgehogs were called Billy and Peter.  In the book “The Secret Life of the Hedgehog”, Liz Bomford explains that the gestation period for hedgehogs is about 30-40 days.  Hedgehogs give birth to litters from late May through to October, with the month of June seeing a peak in hedgehog births.  September sees mature hedgehogs giving birth to a second litter, and hedgehogs born during the previous year giving birth to their first litter, although these can struggle to survive the winter.  Hedgehogs can have between two and nine babies in a litter.  Like Miss Abbs, Bomford hand reared a baby hedgehog, which in this case, had been born into a litter too large for the mother to cope with.  The fathers don’t tend to have contact with the litter.  New-born hedgehogs need regular feeding and warmth to survive.  As mammals, they do not have teeth when they are born and require milk.  Miss Abbs built an apparatus for the hedgehogs to suckle, which consisted of

“a quill, with a piece of perforated wash leather tied on to the end.” 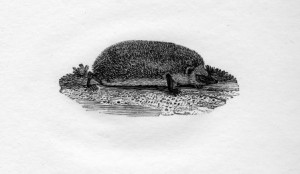 A wood engraving of a Hedgehog by Thomas Bewick

On a happier note, Peter was doing well and travelled with Miss Abbs when she went on a visit to Lincolnshire on July 12th (twelve days after the hedgehogs were found in Hancock’s garden).  He had just opened his eyes for the first time.  This tends to happen at two weeks old.  For the next few weeks, Miss Abbs informed Hancock of Peter’s progress through a series of letters.  Six days after the journey to Lincolnshire, and eighteen days after he was discovered in Hancock’s garden, Miss Abbs was taking Peter (who had developed some front teeth) into the garden every evening and catching insects and slugs for him to eat.

“Peter’s supper last night was five white slugs which he ate with great relish. Moths are his favourite dainty. He will eat small horse flies, but refuses bluebottles. He is very tame, loves to be nursed and kept warm, and likes to nibble and lick my hand if I let him creep about me.”

In the wild a baby hedgehog starts to accompany its mother on foraging trips at between three and four weeks old.

By the time Miss Abbs sent her fourth letter (which was written sometime between July 28th – four weeks after Peter was found – and August 10th – nearly six weeks after Peter was found), Peter had all his teeth and was able to eat finely chopped meat and biscuits soaked in milk.  By August 10th, he had started to hunt for himself and was also foraging for fruits.  Milk now made him sick and he preferred water.  In the wild, hedgehogs tend to be weaned at four to six weeks of age, and start to hunt for themselves at about five weeks.  One particularly amusing story recounts how:

“The other day a spice loaf had been put on to the pantry floor to cool, and Master Peter was found with his fore feet upon it, and a hole eaten in the loaf.” 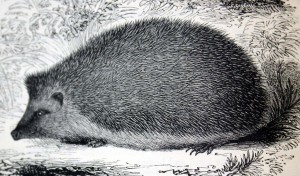 Liz Bomford  explains that hedgehogs of this age often explore different feeding sites and experiment with different food sources.  They specialise in various kinds of food, depending on the chosen feeding location.

Peter travelled to Newcastle with Miss Abbs on September 3rd, and returned to John Hancock’s estate on the 13th, nearly two and a half months after he was first discovered.  At this time he was practically independent.

Peter had become a relaxed and confident traveller and appeared to enjoy his experiences of being transported by train.

“Travelling did not disconcert him at all, as he would come out of the basket when the train was going at express speed, take a drink of milk from a saucer carried for him, and then creep back into his basket.”

A nest was built when he returned, but three weeks later he found his own accommodation in the wild and only came back in the evening for a meal of fruit, bread and milk which was regularly put out for him. 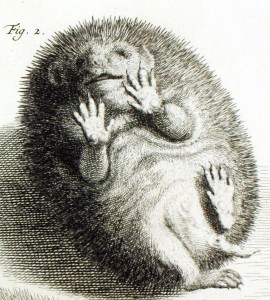 Hedgehog image from an 18th Century book by Albertus Seba

Miss Abbs remarks that there were a large number of hedgehogs resident in the garden at Oatlands. Sadly hedgehogs in the 21st century are experiencing many problems and their numbers have declined sharply. If you find a hedgehog that you think may be in trouble, it is best to seek expert advice as they are difficult animals to look after and should, if required, be hand-reared by an expert.  Organisations that can provide information on this subject include the RSPCA

and the British Hedgehog Preservation Society

One important piece of advice on feeding hedgehogs is that they should never be given milk to drink, as Peter was. This is harmful to them and they should only be provided with fresh water.

If you would like to read the full account of the story of Peter or any of the books listed below, they are all available at the Great North Museum: Hancock Library and can be loaned if you are a member of the Natural History Society of Northumbria.  The Library has a wonderful collection of material on the natural world, local heritage and archaeology. The images of hedgehogs included in this blog are all from books in the NHSN collection.  The Library is free to use and open to everyone. Further information can be found on the following website.