I am a PhD student at Newcastle University, currently in my third year and I have recently started a placement experience at Tyne & Wear Archives & Museums (TWAM) for the Unlocking our Sound Heritage Project.

My area of research is Early Music Pedagogy. In a nutshell, I look at primary sources (i.e. music treatises from the 16th century) to learn how music was studied back then, and compare it to how it is studied now.

Usually relying on ancient manuscripts and early print sources (or on modern recordings and performances) to experience the music I study in my field of research, it is particularly interesting for me to have the opportunity to relate to different kinds of musical documents as witnesses of a more contemporary era of music history. In this post, I am going to share my experience and some of my thoughts during my time here at TWAM.

Lately I had the opportunity to listen to some of the recordings from the British Music Collection which especially comprises recordings of contemporary music (c.1980s to 2000s). The collection is from Heritage Quay, the official archive for the University of Huddersfield, which acts as the guardian of archives of other organisations, families and individuals dating back over 200 years. The aim of this particular collection, in collaboration with the British Music Information Centre and other organisations i.e. the Society for the Promotion of New Music, is to promote contemporary British music. 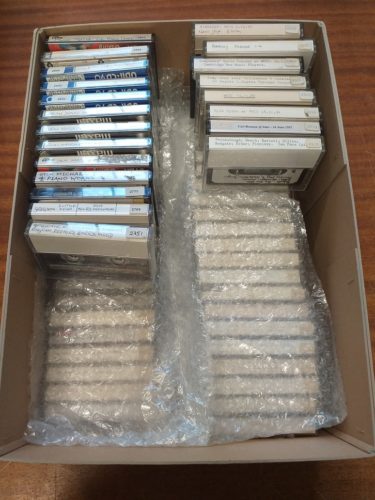 The Unlocking our Sound Heritage Project has digitised 65 compact cassettes, archived at the British Library as audio files.

The first document I encountered was the registration of ‘Woman’s Life’ by Alan Bush, performed by Sylvia Eaves and Priscilla Stewart (05/02/1991); the theme of this song cycle is the life of women and their relationship with work. Immediately after, I started to look for recordings of performances of music written by women, finding various examples. Worth mentioning is the recording of a piano recital by Martyn Dyke that includes only works by women composers: Madeleine Dring, Ruth Gipps, Morfydd Owen, Freda Swain and Madeleine Dring (20/02/1992). 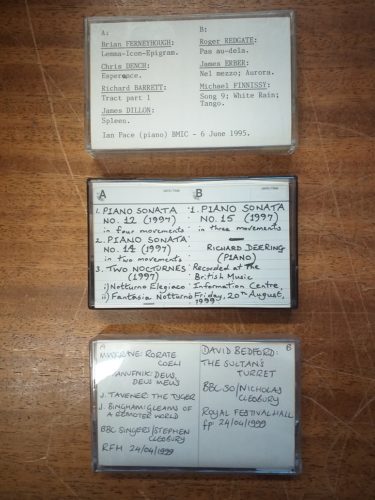 Three cassettes from Heritage Quay at the University of Huddersfield

The performance of a music composition is always different, and this is particularly true for pieces of music that involve a component of improvisation. An example of the recording of an improvisational performance in the collection is the piano recital by John Tilbury at the British Music Information Centre, London (20/11/1990), where he performs improvisations on Cornelius Cardew’s ‘Ah Thel’ (1963), and on Hanns Eisler’s Der Mensch (1942).

When listening to these recordings, it sometimes happens that a registration is cut abruptly, and a fragment of a different concert, a previous recording, suddenly appears. For example, the recording of a concert with music by William Baines (26/03/1992), performed by N. Duncan (piano) and Julia Frape (violin), is cut in the interval and suddenly we hear a fragment of what seems to be a performance of The Little Sweep by Benjamin Britten. This immediately takes me back in time, before the widespread diffusion of the internet as an aid to listening to music, to when people would record music via cassettes whilst listening to the radio, sometimes mistakenly erasing a previous registration. 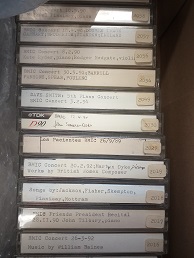 I myself still have my own collection of cassettes: a patchwork of fragments of songs carefully stored somewhere in my house…

Unlocking Our Sound Heritage is funded by a grant from the National Lottery Heritage Fund, as well as generous funding from charities and individuals.

One Response to The British Music Collection from Heritage Quay at Huddersfield University – by Carmela Barbaro, Placement Student