The Boldons are a group of three South Tyneside villages – East Boldon, West Boldon and Boldon Colliery – located to the south of the Borough of South Tyneside, heading towards Sunderland.

In 2014 the British Library loaned one of its most treasured items – the earliest surviving copy of the 12th century ‘Boldon Book’ – for display at South Shields Museum & Art Gallery. Created in 1183 as a survey of the Bishop of Durham’s lands in Northumberland and Durham, the Boldon Book has been called the ‘Domesday Book of the North’. It was the first survey of settlements north of the River Tees, an area that was omitted from the Domesday study. Only four early manuscript copies of the Boldon Book survive. 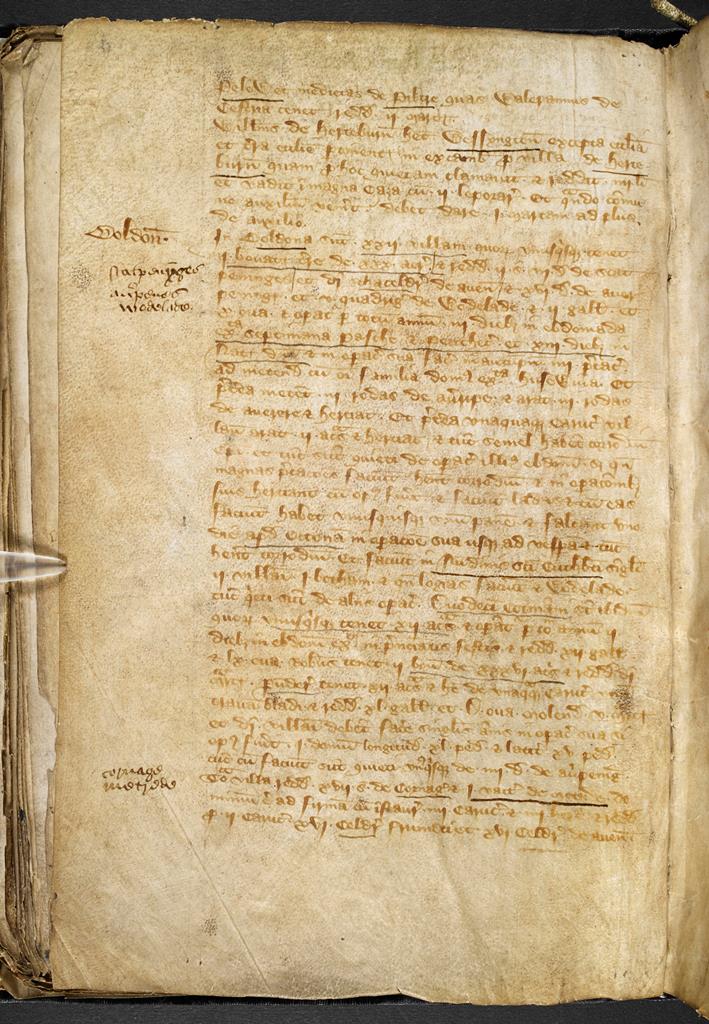 The entry for Boldon in the Boldon Book. Image courtesy of the British Library.

The township of Boldon is one of the book’s earliest entries, listing how many days of the week people had to work for the Bishop, how many hens or cattle they had to give him and how much money they owed. The book gets its name from later entries in the document, which use “as at Boldon” as short-hand.

The loan of the British Library’s Boldon Book in 2014 helped to raise awareness and stimulate interest in the Book and its importance to the Borough. This year Tyne & Wear Archives & Museums are working with local community groups and schools to capture their responses to some of the themes raised by the Boldon Book (such as society, commerce, and citizenship), marking a moment in time just as the Boldon Book did.

Outcomes from the project will be highlighted in an exhibition at South Shields Museum early next year, which will include the loan of another priceless early manuscript of the Boldon Book, alongside enhanced interpretation.

My colleagues were keen to know what we had in the museum collections relating to the villages of East Boldon, West Boldon and Boldon Colliery. I consulted the catalogue and turned up some lovely items, which I’d like to share with you in this blog. The items were all either owned by or associated with people who lived or worked in the villages, relate to an aspect of life in the Boldons, or depict the villages and their people in photographs or artworks…

This postcard, showing a view of Front Street, East Boldon, was sent to Mr & Mrs McKendrick in December 1904, “with best wishes to all for the season”. 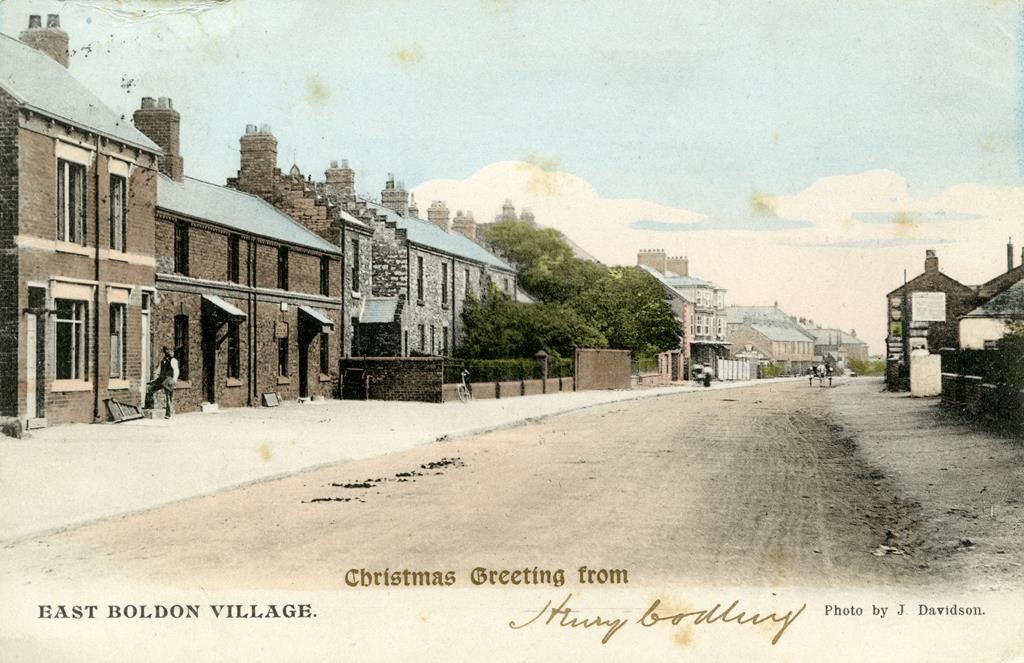 This is a sentimental and tranquil depiction of life in Boldon in 1897. The simple composition and dream-like purples and blues of the sky give the picture a feeling of calm. 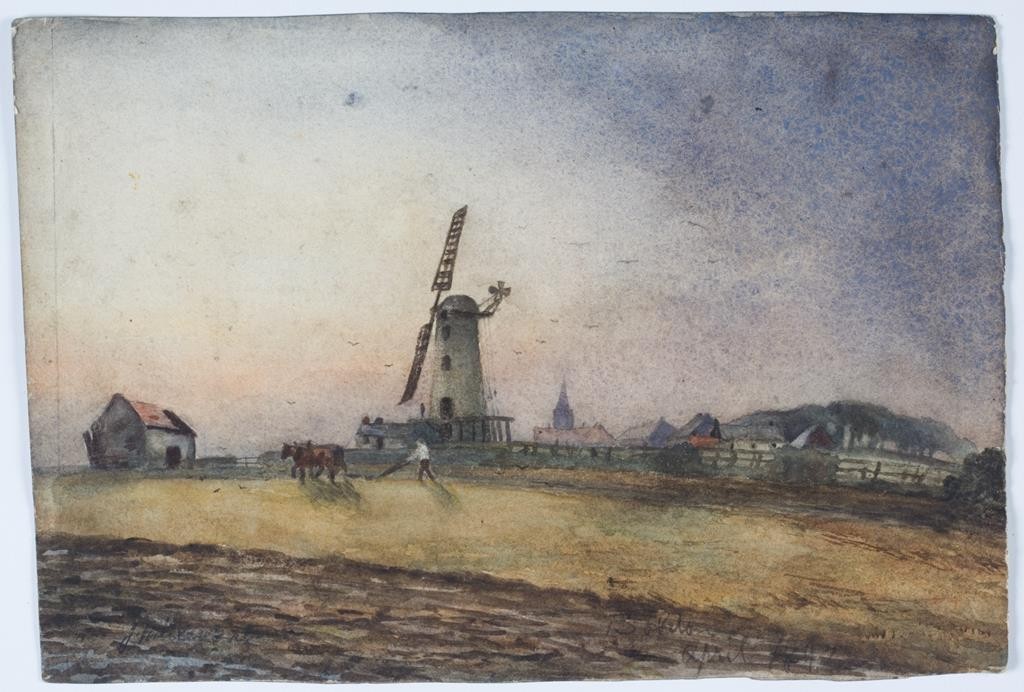 A pair of egg cups in the shape of rabbits, owned by ‘Billy’ and ‘Margaret’. These were given to the museum in 1997 by Miss M. Armstrong of West Boldon. 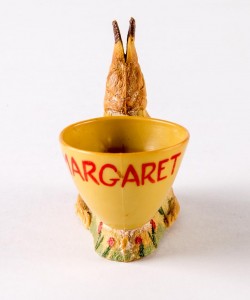 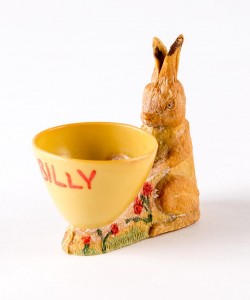 A tea cup, saucer and side plate decorated in a grey-blue transfer printed design of flowers and birds. The design is called ‘Cottage Rose’. These were specially manufactured by Enoch Wedgwood for Ringtons – the Newcastle tea merchants – and could be obtained from the firm by saving up coupons issued with their packets of tea. The trio was owned by Mrs Mary Arrowsmith (née Hutchinson) who grew up in Boldon Colliery in the opening years of the 20th century. Her first name was actually Griselda, but she was called by her middle name. Mary lived in Boldon Colliery all her life. Her husband worked at Harton Farm. 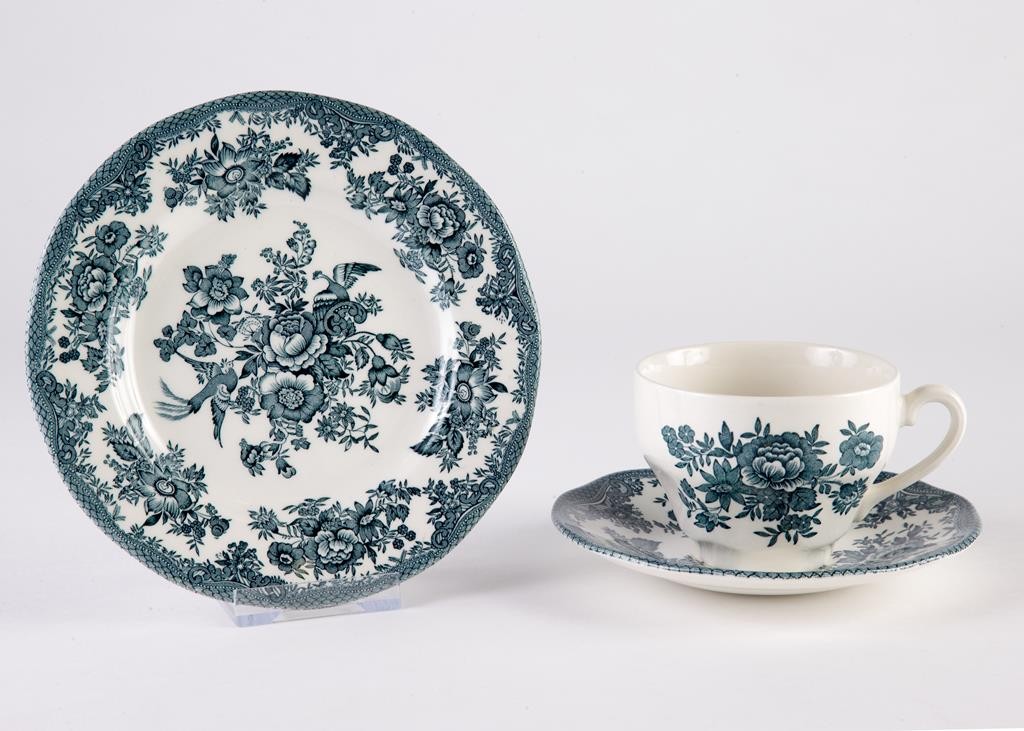 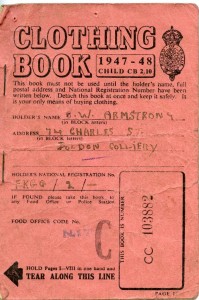 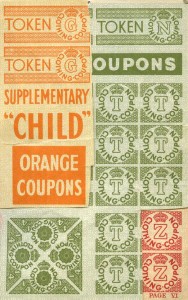 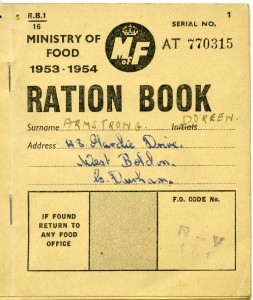 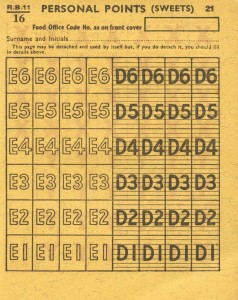 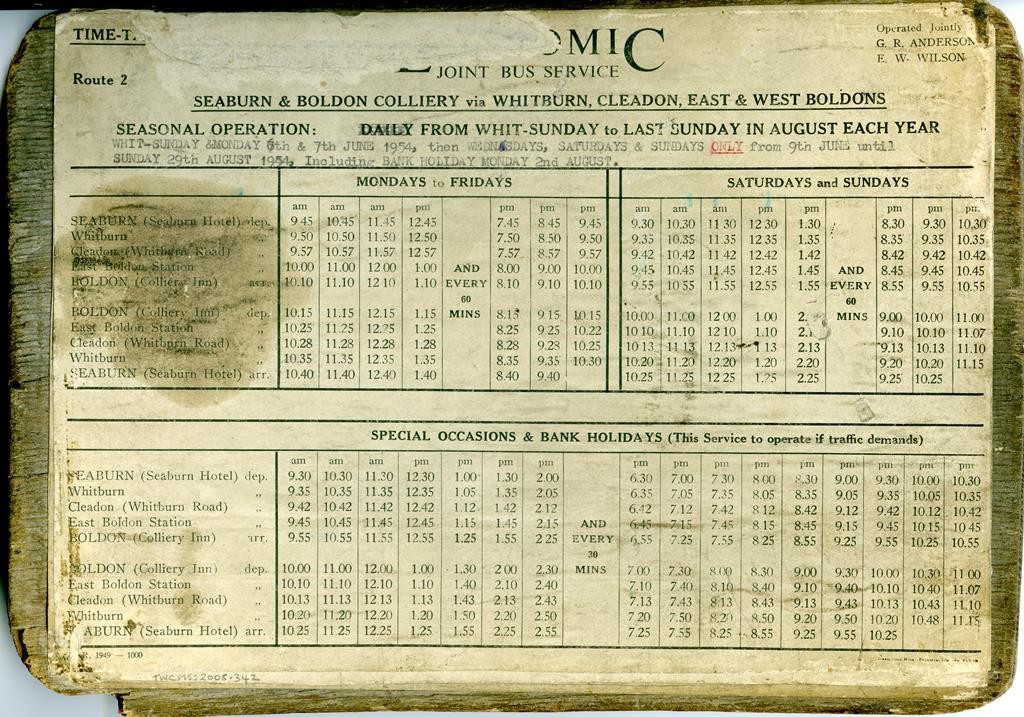 A group photo of men and women at a fancy dress ball at the Miners’ Hall, Boldon Colliery, dated 1921. 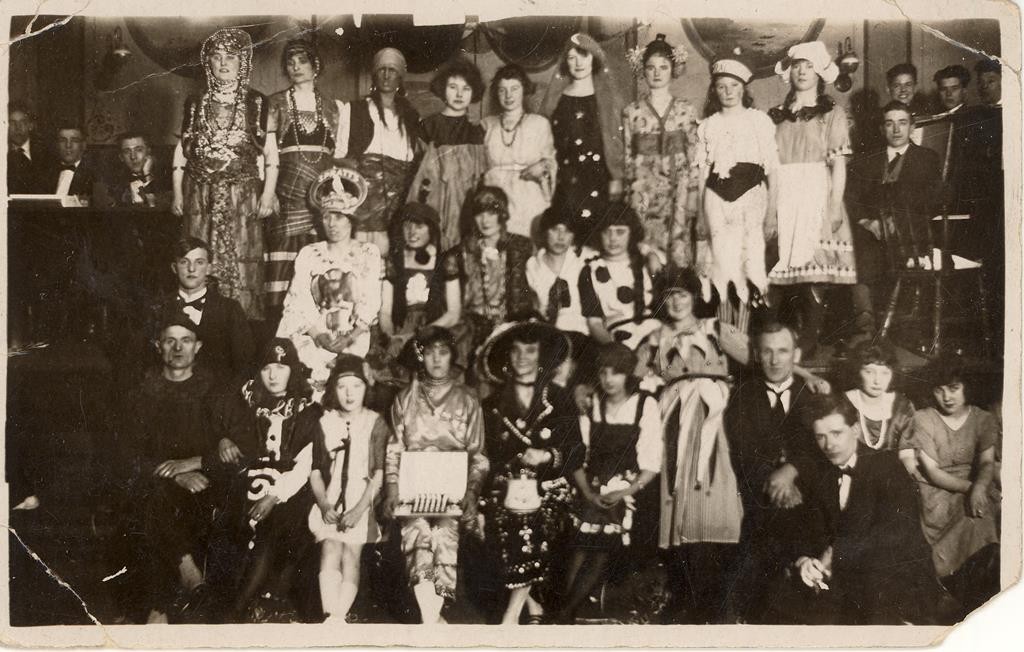 This coal was mined at Westoe Colliery, South Shields. Drew Robertson worked there from 1980 until 1994. Each New Year’s Eve, according to the Scottish tradition of Hogmanay, he would give his neighbours in Boldon Colliery a piece of locally mined coal to symbolise warmth, a cake symbolising that the household should never go hungry and salt, symbolising wealth and prosperity. 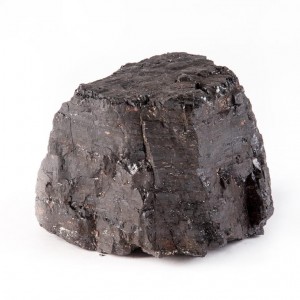 Frederick Carroll started his working life in Boldon Colliery, but he ran away to sea aged 16. This toiletry set was presented to Frederick by the Mayor of Jarrow, for his actions on board HMS Exeter during the Battle of the River Plate in 1939. This was the first major naval battle of the Second World War, when three allied warships took on the formidable German battleship the Admiral Graf Spee off the coast of Argentina and Uruguay. Frederick was mentioned in dispatches following the engagement; he went on to become a torpedo expert and his whereabouts during the War were always secret. 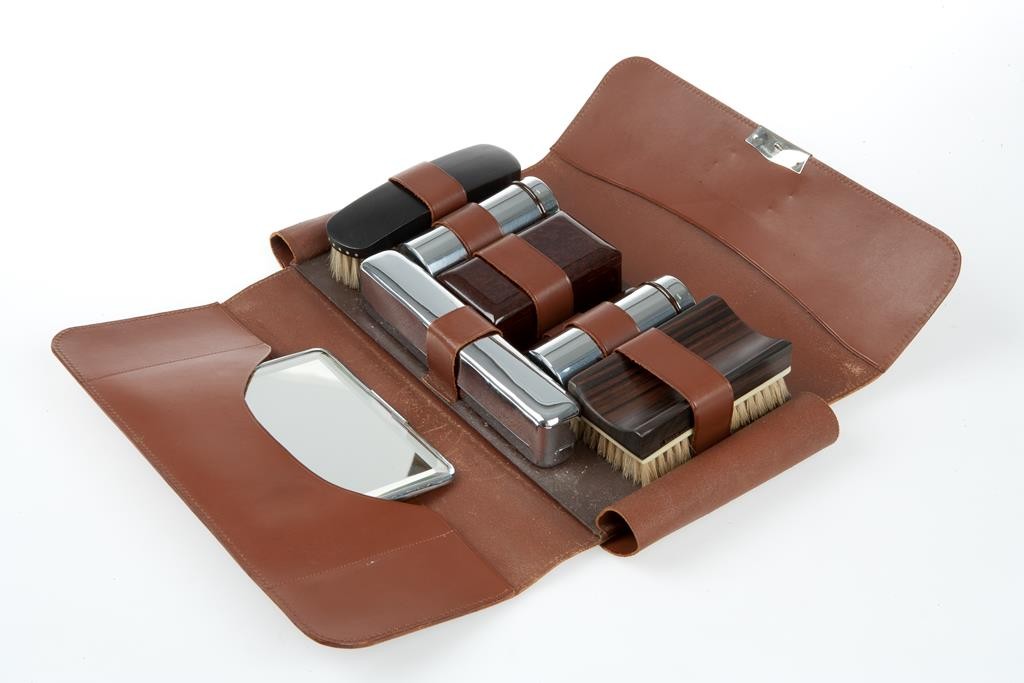 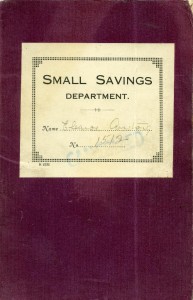 An ‘Edmondson’ type railway ticket for a 2nd class single journey from South Shields to East Boldon. The fare was 1s 1d. 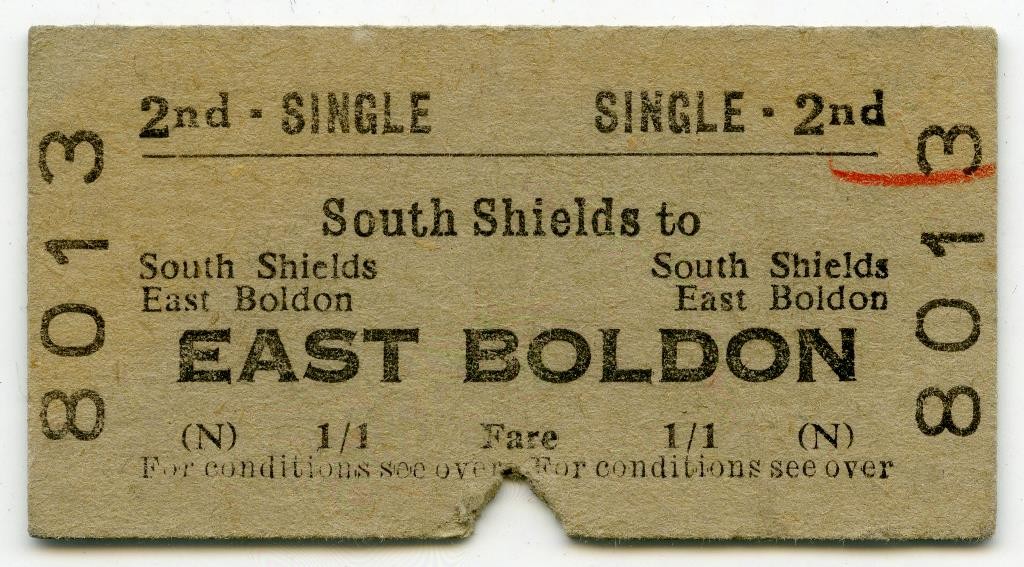 A magazine titled The Boldon Book, being the parish magazine of St. Nicholas Hedworth, St. Nicholas West Boldon and St. George East Boldon. Includes news of a garden fete: “The morning of July 7th was dull and showery, but at mid-day the clouds began to clear and by the time Mrs. E. Harrison declared the Fete open the sun was shining and all was bright and cheerful”. Divine intervention, perhaps?! 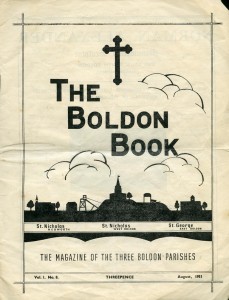 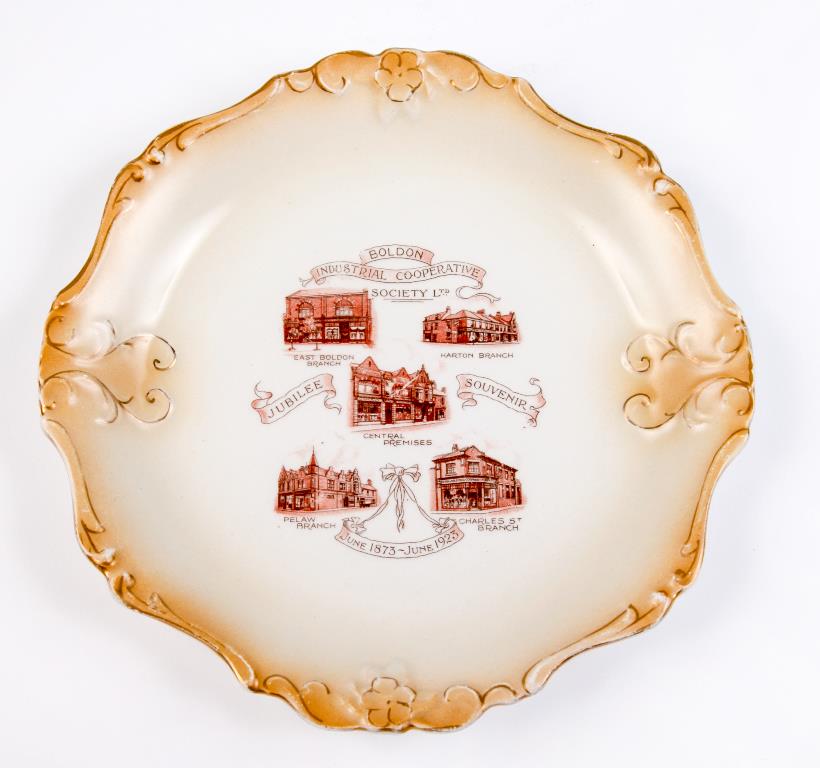 A ‘Form of Contract, General Conditions and Specification for the Construction and Completion of 65 Dwellinghouses for Aged Persons on the Boldon Colliery Housing Site’. Specifications included: “All plastered wall surfaces are to be clearcoled and twice distempered with washable distemper of approved manufacture and tints. The coalhouses, sculleries, and larders to be twice lime washed.”, “Provide in scullery a Belfast pattern glazed stoneware sink 27in. x 18in. x 10in. with brass waste plug and chain and fix same on strong galvanised or coated iron brackets.”, “Provide and fix galvanised iron Clothes Hooks of approved design, two per house.”, “Provide and properly set in Living Room a Yorkshire Range, with side Boiler and Tap, p.c. £7 5s 0d., also Bedroom Register, p.c. £1 5s 0d.” 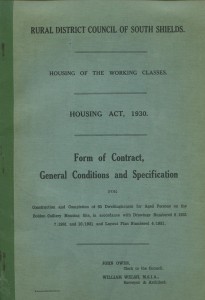 A First World War memorial plaque presented to the next-of-kin of Private George William Frame, 8th (Service) Battalion, Northumberland Fusiliers, who had worked at Boldon Colliery prior to his war service. 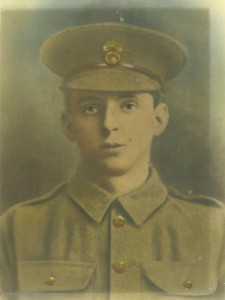 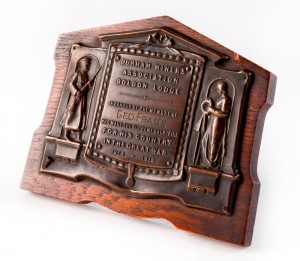 Memorial plaque presented by the Boldon Lodge of the Durham Miners’ Association to the next of kin of George William Frame. TWCMS : 2014.2112

A bed at the Ingham Infirmary, South Shields, was endowed in memory of Miss Isabella Lawson of Pikeshole Farm, West Boldon, in 1929. 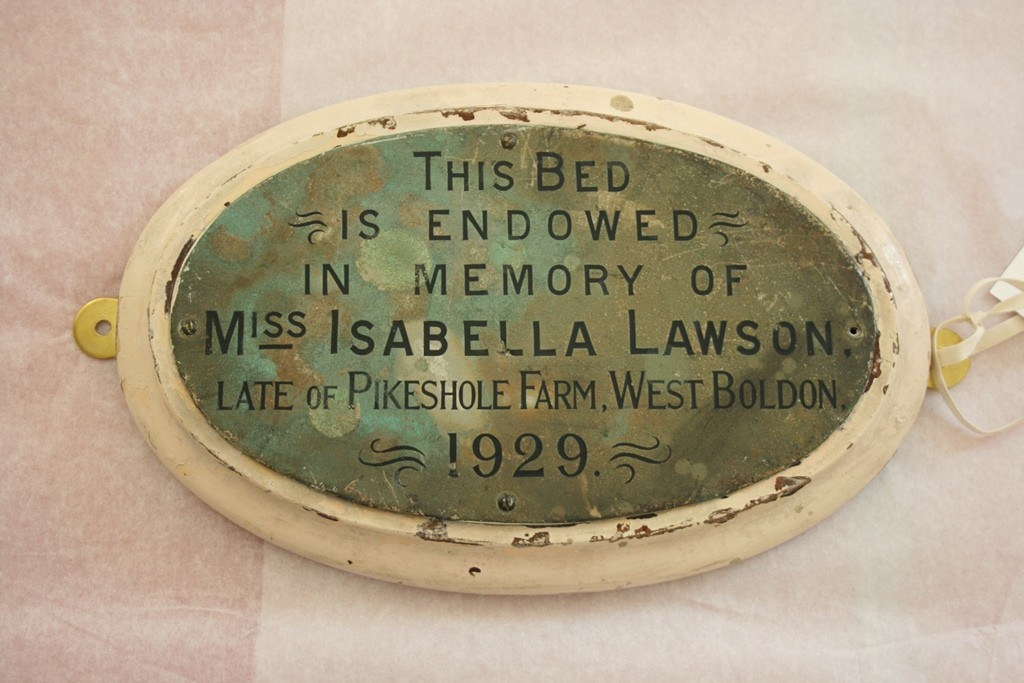 This photo, originally published in the Newcastle Evening World, shows members of Boldon Amateur Operatic Society in a scene from their production of the Gilbert & Sullivan opera The Yeoman of the Guard – set at the Tower of London in the 1500s. 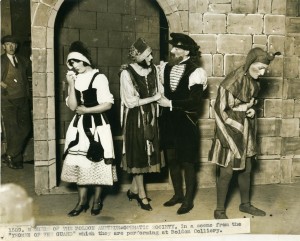 A Boldon Amateur Operatic Society production of The Yeoman of the Guard, about late 1920s. TWCMS : 2016.387

A programme for the formal opening by Councillor G. Robinson of the West Boldon Residential Nursery at 33 Tennyson Avenue, Boldon Colliery, on Monday 18 September 1961. The first of its kind in the north of England, the nursery was different from others in the area in that it was intended to accommodate 12 children under three, and because it had been built on a housing estate. The majority of nurseries at the time catered for up to 25 children. Those at West Boldon nursery were intended to be from families where, perhaps, mother was in hospital or there was other temporary domestic upheaval. After the official opening, the civic party repaired to North Road Infants’ School for tea, buns and speeches. 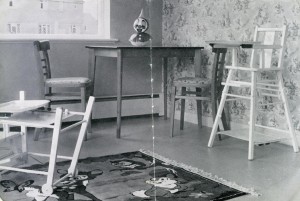 South Shields Museum & Art Gallery collects and displays items relating to the people and places of South Tyneside. As well as South Shields and Jarrow, which are currently well represented in the museum, we also collect items with a link to Hebburn, Whitburn, Cleadon, the Boldons and all the Borough’s other locales and neighbourhoods. My Boldon rummage revealed that, while we have some fascinating items, we don’t have as much relating to that area of the Borough as we’d like. We’d be delighted to hear from anyone who would consider donating anything Boldon-related, so please get in touch if you think you can help!