The Berengaria visits the River Tyne

Over the past couple of months, work has been progressing steadily on the ‘Workshop of the World’ project. I’ve been working through the large quantity of unlisted material in the Vickers Armstrong collection and there have been lots of interesting finds. Perhaps the most unexpected was a series of four photographs of the ‘Berengaria’, one of the greatest passenger liners of her day. 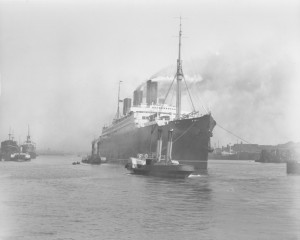 She was launched in Hamburg in May 1912 under the name ‘Imperator’ and at that time was the largest ship in the world. The vessel spent the First World War moored at Hamburg but soon afterwards was handed over to the United States Shipping Board to transport American troops back home.  She then passed to the British authorities as part of the war reparations for losses suffered during the War. ‘Imperator’ was bought by the Cunard Line in 1919 and became the firm’s flagship, joining other great vessels of the age ‘Mauretania’ and ‘Aquitania’ on the trans-Atlantic crossing from Southampton to New York.

Cunard soon renamed her ‘Berengaria’ and in 1921 she was sent with ‘Aquitania’ to the Walker naval yard of Armstrong Whitworth, where both were converted from coal to oil burning engines and various minor repairs were carried out.  The photographs in the Vickers Armstrong collection must date from this conversion and include a view of the vessel passing the shipyard of Swan Hunter & Wigham Richardson.

There’s also an interesting local connection to the ‘Berengaria’s new oil burning system, which was invented by the marine engineer, William Albert White. White was born in 1897 in Sunderland and studied at South Shields Marine School before serving his apprenticeship with the Middle Docks & Engineering Co. Ltd. He obtained his chief engineer’s ticket and then found employment with the Parsons Marine Steam Turbine Co. Ltd at Wallsend, where he was actively involved in the development of the steam turbine. Indeed he served as chief engineer on the SS ‘Turbinia’ when she crossed the Atlantic in 1904. That vessel was built by Hawthorn Leslie and shouldn’t be confused with its illustrious namesake, now on display in theDiscoveryMuseum. 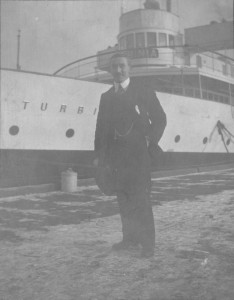 White stayed in America for a number of years before returning to the United Kingdom in 1916 with his family. He made several highly successful inventions, most notably the White Low-Pressure Oil-Burning Engine, which was fitted in ‘Berengaria’. His firm, the White Patent Oil Burning Co. Ltd, established an engine works at Gateshead in 1920. The firm relocated soon after to South Shields before finally settling at Hebburn in 1923.

After the conversion ‘Berengaria’ went on to have a fine career until a fire on board in March 1938 led to the discovery of defective wiring. Her owners took the decision to dispose of her and she returned once more to the River Tyne to be broken up at Jarrow. The Second World War intervened and her dismantling was not completed until after the War in Rosyth. This was a sad end but the discovery of these photographs in the Vickers Armstrong collection is a happy reminder of a great ship in her pomp. 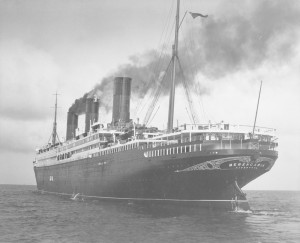 2 Responses to The Berengaria visits the River Tyne