Ten Drawings by Leonardo da Vinci, star of the Renaissance, at the Laing Art Gallery 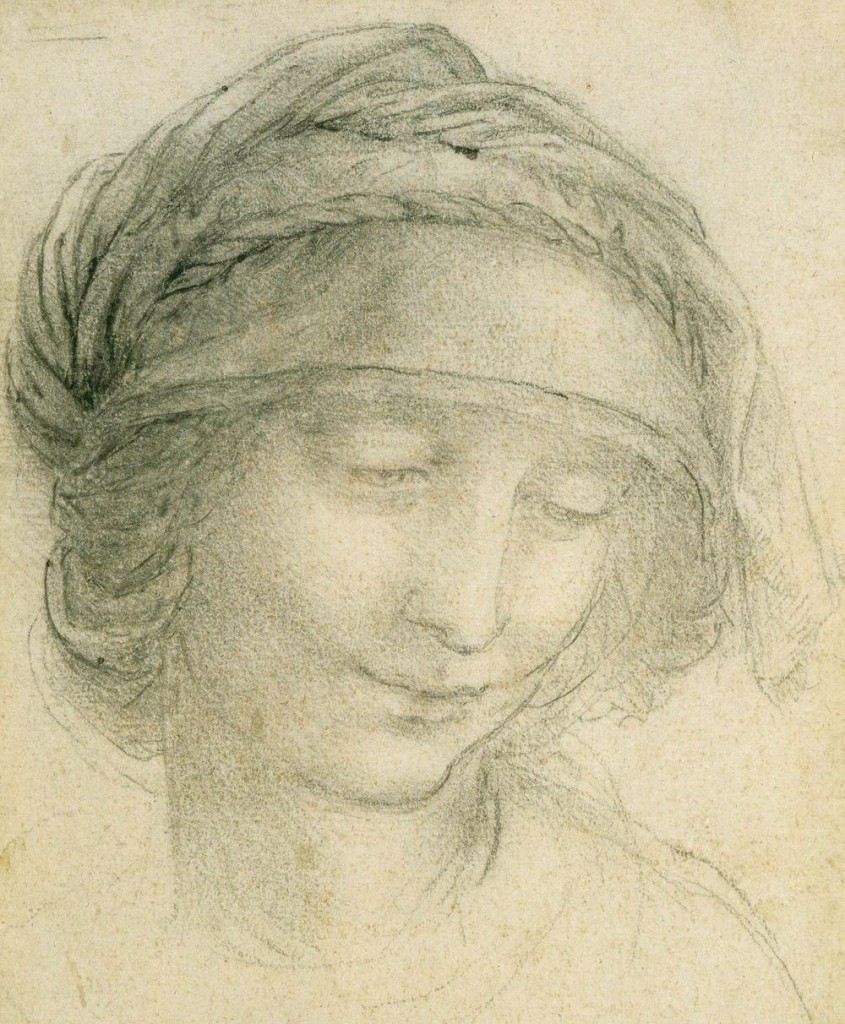 Leonardo da Vinci was a handsome man – the early accounts all comment on his good looks. He was also amazingly talented – only Michelangelo challenged him for supremacy in painting and drawing. In addition to his artistic achievements, Leonardo also made significant new discoveries about human anatomy, was consulted as an engineer, and developed extensive theories about the natural world. Leonardo drew tirelessly, recording his observations and planning his projects. His exceptional skill is shown in his chalk drawing of the Head of St Anne, with soft shading to capture the fall of light, emphasised in places with a sharpened chalk point. St Anne is one of ten outstanding drawings from the Royal Collection on show at the Laing Art Gallery (February 13 – April 24). Together, they allow us a window into the way Leonardo thought and the development of his drawing skills, as well as his many interests and some of his big schemes.

On Thursday 14 April, the Royal Collection exhibition curator, Martin Clayton, will be giving a lunchtime talk on Leonardo through his drawings (12.30-1.15pm, £4, book online or at the gallery). His talk is full of fascinating insights and discusses the unparalleled range and diversity of Leonardo’s drawings throughout his career. 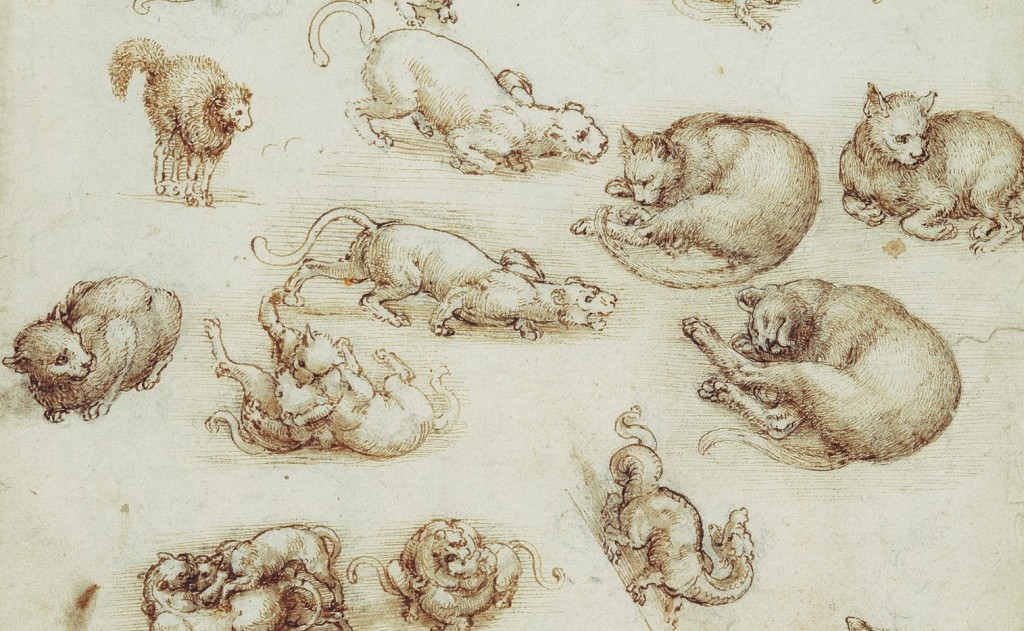 We get a glimpse of Leonardo’s playful side and his love of animals in a page of studies of cats stretching, grooming, watchful and asleep. One animal arches its back, fur bristling in alarm, almost as if it’s frightened by the powerful lionesses Leonardo added in the middle of the page. And there’s also a little dragon, made up, Leonardo said, from ‘the brow of a dog, eyes of a cat…and neck of a water tortoise.’

Leonardo was born at an exciting time for an artist of his talents. He trained in Florence, one of the great cultural centres of the Italian Renaissance. Even being barred from university – due to his illegitimacy – played in his favour. True, it prevented him from being taught Latin, the language of scholarship of the time. But that meant that he was pushed more to rely on original observation rather than the theories of previous scholars. 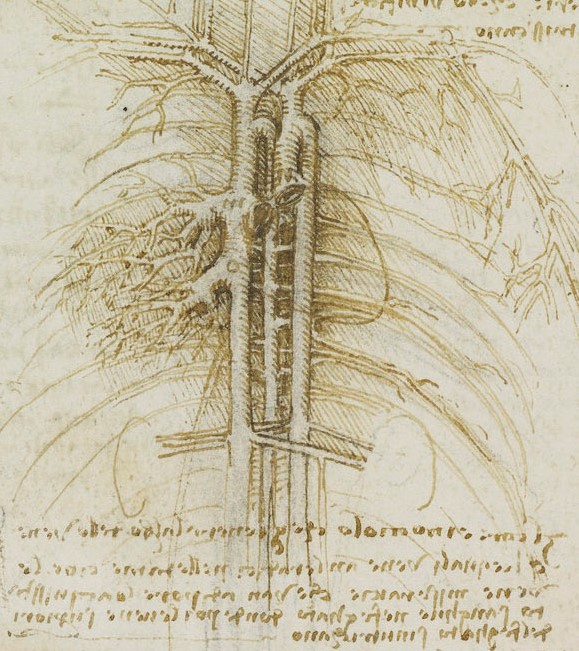 The area where Leonardo made some of his most important scientific observations was anatomy. The exhibition contains a double-sided drawing from his ground-breaking autopsy of the body of a 100-year-old man in Florence. A detail of his drawing of the heart is shown alongside. Dissection was really difficult at a time when there were no preservatives – anatomists had to work fast. Leonardo didn’t get everything right, but he did identify the heart as the centre of the blood system (many at the time thought that veins sprouted from the liver, like a tree). He wrote his notes on the page in his famous mirror writing – which seems to have been just a quirk linked to his left-handedness, rather than an attempt at secrecy. 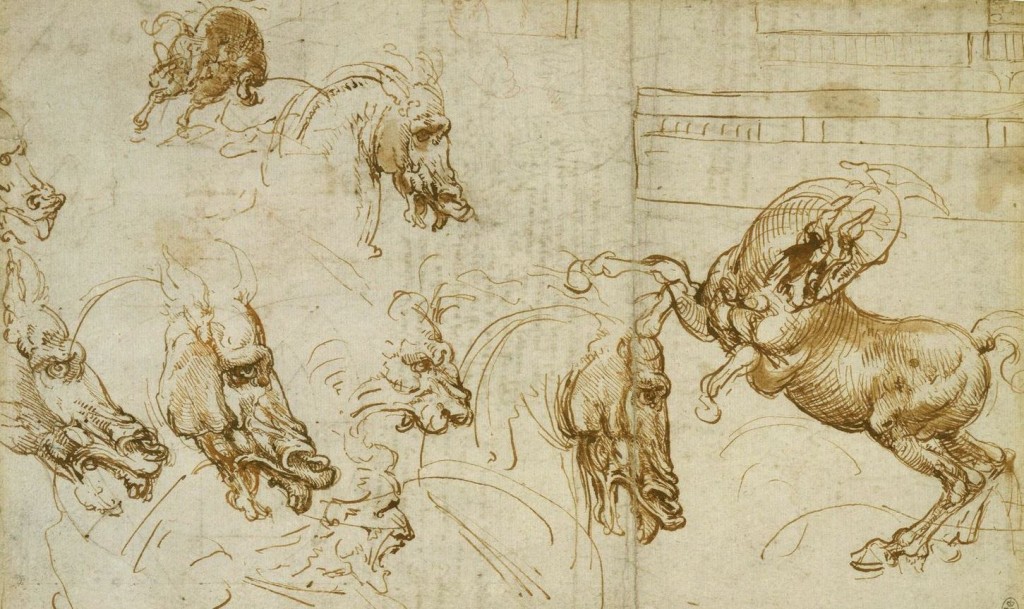 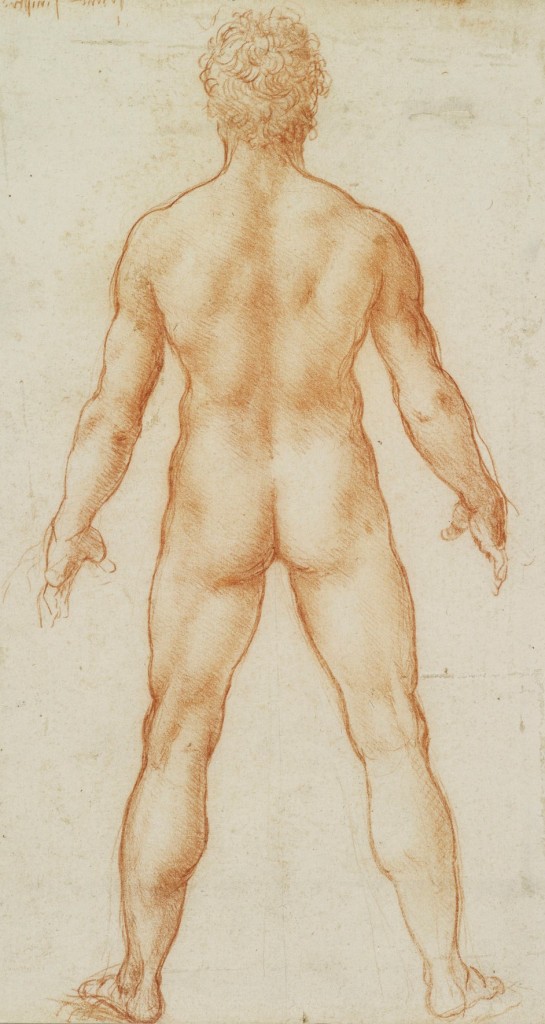 In 1503, Leonardo returned to Florence after many years in Milan. The city council wasted little time in commissioning him to produce a mural showing an historic battle victory by Florence over Milan. Leonardo’s ink drawings of a frenzied horse are studies for this project, showing subtle variations in the way the enraged animal’s eyes bulge and its lips flare. (He also added heads of a snarling man and lion, revealing similarities in muscle structure with the horse.) As part of his preparations for the battle scene, Leonardo also made studies of the male form, carefully delineating the outward appearance of muscles and tendons. (A note that Leonardo added to this drawing suggests that the model was Francesco Sinistre, a musician.) Sadly, the big battle mural was never completed. 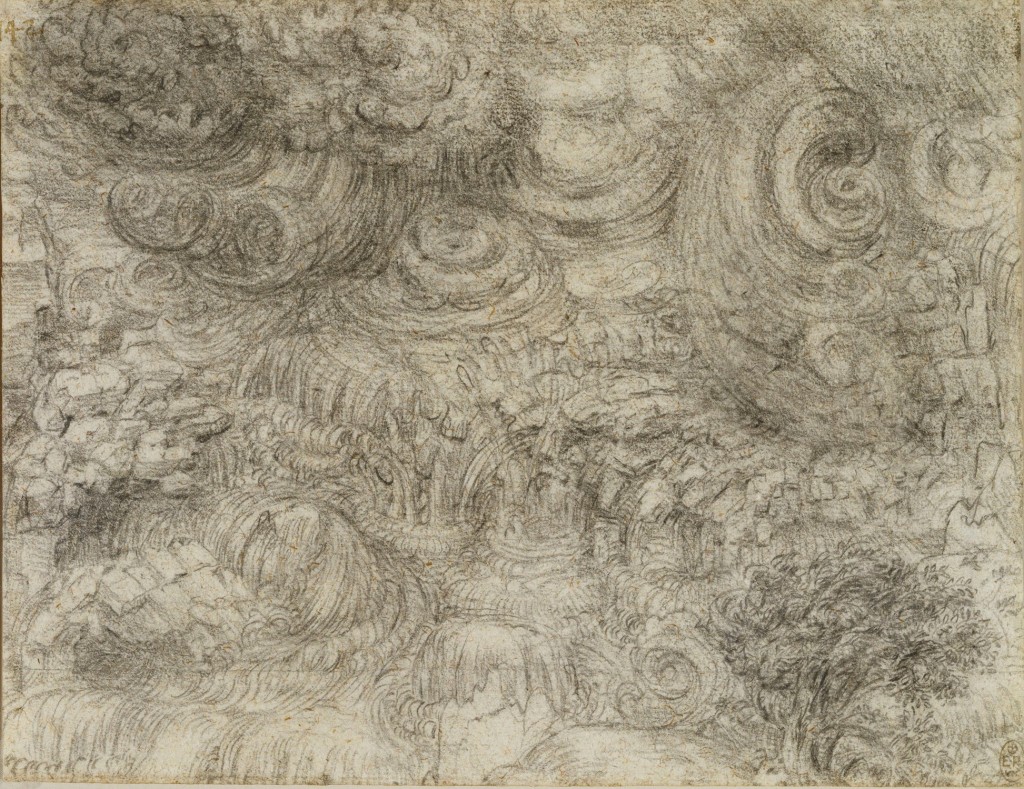 Near the end of his life, Leonardo moved to the court of the king of France. He was in his 60s, living away from his home country. It seems that he was feeling rather melancholic, resulting in a series of end-of-the-world scenes of great storms. In the chalk drawing that ends the exhibition, huge winds coil out of dark rain clouds and rip into trees. The force of water gushing down the mountainside washes great blocks of stone from the ground, and floods overwhelm the land.

The exhibition continues to Sunday April 24th. All the drawings are illustrated here. There is an admission charge of £2.50, with a range of lunchtime talks (Function Room, £3) and exhibition tours (admission and tour ticket £5) – these can be booked online or at the Gallery, and are listed on the Leonardo exhibition page. All funds raised from the sale of tickets, donations and catalogues for this exhibition go to directly support the work of the Laing Art Gallery.

The exhibition showing in Newcastle has been sponsored by the Port of Tyne and supported by the Friends of the Laing Art Gallery.

One Response to Ten Drawings by Leonardo da Vinci, star of the Renaissance, at the Laing Art Gallery