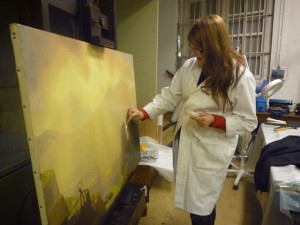 Ana, the museum service’s picture conservator, is making the last cleaning touches to a painting for the new exhibition of pictures from the Laing’s collection. She’s using moistened cotton wool wound around a special cleaning stick – a painstaking job. The picture was painted by Lake District artist Delmar Banner, and shows a spectacular sunburst over Scafell and surrounding peaks. The picture is now on display in Sun, Wind and Weather, which opened very recently. The sunny scenes on display are an antidote to winter conditions outside at the moment. However, it’s not just all summer sun – the exhibition shows how artists have been interested in painting all kinds of light and weather, from mist and cloud to morning and evening light. This blog shows photos from the installation of the exhibition. 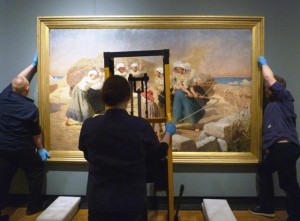 This was one of the trickier pictures to hang so that it looks straight, as the picture sides are just not at right-angles. Some of the pictures are really heavy, yet very delicate at the same time, so they need great care in handling to make sure that we do it safely for both installers and the painting. The staff are wearing gloves to avoid marking the frames. 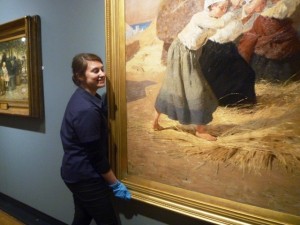 Gemma keeps a steadying hand on the frame as the fixings are put in place on the other side. But she doesn’t have to hold all the weight of the picture herself – it’s supported by a pair of sturdy brackets.

This picture portrays French farm women in the second half of the 19th century. It shows that some Realist artists were interested in capturing the visual effect of full sun in outdoor scenes just as much as the Impressionists, though they took a different artistic route. 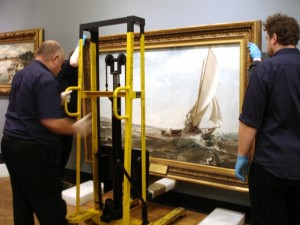 In contrast,  it’s all about pleasant sunshine and a fresh breeze in this picture. The artist Charles Napier Hemy (born in Newcastle) loved sailing, and made studies in his floating studio on a converted boat. He painted this picture, entitled Through Sea and Air, in Cornwall, and it was tremendously popular with art lovers at the 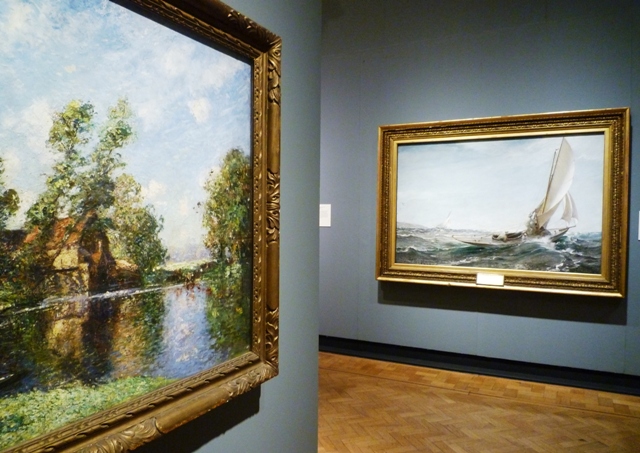 Hemy’s picture is now in position on the wall. On the left of the photo, we can see a beautiful sunny scene in the ‘British Impressionist’ style of the early 20th century, in which the artist has created the impression of brilliant light using separate small brushmarks of colour. Sunlight shining through leaves and sparkling on water featured in many pictures by artists influenced by Impressionist art. 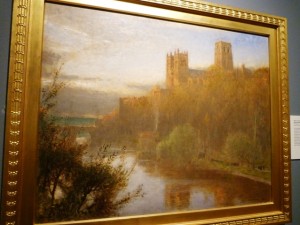 In his picture of Durham Cathedral at the top of the steep bank above the river, Albert Goodwin depicts the building emerging from a golden haze as mist rises from the river.

Goodwin was a dedicated follower of JMW Turner, admiring the way Turner created poetic evocations of scenes, transformed by sun and weather. 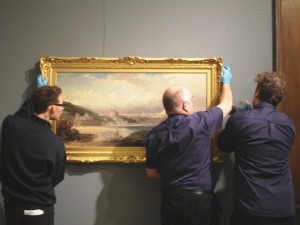 Scarborough on a bright sunny day features in this picture being carefully installed on the wall. However, those scudding clouds suggest the brisk breezes and bracing air for which the North Yorkshire coast is famous!

The wide golden sands made Scarborough a popular Yorkshire resort in the late-19th century, when this picture was painted. 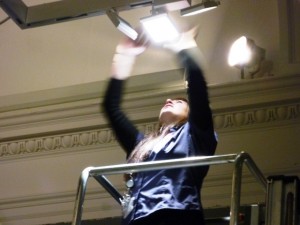 Once the paintings are up, the lighting needs to be set. It involves a good head for heights! You may have noticed an improvement in the lighting in our exhibition galleries – special grants for energy-saving LED lights in 2011 allowed us to replace the worn-out old lighting at last, so everything is as bright as it should be. 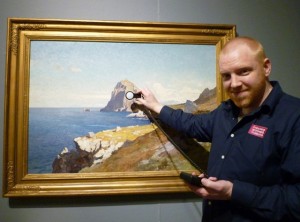 But before we finish the exhibition lighting, we need to make sure the levels are not too high for safety for the oil paintings. Garry is checking the levels for this picture with a lux meter.

There’re some lovely pictures in the exhibition, and we hope you’ll come along and enjoy the show. You can read more about the exhibition here.