With the Exhibition of Siege and Storm at Discovery Museum came a rather challenging conservation job. 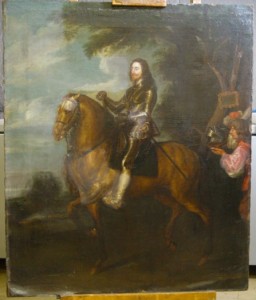 This is how the painting came into the studio. some areas had had varnish removed and the canvas had started to detach from the stretcher bars

Deep within the bowels of the Shipley Art Gallery a rather damaged painting of Charles the first was flagged up on our documentation system as a subject of possible interest for the coming exhibition.

At first when I looked at it my heart sank. It was in such a poor state I wasn’t sure if we had the time to get it treated in time. Still I like a challenge and this one was definitely a challenge.

The painting is of Charles the 1st and is a rather fine copy of a picture held in the National Portrait Gallery.  At first glance it appeared that it was painted on a very old canvas but this proved to be a lining which was covering the original 18th C canvas. The dimensions of the painting had been altered when the two canvases had been pasted together and the image had been extended both top and bottom. 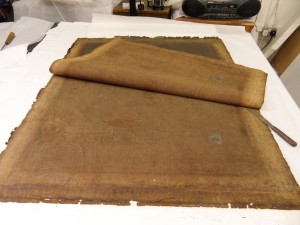 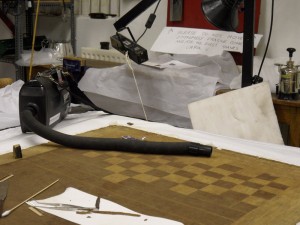 The old adhesive was removed from the back of the painting 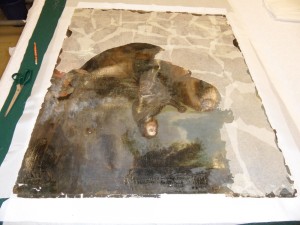 Whilst undergoing treatment to the back of the canvas a protective coating of paper was applied to the front. In this picture the coating is being removed after the back has been cleaned and the edges have been reinforced with new strips of material so the canvas can be attached securely to its stretcher again.

The facing  and the old discoloured vanish was then removed. The canvas distortions were treated and then all other structural problems such as holes and tears were repaired 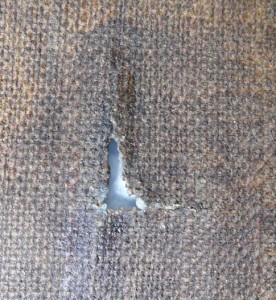 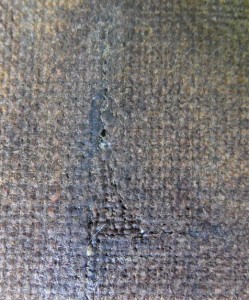 these were then reinforced with some gauze for strength 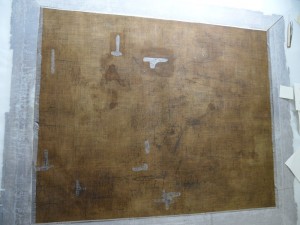 back of canvas with tear repairs 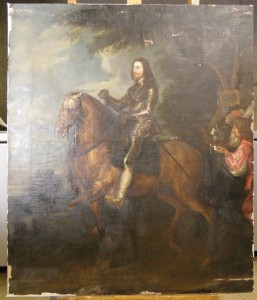 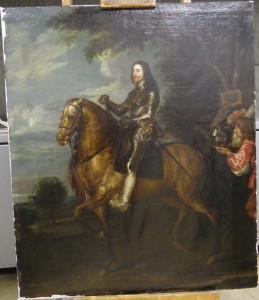 This is how the painting looked after treatment. the areas around the edges are coverd by the frame now

All off the losses were filled and retouched using reversible materials and a final varnish was applied. The varnish helps to saturate out the colours giving the darker colours more depth. it also helps to protect the surface from damage.

The painting is now part of the Siege and Storm exhibition and this will no doubt be displayed many times more now that he’s received a bit of love and attention. Long Live the King!