The beautiful stained glass windows mounted on the half landing of the grand staircase at South Shields Museum are a much-admired feature of our venue. 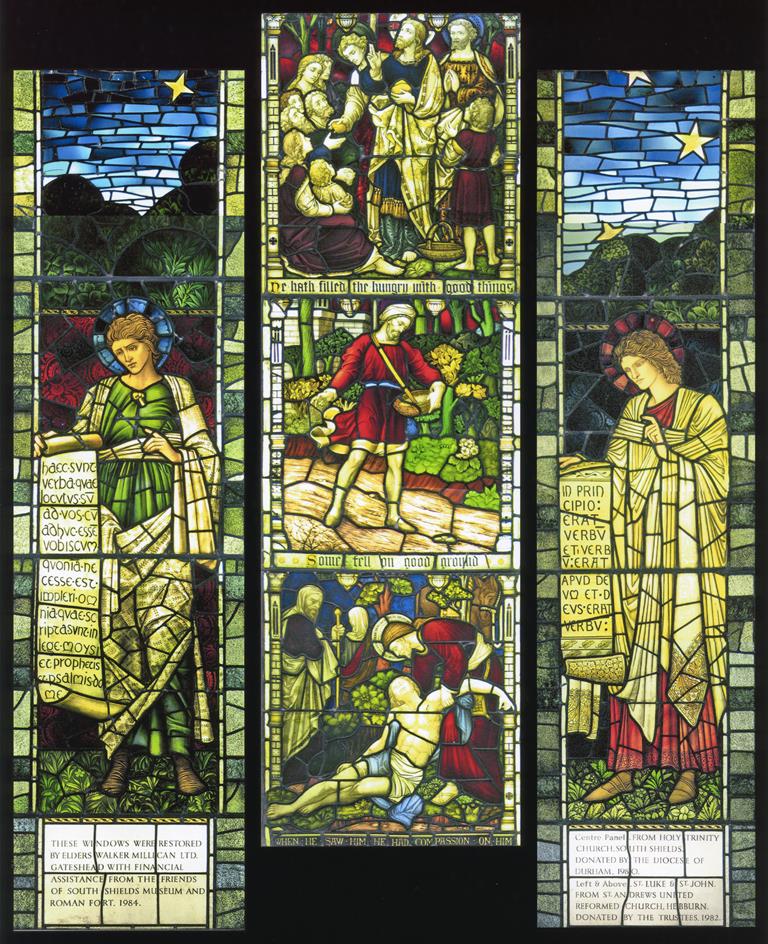 The centre window contains glass from Holy Trinity Church, South Shields, which was located at the junction of Laygate and Commercial Road. The top panel represents the miracle of giving sight to the blind, and the two below show the parables of the Sower and the Good Samaritan. They date from the early 20th century and were the work of Messrs. Clayton and Bell of London. 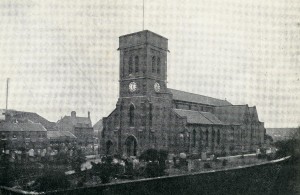 An exterior view of Holy Trinity Church, South Shields, about 1911.

The foundation stone of Holy Trinity Church was laid by the incumbent of St. Hilda’s Church, Rev. James Carr, on 22 May 1833. John Sumner, Bishop of Chester, who would go on to become Archbishop of Canterbury, performed the consecration on 18 September 1834.

The church, which was 94 ft. 8 in. in length and 41 ft. in breadth, was built to designs by the esteemed Durham-born architect Anthony Salvin, in the Early English style. There was seating for up to 1,200 people. 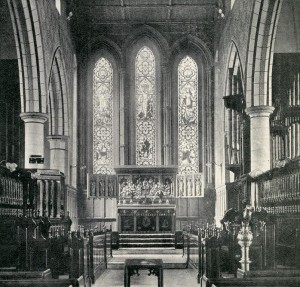 An interior view of Holy Trinity Church, South Shields, about 1911.

Services were suspended with effect from 25 May 1980 after surveys revealed the building to be structurally unsound, and demolition began on 1 November 1980. The footprint of the church was preserved within a garden area.

The church clock, a gift from South Shields Corporation, was started on 2 July 1883 by the vicar’s eldest child, who afterwards became the wife of the third vicar. One of the three clock faces was removed at the time of demolition, and is preserved in the museum collections. 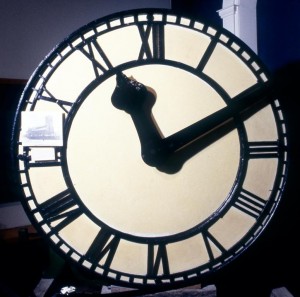 The windows at far left (St. Luke) and right (St. John) came from the west wall of the nave of St. Andrew’s United Reformed Church at Hebburn, formerly St. Andrew’s Presbyterian Church, and were erected in memory of shipbuilder Andrew Leslie Esq., J.P. of Coxlodge Hall, Gosforth, by his sister Mrs. Stephen.

Scotsman Andrew Leslie established his Hebburn shipbuilding yard at the age of 34 in 1853. Leslie encouraged his countrymen to move to Hebburn to work for him and by the 1860s Hebburn was dubbed “little Aberdeen”. As the Scots community of Hebburn grew, the need for a Presbyterian church was keenly felt. Andrew Leslie answered the call by funding the erection of St. Andrew’s Church in 1873, spending £9,000 so that it would have the highest steeple of any non-conformist church in the area, giving rise to the moniker the ‘Presbyterian Cathedral’. 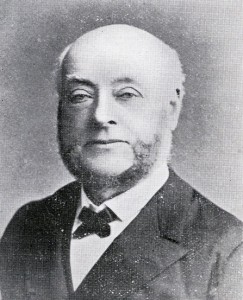 Produced at the studio of the acclaimed Pre-Raphaelite artist and designer Edward Burne-Jones, the St. Andrew’s windows, originally five in number, were in fact made for College Road Presbyterian Church, Newcastle upon Tyne, but were moved to Hebburn in 1933 following the conversion of their original home into the Electrical Engineering Laboratory of King’s College (now Newcastle University). 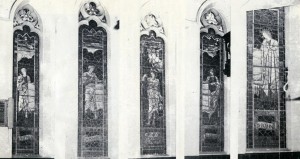 The original five Burne-Jones windows at St Andrew’s, Hebburn, pictured in the 1970s

St. Andrews Church was designed in the Decorated Gothic style by architect Mr. R.J. Johnson of Newcastle upon Tyne, featuring many elements of a church Andrew Leslie had admired on the continent. There was seating for 700 people. 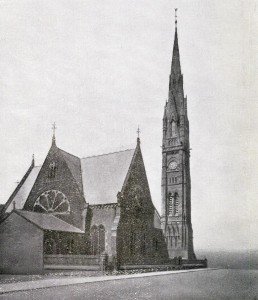 An exterior view of St Andrew’s Church, Hebburn, about 1923 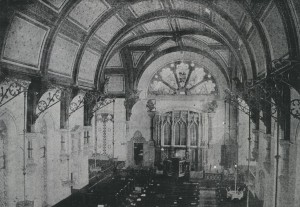 An interior view of St Andrew’s Church, Hebburn, about 1890

In the later 20th century the congregation dwindled and the church was last used in the run-up to Easter 1982, when worship was transferred to St. John’s, Hebburn. The empty building suffered at the hands of vandals and much damage was caused, including to the stained glass. The two windows displayed on the staircase at South Shields Museum were rescued by the museum in November 1982 before further damage could be inflicted. In 1985 the empty church was converted to provide workshop spaces, and is today home to a Buddhist meditation centre.