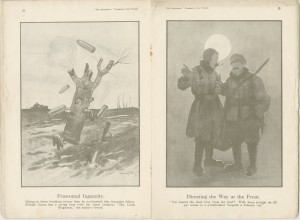 There was an exhibition of drawings by Bruce Bairnsfather at South Shields Museum in 1917-18 which was very popular, the drawings were humorous depictions of life at the front.

At the time of the First World War South Shields Museum and Art Gallery was used primarily as a Public Library with a museum and art gallery upstairs.

There were a lot of changes at the Library during the war.  The demand for books relating to the War and the various countries affected by the War was very high and a special bookcase was created to hold such items.  The use of the newsroom, where the daily newspapers were kept, increased and the reference department had a supply of ‘war maps’ which showed activity in France and Belgium.

All four of the male assistant staff members joined the army and were replaced by three female assistants; however the Chief Librarian got an exemption from the army.  All but one of the male staff members returned from the war.  Mr R.M.Daniel, who had worked at the library for 14 years and was called up on the first day of the war, was declared missing and then presumed dead in March 1918.