The cobbler, the banger and the pigeons. 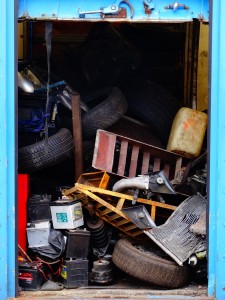 ‘The ear is indolent and dull’, used to say Theodor Adorno in his essays about music. You can’t prevent yourself from listening to sounds; listening is such a passive activity. Sometimes it’s so passive that you don’t even realise that you are listening to something. On the other hand, the eye is an organ of concentration. You decide to focus your vision somewhere, you close your eyes and open them again to direct your own version of reality. Maybe this is why society pays so little attention to listening. The question is: Is there anything worth listening to, anyway?

A world devoid of sound takes away a big part of our everyday experience. People associate sounds with their everyday routine, important events and memories.  Sounds are embedded in our culture, in the advances of technology and the quintessence of nature. Moreover, sounds -or more accurately soundscapes- change though time, exactly as landscapes do. Every day we lose sounds and new sounds take their place. Like the sound of the rag and bone men in the streets, the ‘click, clack, ding’ of the typewriter or the sounds of the Tyne in the early 20th century when you could not avoid but listen to the hammering of the riveters in the shipyards. If we don’t record these sounds, a part of our sound heritage will be cast into oblivion.

Today more and more people around the world have started recording their everyday soundscapes. Everyone can do it, either by using their smartphones or more advanced equipment like zoom recorders. This ever-growing database of contemporary sounds is expected to be a valuable asset for the future generations. Museums, libraries, archives and other cultural institutions, have also started building their own databases with sounds. The British Library sound archive is the most salient example.

In this context, I decided to do a sound project with Tyne and Wear Archives and Museums, around the sounds of Benwell. Benwell, in the West End of Newcastle, has had quite a turbulent history. Passing from an area of rapid industrial development to a de-industrialised era of deprivation, followed by the settlement of diverse communities in the area, and a rather unsuccessful series of regeneration efforts, Benwell is an area of great interest. Visiting this region today, you come across a unique mosaic of cultures. Chains stores, local corner shops, deli’s from all around the globe and a few very old stores most of which date back to the early 20th century, welcome you to Adelaide Terrace, a traditionally commercial road of Benwell. In the end of the road, one can find St. James Church, Centre for Heritage and Culture and graveyard; all three coexist in this 19th century church designed by John Dobson. St. James is where the heart of Benwell beats. 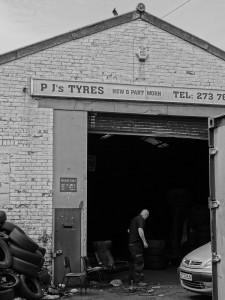 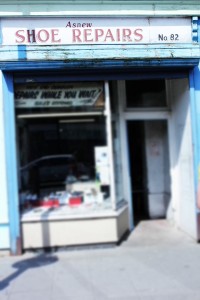 Having St. James Graveyard as my starting point, I searched for the most distinct sound features of the area. The recordings below are but the start of this on-going project that will get bigger and more inclusive as time passes. In its first phase it includes human, nature and mechanic sounds, sounds of the social history of the area (the shoe repair warehouse sounds), contemporary sounds (ASDA), sounds of silence (library) and noise (PJ’s Tyres). In the end you can find a sound map. Feel free to use the sound map to orchestrate your own walks in Benwell or other cities of the world. Every route is different when you pay attention to the sounds.

St. James graveyard is mostly known as the final resting place of Richard Grainger, builder and developer in Newcastle Upon Tyne. In the recording you can hear the sounds of the maintenance works and the wind blowing through the trees. It is possible that you can also listen to the maintenance works for the roof of the Centre for Heritage and Culture. 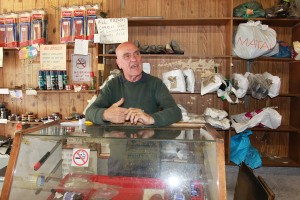 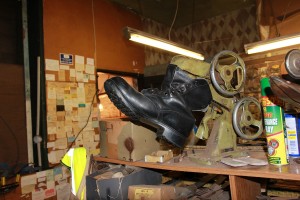 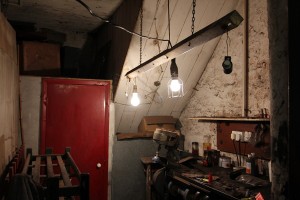 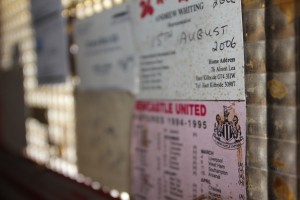 Lawrence Brien or as the locals call him Paddy the Cobbler, has a shoe repairs’ shop in Adelaide Terrace. His shop, which has been a repair shop business since the late 19th century, is simply fascinating. It has a collection of circus posters, sophisticated human-size machinery, countless tools, an almost-open ceiling and a pet spider. Paddy the cobbler, on the other hand, is a man with many stories. He learned the job from his father and still remembers when they used to tour the army camps in Catterick to collect the boots from every barrack and bring them back fixed the next day. Back in the 60s-70s the job of the cobbler was in great demand and only in Benwell there were six shoe repairers. Gradually, though, changes in society and the army lessened the demand for their services. The army got equipped with the American-style rubber boots, firemen stopped wearing chrome leather boots and people got used to affordable, disposable shoes that they would not care to get repaired. Nowadays, his profession is dying out, though, Lawence seems quite satisfied with the things he has achieved, he confesses to me while staring at the wall with the photographs of his five grandchildren.

The following recording features the sounds of him working on two pairs of shoes. He pulls off the bottom of the shoes, places a new one on top, cuts round the shape of it, and then he glues it. When the glue has dried, the cobbler pins the new bottom and sculpts it on the ‘finishing machine’. In the end, he varnishes the freshly trimmed bottom and the pair is ready.

Benwell accommodates a variety of ethnic minority communities. Wandering on the streets, it is very likely that you can hear people talking in many different languages, and music from around the world. In this recording you can listen to music from a house at Clare Street.

Supermarkets are awash in sounds. Beeps, crinkle noises, the freezers humming, squeaking trolley wheels, the clinks of the glass bottles, voices and of course the background music that normally, you barely even notice, compose the soundscape of most supermarkets. 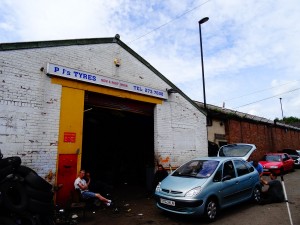 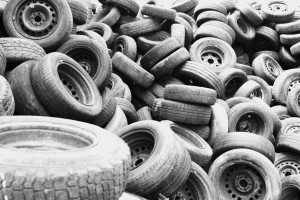 PJ’s Tyres is a mechanic shop and a tyre yard on the left side of Condercum Road, right after it crosses Adelaide Terrace.  The yard has been a mechanic shop for the past 14 years and previously it was a dairy. The sound samples record the air compressor machine, along with the sounds of the tyre inflator and the electric screwdriver and drill. 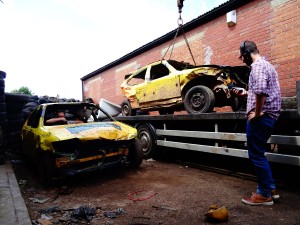 Almost hidden behind the piles of tyres in the P J’s yard, there was an old yellow Honda with a ‘PJ’s Tyres’ sticker on its smashed bonnet. The scrap car is reconstructed and prepared for the banger races by the owners of the yard, who willingly demonstrated the roaring sounds of the car’s engine. Behind the car, covered from hundreds of tyres was a white Porsche.

Silent spaces are very rare in urban settings. People associate silence and the sense of tranquillity it inspires mainly with parks. In some cases, with libraries as well. However, libraries rarely live up to their reputation, and the West End Library, in particular, is quite a noisy one. Steps, voices, page flipping sounds, the sounds of the photocopiers and the beeps from cashiers of the YHN housing services that share the same building, create an unexpected background noise that accompanies your readings. 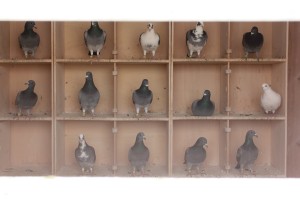 Pigeon races are a long tradition in the UK. In Newcastle, short distance races date back to 1877. Although generally regarded as the hobby of the working class, pigeon racing in Newcastle was popular among the middle-class as well. Today, there are still places in Tyne and Wear where you can find pigeon fanciers.  It is estimated that 43,000 people still practice pigeon racing in the UK.

Walking down the Adelaide Terrace in Benwell, you will probably notice flocks of pigeons making cycles around the allotments of the area. Inside the allotments you will find numerous pigeon crees and the club of the pigeon fanciers. 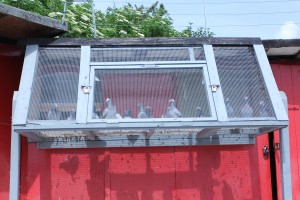 Finn really likes helping with his brother’s pigeons. In their quite spacious allotment they keep more than 200 pigeons, separated according to age, gender and breed. They never sell pigeons for money, instead they spend a lot in order to feed them properly and vaccinate them. In the recordings we did in their allotment, you can hear their pigeons cooing and eating their feed.

Pigeon Crees -The Trip back home 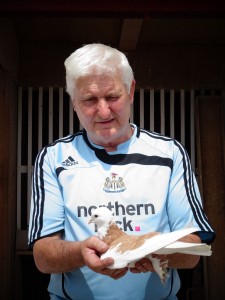 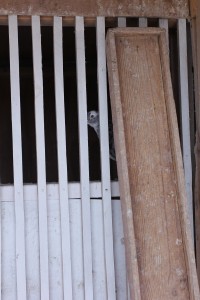 Pigeons are trained to return to their homes after each flight. Before every race, the trainers play a trick on them. Normally, males (cocks) and females (hens) are kept separately. Although, the day before the race they put them together ‘to excite the cocks’, as Finn explains to me. The next day they take the males to a long distance destination and free them in order to train them to return home. The males, believing that they will find the females back home, fly as fast as they can. Unfortunately, when they finally arrive, they find their cage empty, until the next race’s eve.

In the recording, Finn spots the pigeons that his brother freed in Shieldfield 20 minutes ago. He calls them back and frees a white female pigeon with one clipped wing (so it cannot fly), to attract them home. All pigeons return home.