Songs of the Sea – preparing a print for loan 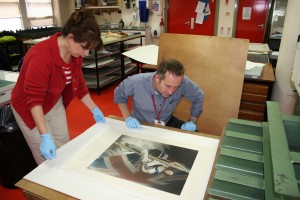 Christina and Matt with the print of Jack Crawford

Here’s a picture of two of our conservators, Christina and Matt, working on a print from the collection at South Shields Museum & Art Gallery. The print is now out on loan to the National Glass Centre in Sunderland. For more info about the exhibition see below.

South Shields curator Adam Bell explains why the print is significant. The print depicts the Sunderland sailor Jack Crawford (1775-1831) who was the hero of the battle of Camperdown of October 11th, 1797. Crawford was serving on the flagship HMS Venerable during the battle between the English and Dutch fleets. Despite heavy gunfire, he climbed the mast to nail the Admiral’s flag back into place after it had been shot away. The lowering of the flag (colours) was a signal of surrender. After more fighting, the British fleet eventually won. (The artist has mistakenly shown the Union Jack, not the Admiral’s flag. It is also the Union flag design from after 1801, well after Jack’s heroic achievement).

The inscription at the bottom of the print reads, “THE CHAMPION OF ENGLAND.//’The Challenge_’//’THE FOE THOUGHT HE’D STRUCK_BUT HE SUNG OUT AVAST!//AND THE COLOURS OF OLD ENGLAND HE NAIL’D TO THE MAST!’//From the original Picture in the Collection of J.L.Thackeray, Esqre, The Park Nottingham,//to whom this Engraving is respectfully dedicated by this obliged Servants. Shaw & Sons”

The exhibition ‘Songs of the Sea’ is at the National Glass Centre in Sunderland (21 July – 30 October 2011). The exhibition focuses on the sea as a metaphor for storytelling, exploring remarkable stories of personal experiences at sea.  So why not pop along to the exhibition and see Jack in action!?