Sing all about it!

“Gannin’ alang the Scotswood Road to see the Olympic Torch”

Now that the Queen’s Diamond Jubilee has passed we look next to welcoming the Olympic flame to the region as part of its tour around the country in the lead up to a summer of sport. A number of inspirational personalities and local heroes (but not Will.i.am) will be carrying the torch through places such as the Centre for Life’s Times Square on Scotswood Road. I have been given the challenge of celebrating this event by devising a series of activities to take place on the evening of the 15 June – the very day the Olympic flame comes to Newcastle.

Tyne & Wear Archives & Museums has a number of collections that could form the inspiration for such an event, including ancient Greek artifacts from the Great North Museum: Hancock; however, it seemed only fitting, given the proximity of the dates, to develop something that was linked to the anniversary of another historic sporting event- the Blaydon Races. 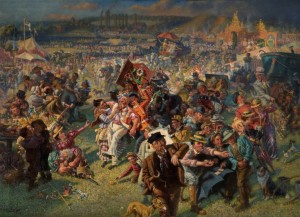 The Blaydon Races by William Irving, as seen at The Shipley Art Gallery, Gateshead

I’m not originally from the North East and was woefully ignorant of this important piece of the region’s history. My initial fact-finding mission took me to the Shipley Art Gallery, Gateshead, to see William Irving’s painting ‘The Blaydon Races’ in all its glory. Dating to 1903, Irving captured the spirit of the event that originally featured horse racing, bare knuckle boxing and acrobatics, not to mention stalls that sold ale and sweets. Hundreds of people would flock to the Blaydon Races each year, and Irving’s painting shows us some of the more well-known characters of the time, including Cushie Butterfield and The Swalwell Cat.

Many football fans will know at least a few verses to George ‘Geordie’ Ridley’s song, ‘The Blaydon Races’. It was originally performed at Balmbra’s Music Hall on 5 June 1862, forty-one years before Irving’s painting and it has since become an anthem of this region. Newcastle and Gateshead Music Services have organised a spectacular ‘Blaydon Bash’ music event at Newcastle City Hall on the 12 June to commemorate 150 years of The Blaydon Races. Of course it will feature Ridley’s song (amongst others), all performed by primary-aged children from the area. Since I can’t hold a tune to save my life, I’ve managed to rope in the help of children from St. George’s Primary and Westerhope Primary to sing at our event on the 15 June, which is very exciting!

I don’t want to give away too much of what we will be doing down at Times Square, but suffice to say that there is going to be lots more to this event- including a competition and goody giveaways. So, if you’re a fan of the Blaydon Races or keen to cheer on an Olympic torch-bearer, make sure you head down to there on the 15 June from 5.30pm until around 6.30pm. The Olympic flame will pass through at around 6.32pm so you will be in prime position to participate in something special!