Originally acting as a protector of the feet, the shoe has since developed into an expression of personal identity. The decoration and design of shoes has varied dramatically through time and from culture to culture. One of the most notable design features of the shoe is the elevated heel, which in western fashion has been used to enhance stature, status and sex appeal.

In Europe from the 16th and 17th centuries, chopines stand out as the most extravagant examples of early elevated shoes. The Venetians made the chopine into a status symbol revealing wealth and social standing for women. Tourists to Venice often remarked on the outrageously high chopines, claiming that they were “invented by husbands who hoped the cumbersome movement that entailed would make illicit liaisons difficult” (McDowell 1989). Not only were these types of shoe aesthetically pleasing but they also considerably reduced movement, much like the lotus shoes of China. 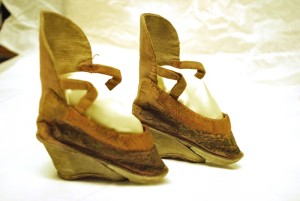 Heels were an indicator of wealth and status for both men and women throughout Europe in the 17th and 18th centuries. In France, wearing heels even became a regulated expression of political privilege. In the court of King Louis XIV (reign 1643-1715) only those granted access to his court were allowed to wear red coloured heels and no heels were allowed to be higher than his own! 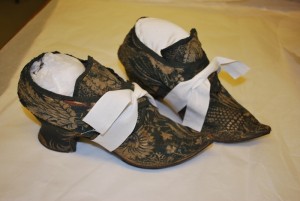 Female shoe with 'Louis' style heel of the time.

For almost forty years, heels were nowhere to be seen in fashionable Western footwear. With the increase of wide paved boulevards in cities such as Paris and New York, a new age of promenading, café culture, and window shopping developed in the mid 1800’s. As wealthy women indulged in these new pastimes, fashionable footwear became sturdier. The high heel reappeared and was now seen as a distinctly feminine form of footwear.

By the turn of the 20th century, the social and political opportunities for women increased dramatically and women began to participate in what had previously been considered masculine privileges. They did so wearing heels. As clear signifiers of female gender, high heels helped to counter arguments that new freedoms could only be gained at the loss of femininity 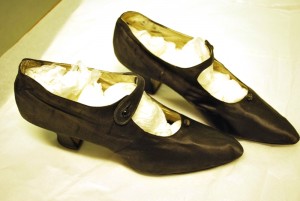 Despite the deprivations of a wartime economy, high heels were very fashionable in the 1940s. Using materials that were not rationed, such as wood straw, and snakeskin, shoemakers were able to create shoes that were literally and metaphorically uplifting during the darker years of the forties. 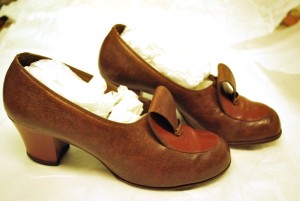 Once World War II ended, the platform quickly went out of style. As men reclaimed their civilian jobs, a renewed emphasis on domesticity encouraged women to return to the house and homemaking. Fashion stressed femininity and the vogue for the stiletto enhanced the stylish hourglass figure by repositioning the stance of the body causing the chest and hips to jut out. The iconic stiletto, with its high needle-like heel, pointy toe and elegant contour, has remained a fashion staple for over half a century. 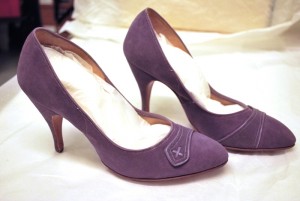 The youth of the 1970s continued to explore the new opportunities opened up by 1960s counter culture. The challenges to proscribed modes of gender ushered in a fashion for androgyny and unisex style. For the first time since the aristocratic age, men wore elevating shoes. Male rock stars popularized the fashion by wearing extremely high platforms and their fans soon followed in these footsteps! 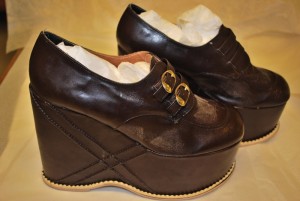 Today, the catwalks are over flowing with high heels. Celebrated shoe designers such as Manolo Blahnik, Jimmy Choo and Christian Louboutin conjure images of luxury, style and lavishness. After five hundred years and an ever increasing shoe obsessed society, it’s safe to say high heels act as an enduring expression of personal style, identity and individuality and will probably continue to do so!