While the cheek-piece from Wallsend itself is made of iron, all the other cheek-pieces on display in the Saving Face exhibition at Segedunum are made of copper alloy and originally would have been gold in colour. Many of them, however, still have large areas of tin-coating surviving which would have made them look silver. Either way, when in use the helmets would have shone brightly in the sun – there was no attempt at camouflage in the Roman army! A late Roman author called Vegetius said that one of the duties of centurions and decurions was to make sure that their soldiers were ‘well-clothed and shod and that the arms of all are scoured as well as glittering’. He goes on to explain why: ‘the brilliance of arms strikes very great dread in the enemy. Who can believe a soldier warlike when his inattention has fouled his armour with rust and mildrew’ (Epitome of Military Science, translation by N. Milner). 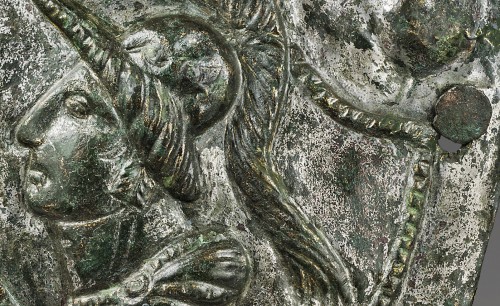 Detail from a cheek-piece showing the remains of the original tin coating. Note the original brass colour showing through in places on the helmet and plume, and the copper colour of the circular rivet.

Soldiers must have spent a fair bit of their time involved in spit and polish. They had quite a bit of metal on them when fully armoured, all of which needed to be kept ‘glittering’: helmet, armour, sword, dagger, shield boss, scabbard fittings, baldric fittings, and belt fittings.

Ancient authors give some hints of what they might have used. The most common method of cleaning metal was by scouring, in other words rubbing it with an abrasive such as sand, ashes, alum, or fine earths like gypsum; the finer the powder the better the finish, although the Leiden Papyrus suggests a gentler method of cleaning using the water of boiled beets. After cleaning, some polishing was required: the author Isidore says that goat-hair cloth was used by soldiers on their armour (Etymologies, 18.13.2). When eventually polished to a shine the metals may have been given a coating of olive oil or fat to protect it, at least for a while. Pliny (Natural Histories, 31.33.66, 34.43.150) notes that iron could be cleaned using sea water, and then protected from rust by lead acetate, gypsum or liquid vegetable pitch – although he does also add: ‘it is indeed said that the same result may also be produced by a religious ceremony’. No doubt generations of soldiers wished it could be so easy.

One Response to Shiny shiny – by Alex Croom, Keeper of Archaeology