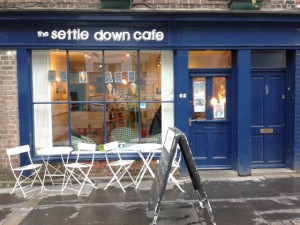 The cafe entrance...always a warm welcome

We’ve installed one of our exhibitions at The Settle Down Cafe in Newcastle. It’s called, “Out of One Eye: the photography of Jimmy Forsyth”

Why not pop along and have a look…? Let me know what you think.

Jimmy Forsyth came to Newcastle from Barry, South Wales, in 1943.  He had come to work at ICI in Prudhoe as part of the war effort.  He had been at work for only four days when an accident led to the loss of sight in his right eye.

When the war ended and servicemen returned to their old jobs, Jimmy found it increasingly difficult to find work.  He settled in Elswick and spent his days walking and reading about the history of his adoptive home.

In 1954 he bought a camera from a junk shop and began taking pictures along Scotswood Road. At first they were just snapshots – people he knew, places that interested him. Eventually he decided to try to make a comprehensive record of where he lived – he wanted to document the people who lived and worked there and the buildings and the streets that were being knocked down during T. Dan Smith’s redevelopment of the west end of the city.

Widespread recognition of his photographs did not come until 1981, when he was discovered by Newcastle’s Side Gallery, which mounted major exhibitions of his work.  In 1987 he was awarded the prestigious Halina Award for photography. 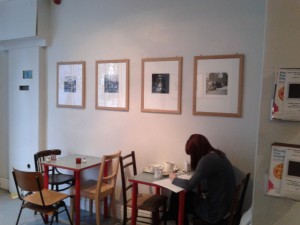 Some of the images in situ 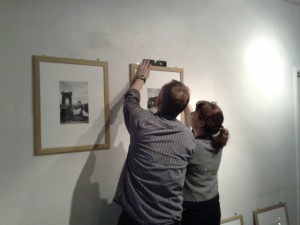 Christina and Matt install the photographs 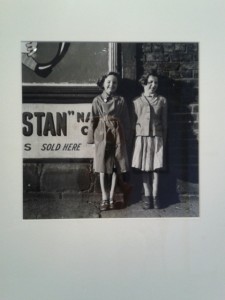 One of the images you can see in the exhibition

One Response to Settle Down Cafe hosts Archives Exhibition