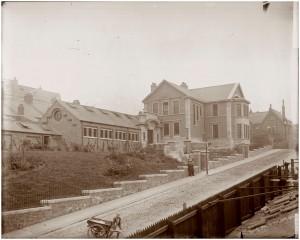 Swan Hunters staff institute as seen from the bottom of Swans Bank, around 1914

The site of Segedunum Roman Fort, Baths & Museum was completely covered with buildings and streets during the First World War however academics did know of the existence of the fort and emergency archaeology had been carried out.  The building that is now used as offices for museum staff was erected in 1914 as a staff institute for Swan Hunters workers.  It contained a dining room, kitchen, stores, gymnasium, library, billiard table and a rest room. When a roll of honour was produced in October 1915 to honour the men from Swan Hunters who had given their lives in the War it was placed in the staff institute.  The site of the current shop and café was occupied by a shooting range.

2 Responses to Segedunum Roman Fort during the First World War