Hello! This is my last blog post to accompany the exhibition ‘Seaside Shields’, held at South Shields Museum and Art Gallery until October 31st. I have previously explored postcards and photographs of the Beaches, Parks, Fair and Piers; now it is time to consider what the summer tourist would do in the town, and how they would get around. 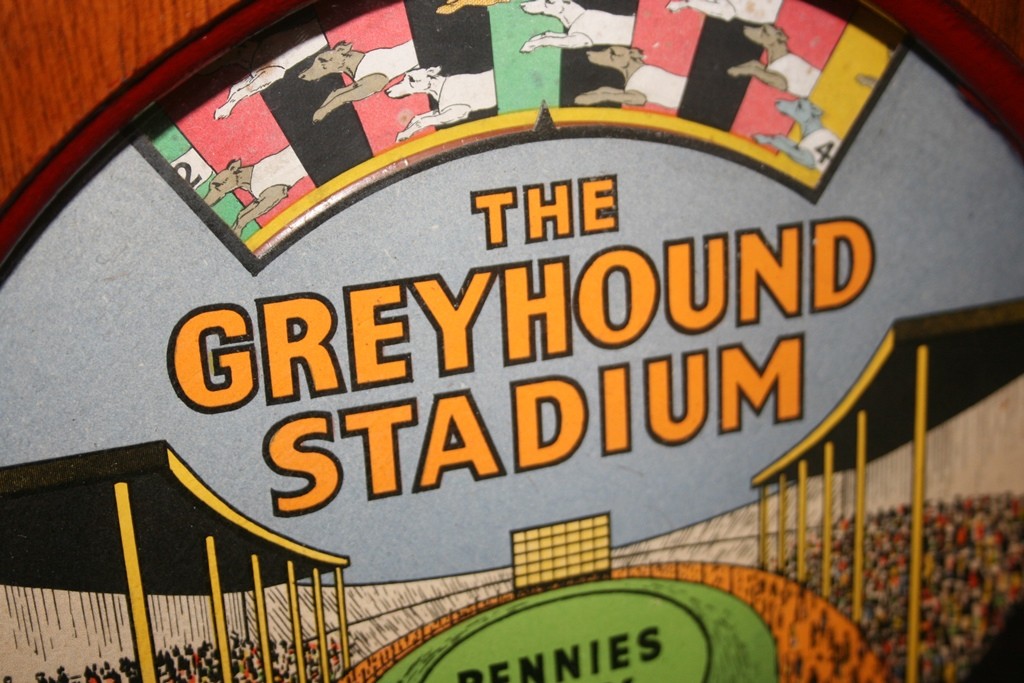 A visit to South Shields seaside was often accompanied by a venture into the town centre, only a five minute stroll inland from the parks. Both Ocean Road and King Street provided plentiful shops for browsing, if one was tired of the sands. From here, visitors could walk up Fowler Street to look at the new Town Hall, and continue on to Westoe Village for the picturesque views and the quiet residential walk. Transport links around the town and the local area included a train service (later the Metro), Ferry, Buses and trams, allowing tourists both an easy way to reach South Shields and plenty opportunities to visit nearby sites of interest. 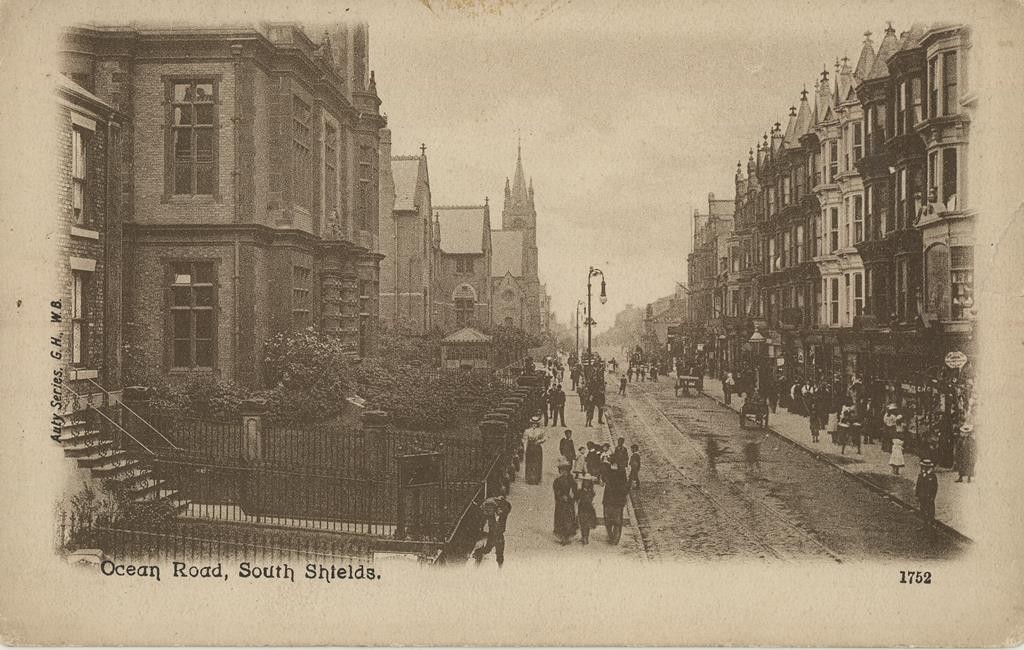 South Shields was a recorded shopping hub from early in the nineteenth century. The industrial revolution had required workers to extract coal from the nearby mines, which then in turn increased the population dramatically from around 12,000 in 1801 to 75,000 in the 1860’s. Shops, schools, and entertainment facilities then began to increase along this stretch of road to cater to the growing population and tourists alike. Before the start of World War One, there was approximately one hundred butchers, a dozen tailors and bike shops a piece, nineteen fishmongers, seventy shoe shops and two musical instrument dealers located in South Shields. The most recognisable shops, Binns, Marks and Spencers, and Geordie Jeans, were all situated on King Street. In the below 1941 photograph, the train bridge in the background is draped in an advertisement for Binns. With all these shops, tourists could make use of a day visit to the beach by also shopping for goods. 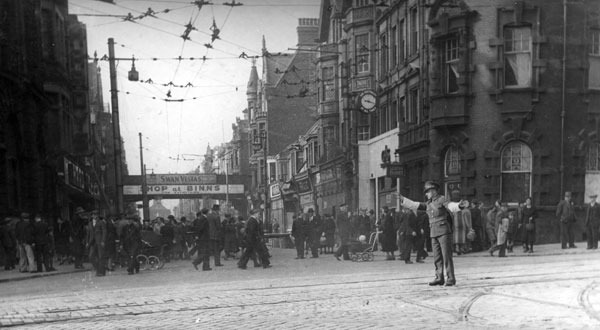 South Shields also had several theatres and cinemas to attract tourists, all of which have been subsequently destroyed or converted into shops or bars. One of the cinemas in town was situated on Mile End Road (now Viva bar), after conversion from assembly rooms in 1938. It was first named The Scala, then The Gaumont, before becoming the Focus. This closed in 1982. Over the road to the Focus was the Queens Theatre (now located where Mile End car park is). It opened on the August Bank holiday in 1913, attracting huge crowds to see the Les Georgis acrobatic group, Miss Aimee Parkinson the contralto singer, and the film East Lynne. The theatre itself was destroyed by bombing during WW2, however throughout its short existence it was hugely popular with tourists and locals alike. Now, the cinema/theatre for South Shields is the Customs House, situated on the Mill Dam near the Ferry dock. A commercial cinema chain is also making plans to develop around this area in the future. 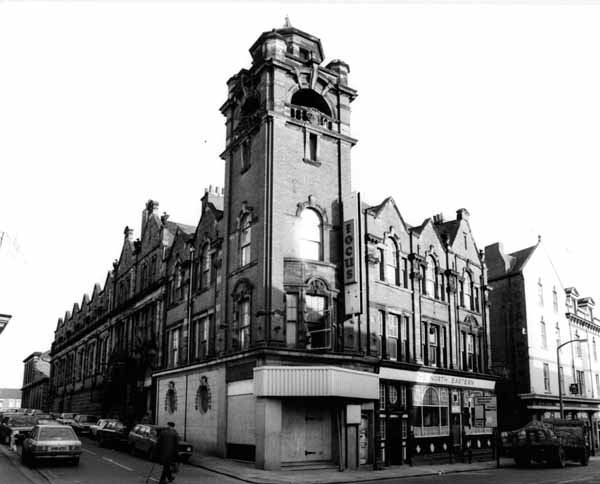 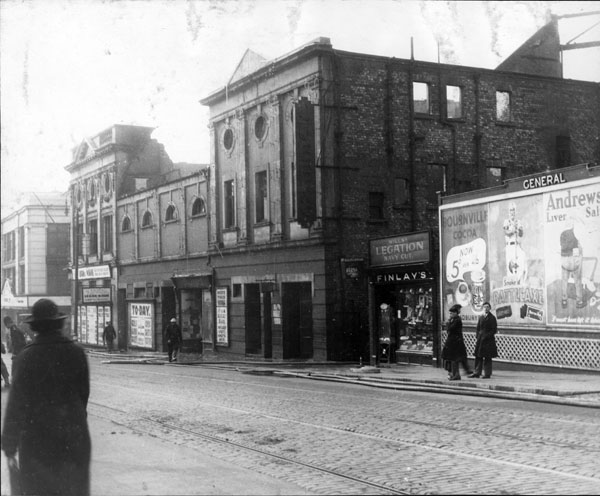 Gradually it became necessary to pedestrianize the main shopping street for safety reasons, as seen in the below photograph. As I was born in 1994, this is the King Street I recognise from my childhood. There is significantly less Greggs shops, which have spread down the street like a rash, and many of the big names have now closed down or moved premises.  Most recently (and sadly), Marks and Spencers closed down for good, having had a permanent shop in South Shields from 1907. Modern day tourists often visit Ocean Road for the huge number of excellent Indian restaurants, and Colmans Fish and Chip shop. The Ocean Road premise opened in 1926, and has been a staple to the South Shields tourist industry ever since, winning various awards. 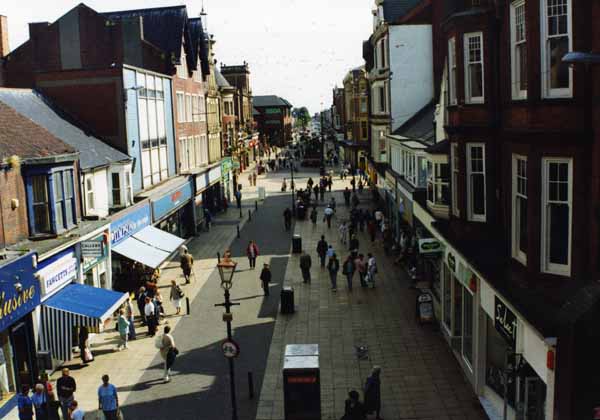 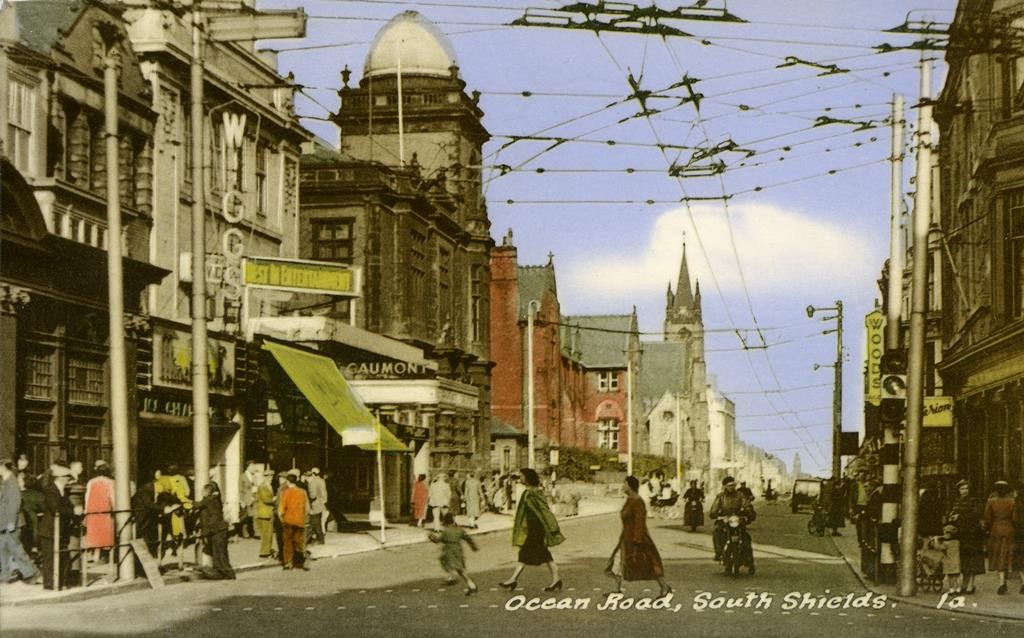 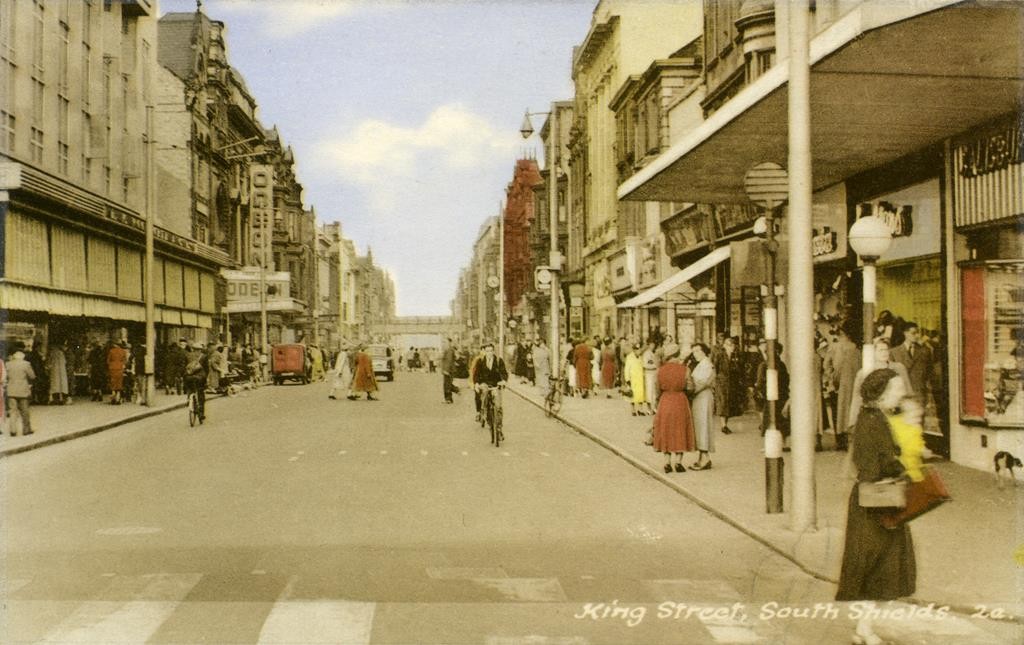 TWCMS : 2009.2375. Postcard from the collections at South Shields Museum and Art Gallery. View of King Street from the Market/Old Town Hall end. 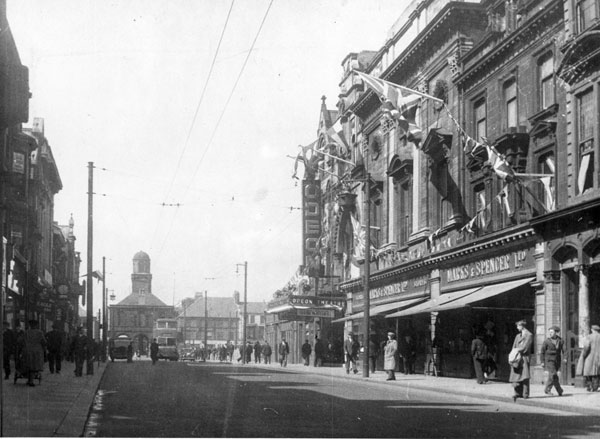 STH0000507. Image from South Tyneside Images/Amy Ceila Flagg. 1940’s: Marks and Sparks on the corner, with the old town hall in the background.

The town is also home to two civic halls. The first, built in 1768, can be found surrounded by the market place at the far end of King Street. It has an open plan lower half, which can be entered through several arches. This was used by market stall holders to protect their goods from the weather, while one corner hosts the cell for the manorial court. The upper floor was home to the Dean of Durham up to 1855, when he sold it to the town corporation, who then shared the building with market organisers. It survived a bomb attack in 1941 unscathed, despite the area surrounding it taking a good hit. It is now a Grade I listed building, and despite a facelift in 1977 it is only used for an occasional meeting. One of the photographs I have found shows a helter skelter in front of the old town hall – presumably part of the market or of a seasonal event. 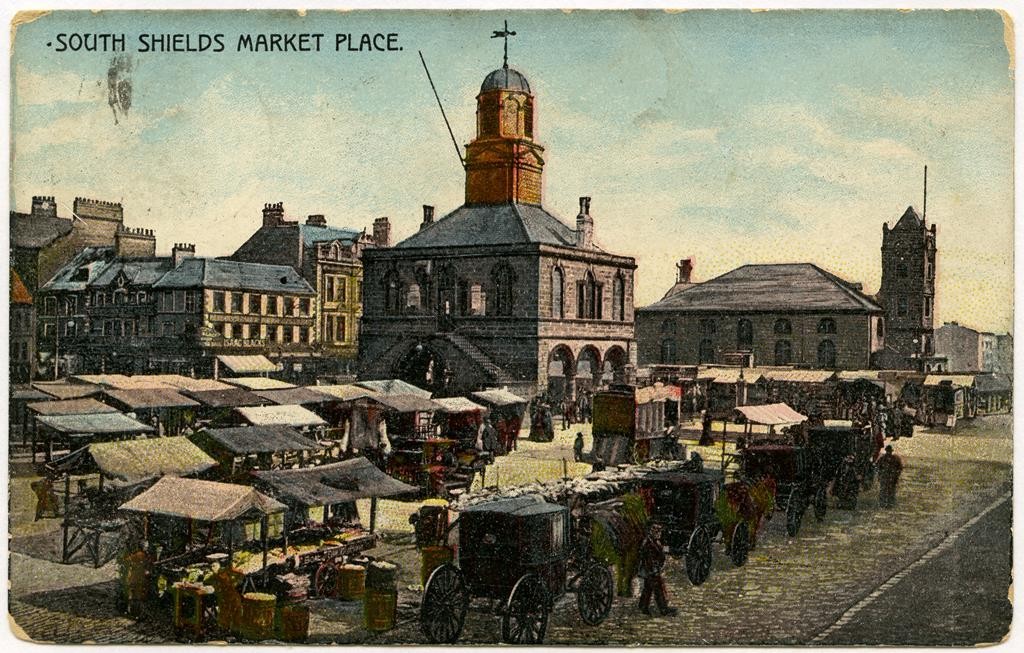 TWCMS : K4566. Postcard from the collections at South Shields Museum and Art Gallery. Market place at the end of King Street; Old town hall in the middle. 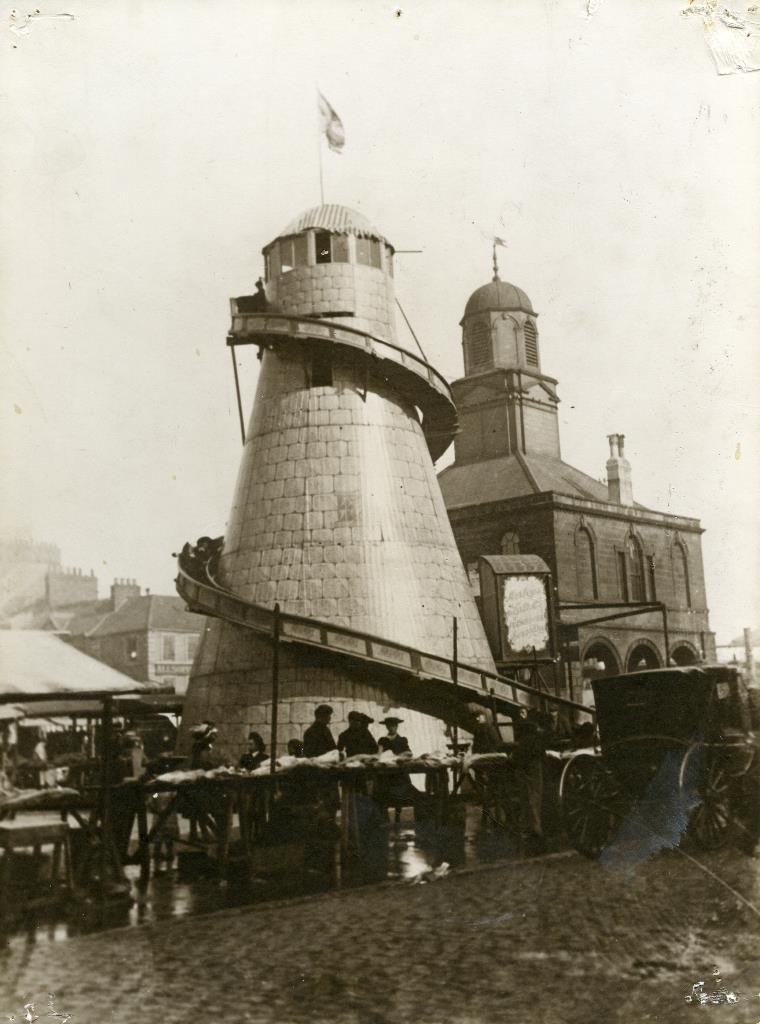 TWCMS : 2002 : 995. Postcard from the collections at South Shields Museum and Art Gallery. A ride outside the old town hall in the market place. 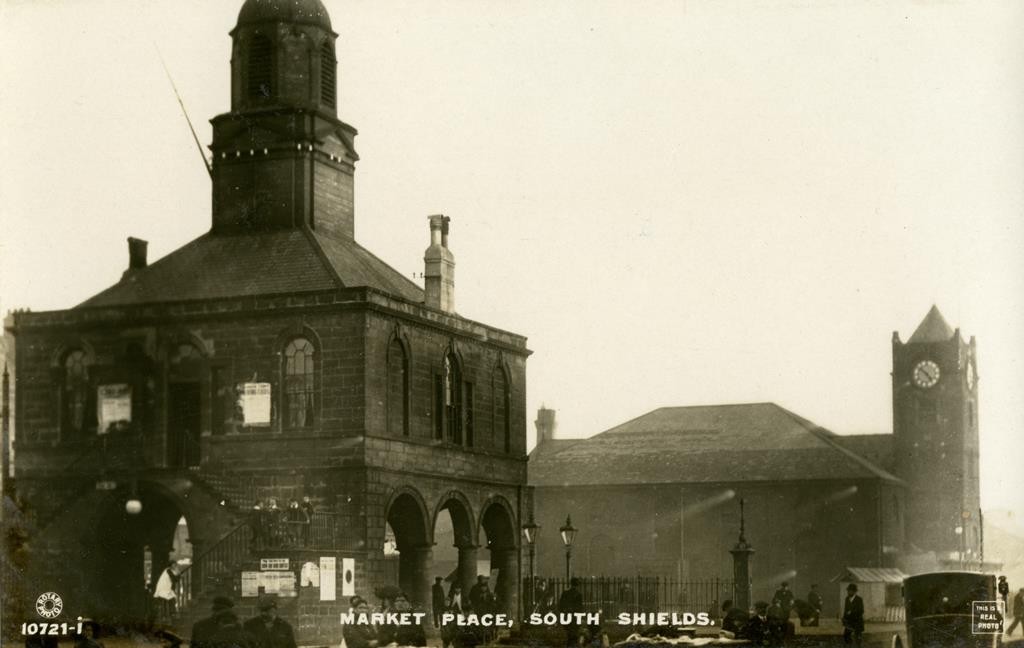 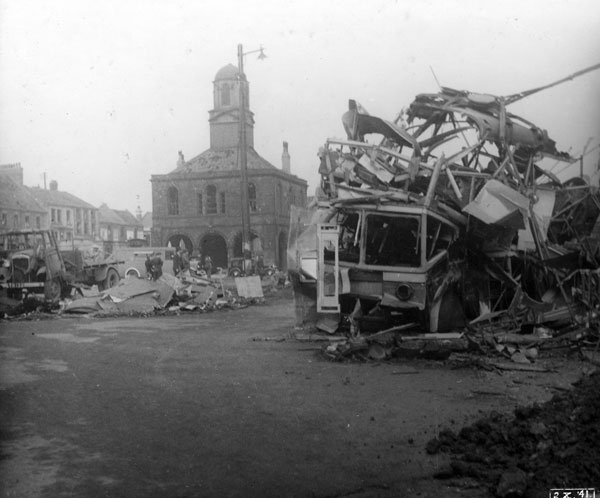 The ‘new’ town hall (or rather, the more recently built town hall), was designed by architect Ernest Fetch in 1902 and was completed in 1910. There was a need for more space to hold the various divisions of the town council, and unfortunately the old town hall was inadequate at doing so. The grand architecture meant that it was often a stop off point for visitors, or a photograph often featured on the front of postcards. In 1913, a statue of Queen Victoria was added to the exterior, which is now listed as Grade II. On the clock tower, there are four figures circling the outside representing each season, while the weathervane is a representation of an Elizabethan galleon ship. The Town Hall was, and remains, remarkably grand in appearance. 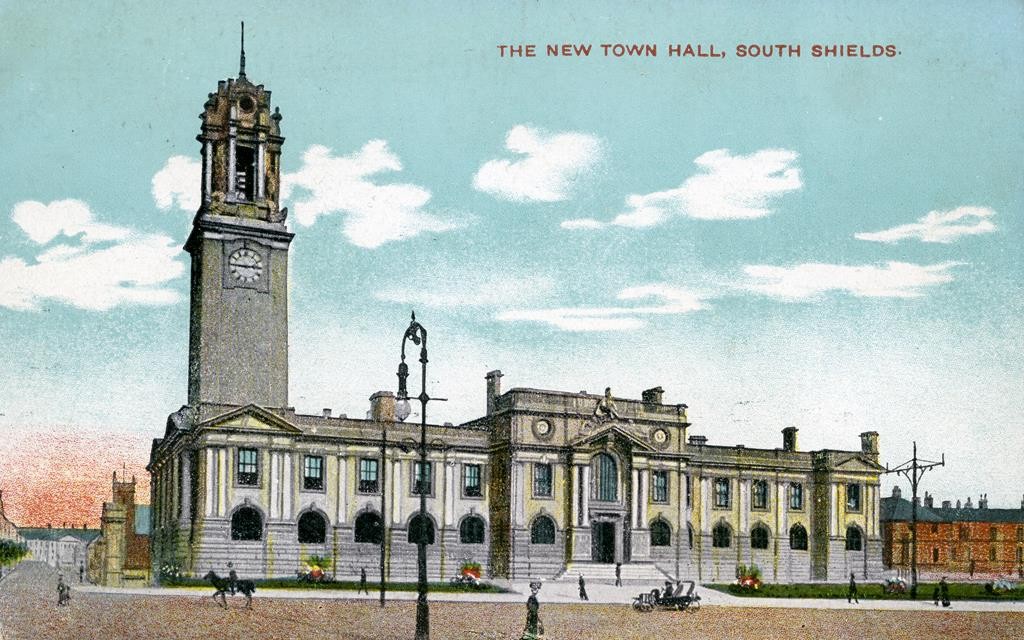 TWCMS : 2011.1903. Postcard from the collections at South Shields Museum and Art Gallery. 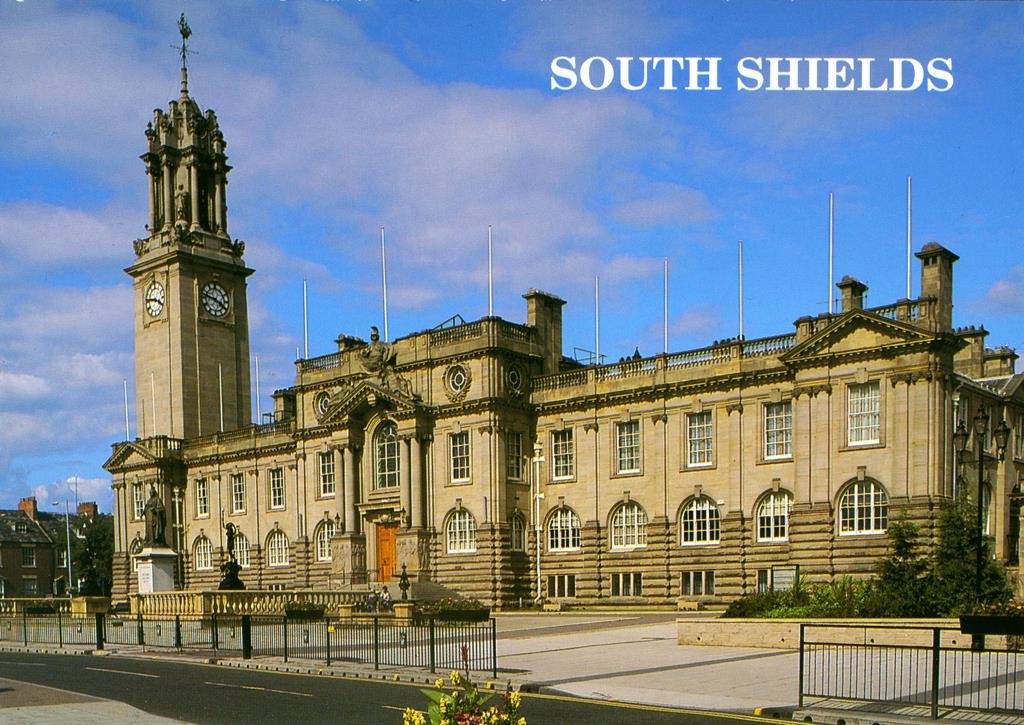 TWCMS : 2007.237. Postcard from the collections at South Shields Museum and Art Gallery. Modern view of the town hall. 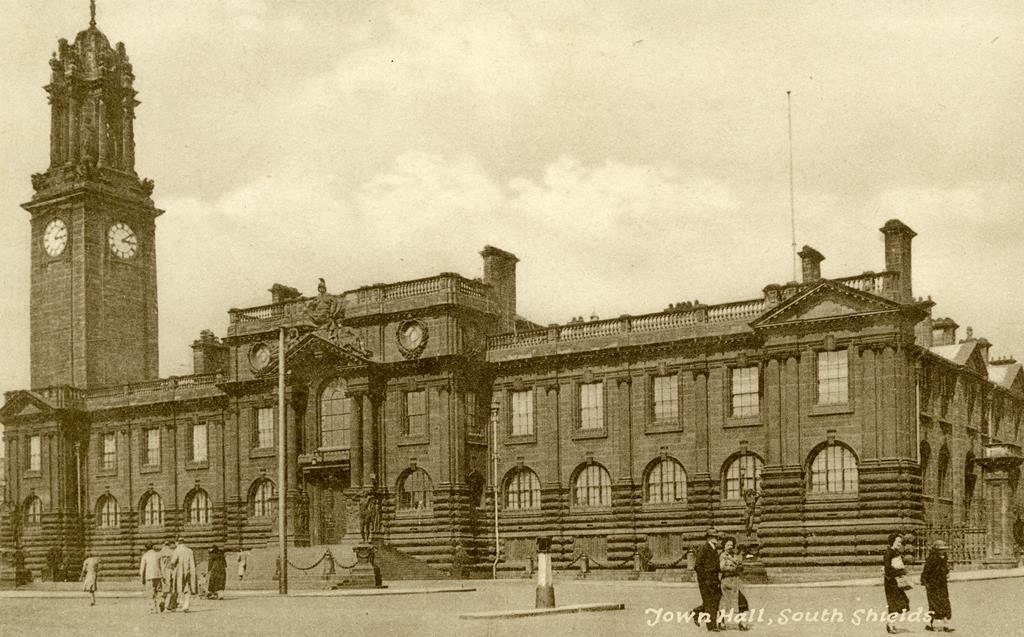 TWCMS : 1998.116.19. Postcard from the collections at South Shields Museum and Art Gallery. 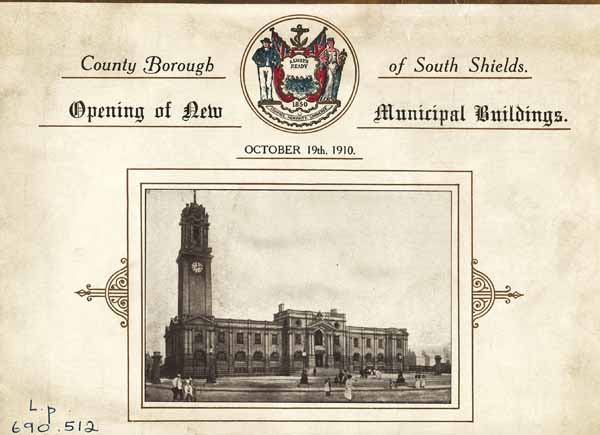 Further into town is the residential area of Westoe Village. Several postcards show the quiet and serene nature of the homes, which are generally Georgian and Victorian builds. These homes provided the wealthy merchant owners of the coal and ship building industries a home away from the smog of the industry on the Tyne. The passageway between the village and the Westoe Pub is known as ‘Salter’s Trod’, which refers to the horse-drawn carriages that would carry sea salt inland for preserving fish. Personally, I’ve always thought this passage has an enclosed, damp feel to it, so I can’t imagine this was a walkway for the general public. However, the village features upon postcards, most likely as a way of marketing the town’s best side. The fair held here every summer tends to be quite fun, allowing the residents to put on stalls in the streets selling homemade wares. It rains almost every year. 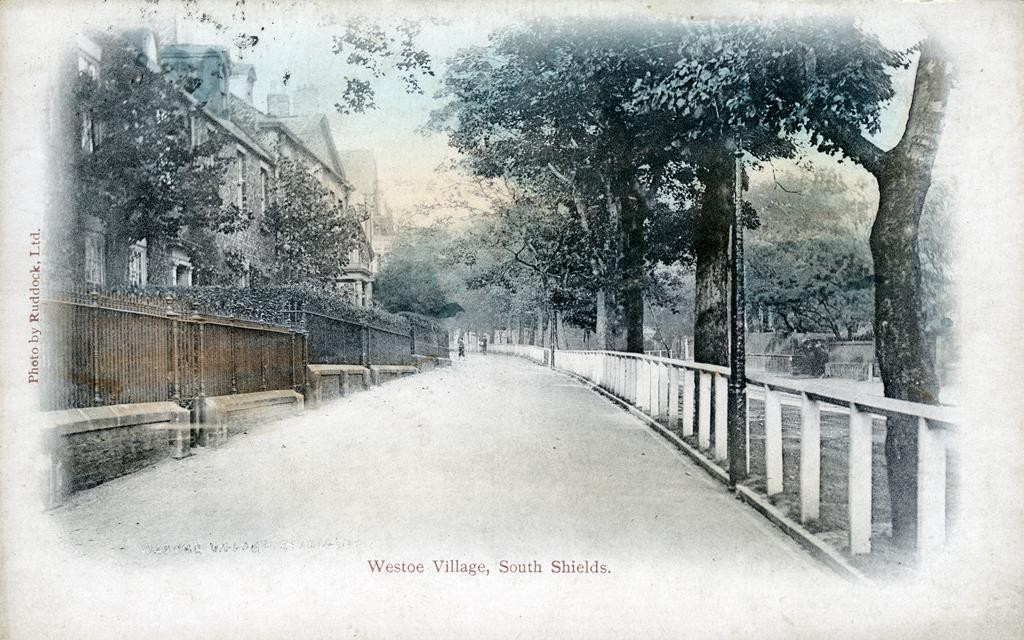 TWCMS : 2002.822. Postcard from the collections at South Shields Museum and Art Gallery. The left side of Westoe Village. 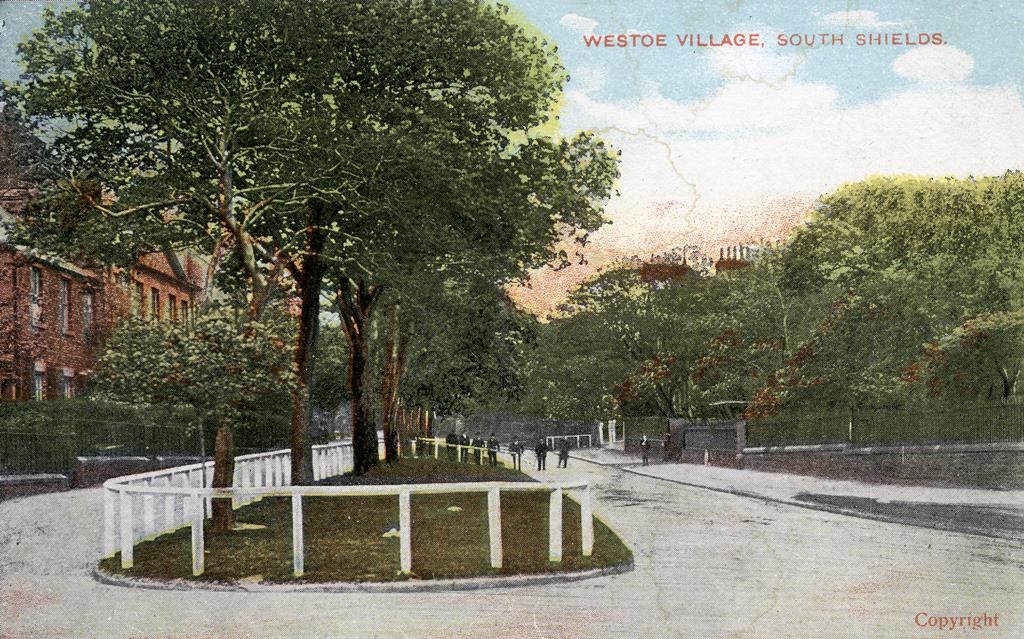 TWCMS : 2002.821. Postcard from the collections at South Shields Museum and Art Gallery. View of left and main pathways in Westoe Village. 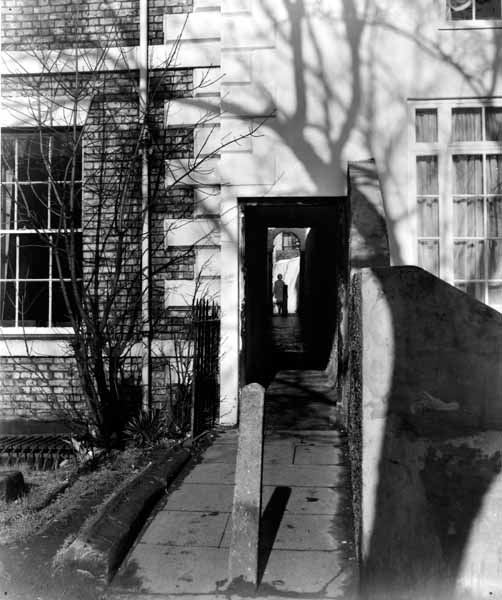 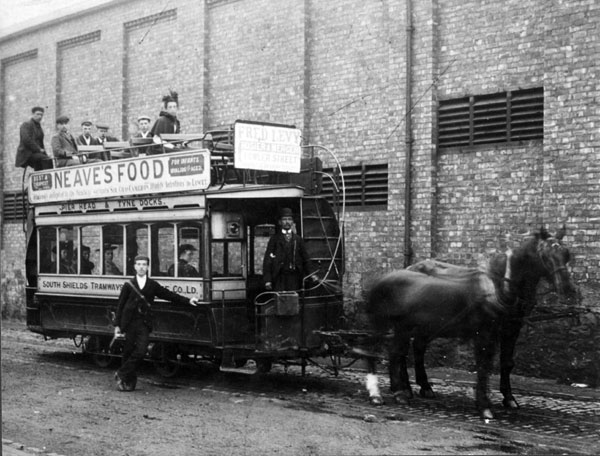 A seaside visit to South Shields would have been nearly impossible without the development of good transport links, beginning in the nineteenth century and under continuous development to this day. In 1881, horse pulled tramways were approved to be built throughout main streets in South Shields; fares were controlled at 3d for an inside journey, and 2d for a seat on the roof. The above photo shows the layout of the carts. After a few dodgy years of funding and ownership, in 1887 the service became much more honed: it ran every 15 minutes, with a horse changed every hour and an extra horse used to get up Station Road bank. In 1906 this was replaced by an electric tramway, from Fowler Street to Stanhope road, via Westoe Village. This was quickly followed by more lines until the First World War prevented an overuse of fuel and power. Trolleybuses and Motor buses began to become viable options for South Shields transport, and the electric tramways (now needing huge reinvestment and expansion) was terminated in 1946. Instead, there were 59 trolleybuses and 41 motor buses employed through the fifties to allow good transport around South Shields. Finally, the trolleybus system close in 1964, and the Metro system opened in 1983-4. The transport in South Shields shows a trend in adapting to circumstance – the need for expansion due to more housing and increasing need to reach further destinations needed more reliable services, while the increase in car ownership required transport to rival the speed and convenience of the motor car. 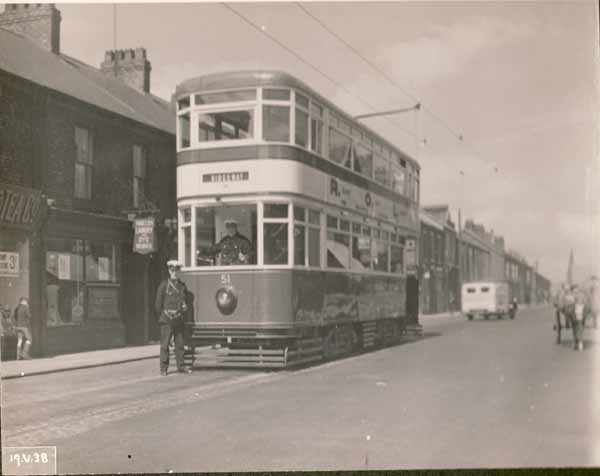 In 1816, the first steam ferry began to operate between North and South Shields; however it was in 1828 that the ferry service took a commercial form, of that we recognise today. The North Shields Ferry company began with three boats: the Baron Newcastle, the Durham, and the Northumberland. Several more companies began to market trips, until 1863 when the Tyne Improvement Committee bought out the several companies to consolidate services under one establishment.  By 1929, there were 11 ferry routes, going as far up the Tyne as Newburn. The establishment of the Tyne Tunnel caused the ferry business financial damage in the 1960s, meaning when the Market Place ferry was bought by Nexus (PTE) in 1972 it became the only remaining ferry service. The below vessel is named the Shieldsman, which remained in use from 1976 until 2009. The two ferry vessels remaining now, The Pride of the Tyne and The Spirit of the Tyne, continue to make 25,000 journeys a year. 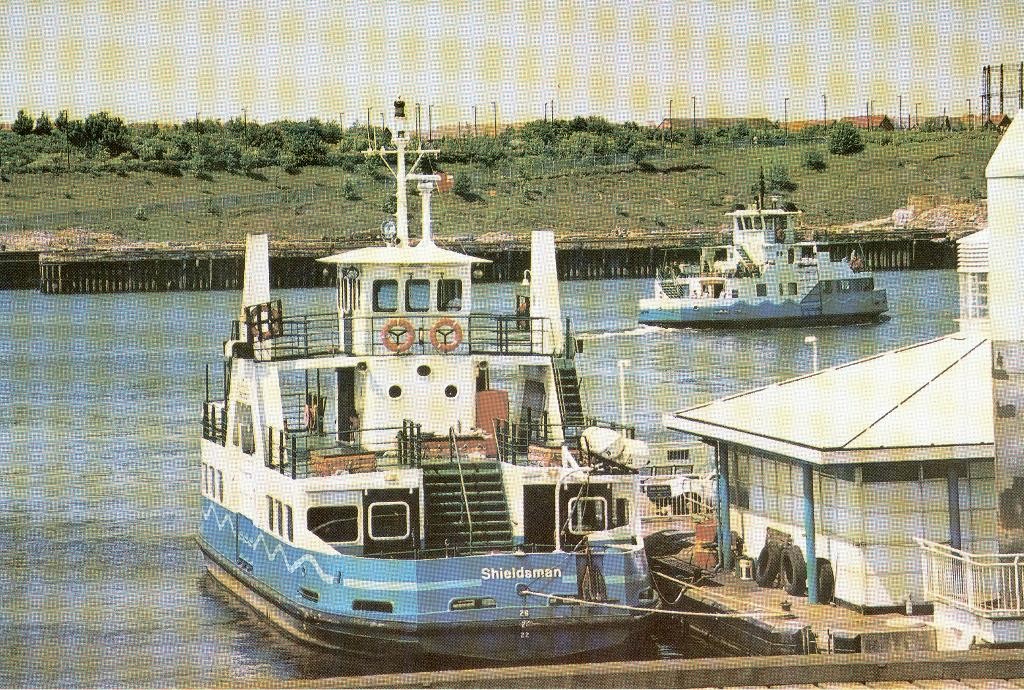 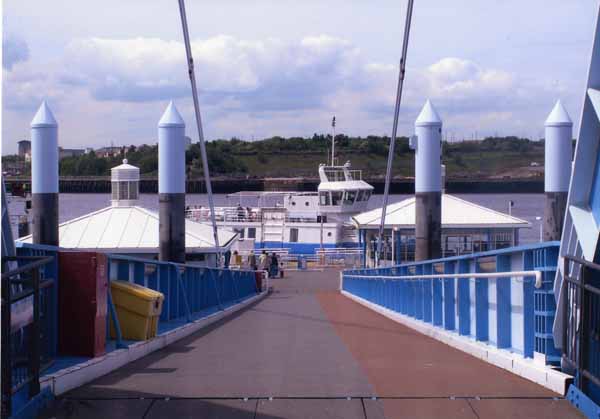 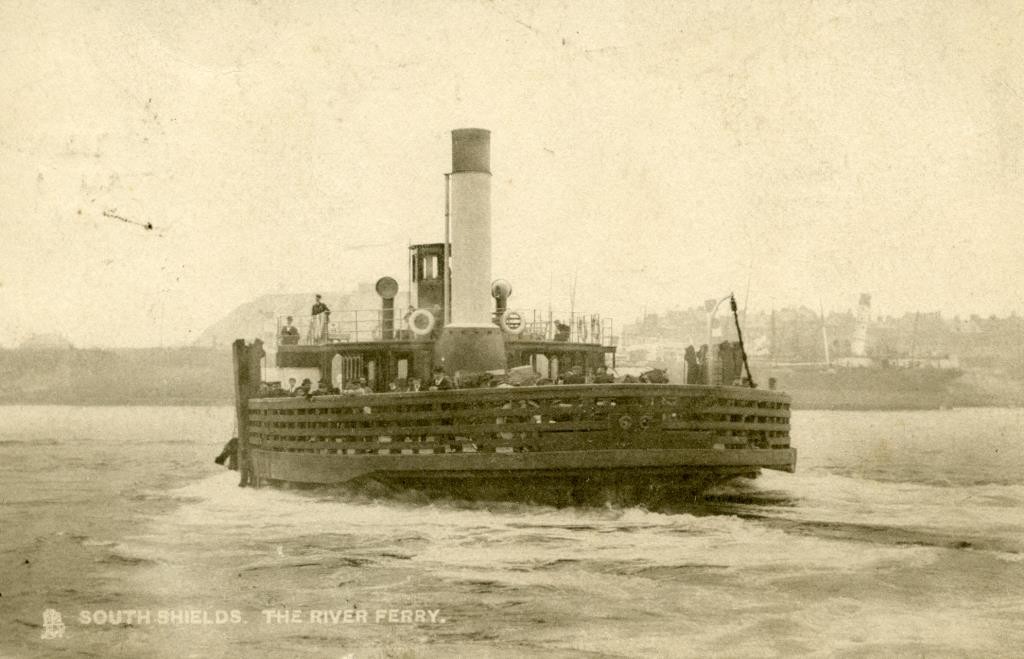 TWCMS : 2002.888. Postcard from the collections at South Shields Museum and Art Gallery. Unsure of the precise name of this particular ship.

Thanks for reading! Please leave any comments below – I’d love to hear your own seaside South Shields stories.

4 Responses to Seaside Shields: The Town