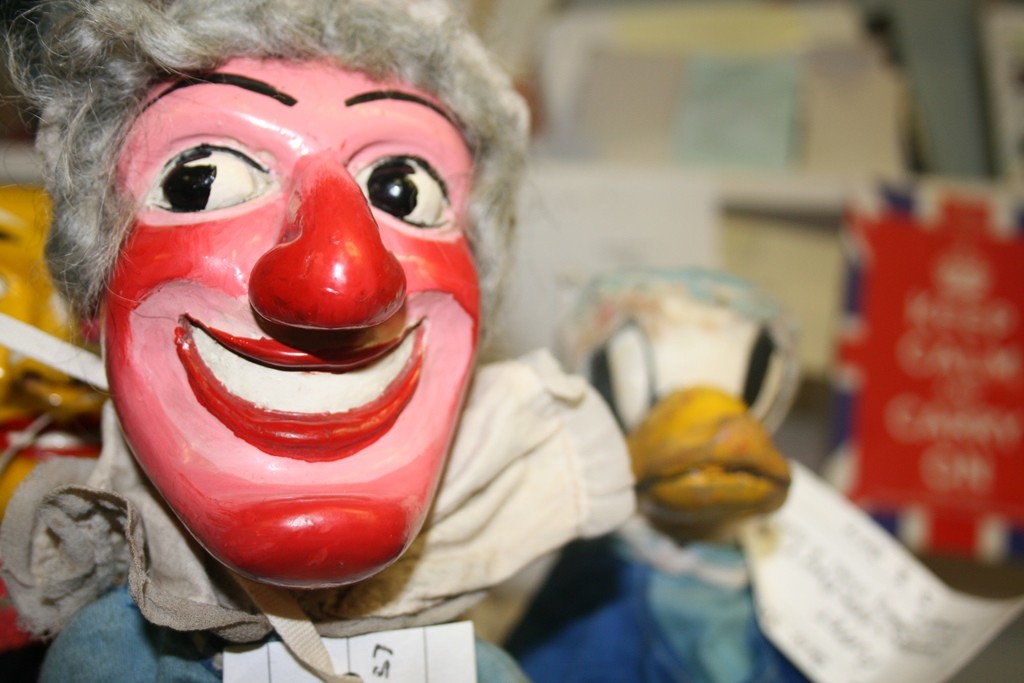 Hello again! After my previous post exploring a selection of postcards and photographs of the North and South Marine parks, we will be venturing a hundred feet or so forward right to the water’s edge. Although there were many things to do in South Shields during the summer, the main stretch of beach provided everything a holiday maker could ask for: an outdoor, saltwater pool, beach huts to protect fish and chips from the sand blowing in the wind, pleasure boat hire, donkey rides, and ample space to set up facing the ocean for the day. This post will explore images of what is known as the North and South sands, the area either side of the South Shields pier. The side to the North is often referred to as Littlehaven (between the Groyne and the South Pier), and the compass South sands is referred to as Sandhaven (between the South pier and the Trow rocks). The below postcard shows the area in the top right hand corner. Ocean road runs down the right hand side, joining into King’s Street and ending with the Old Town Hall and the Ferry landing in the bottom right hand corner. I will explore the Fairground, Marsden Beach and the Town in later posts. 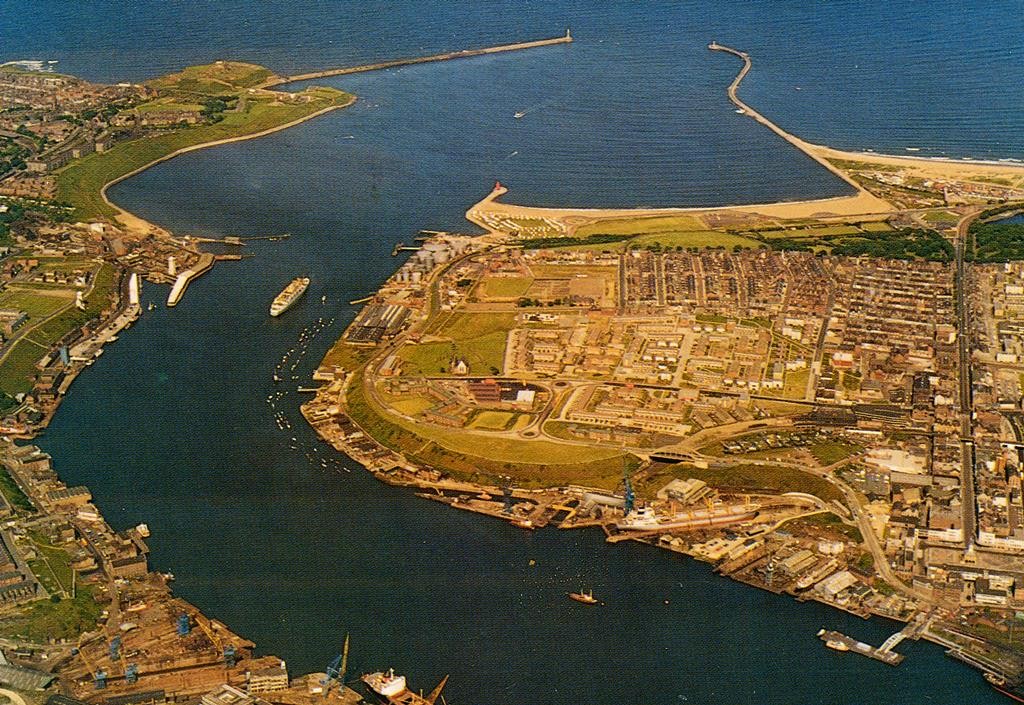 TWCMS : 2008.1533. Postcard from the collections at South Shields Museum and Art Gallery. 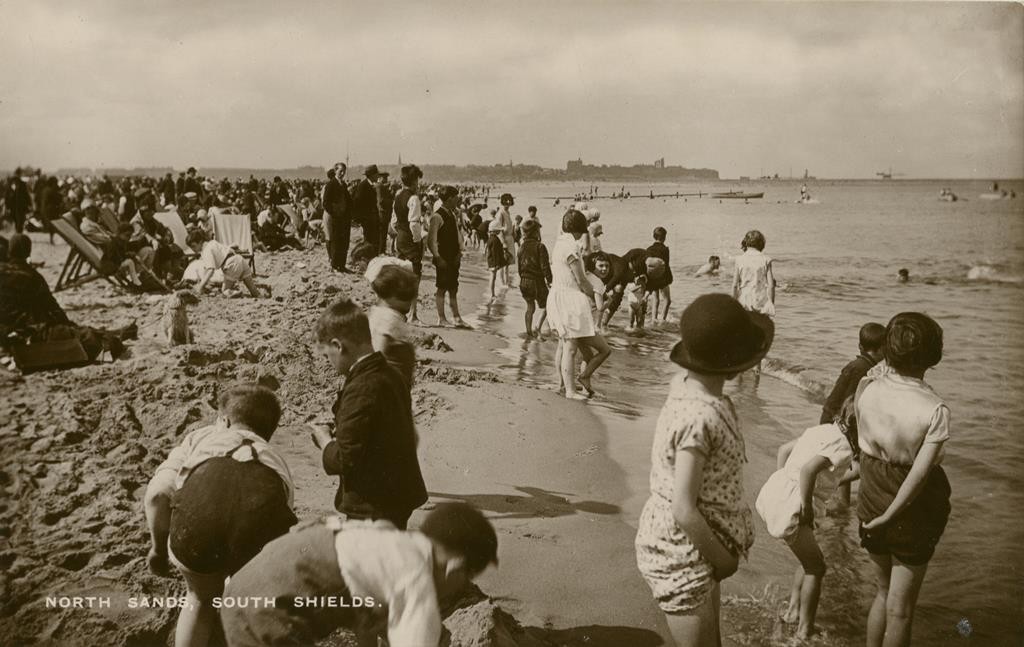 TWCMS : 2008.889.a. Postcard from the collections at South Shields Museum and Art Gallery.

The above postcard shows Sandhaven during a hot summers day in the 1930’s. Different coloured boards were placed in the sea to separate men, women and children, and the area next to Trow rocks was reserved for the more daring and experienced swimmer, due to the choppy tides and jagged rocks. This appears to be mainly the children’s section, whereby those who wanted to brave the cold water under the watch of designed ‘life savers’ (a proto-life guard), who would patrol the area. The Poor Children’s Association was formed in 1891, bringing thousands of needy children from the inland North East to the seaside each year for day trips out; some may be included in this postcard. The south sands could hold 234 sites for private beach tents (shown below during the 1930’s), which were available for hire alongside deck chairs and sunshades. In 1960, a day’s hire on the deck chair would cost 9d, while a tent would cost 3s. There were also fixed beach huts, which were owned by St John’s Ambulance, businesses, and private hires. 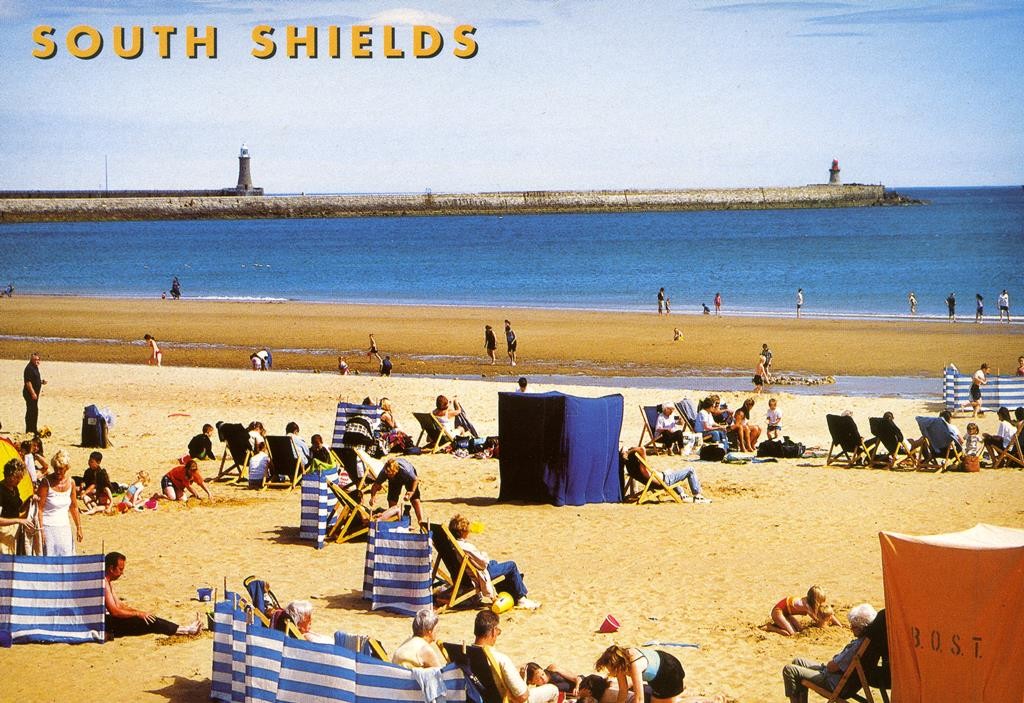 TWCMS : 2007.228. Postcard from the collections at South Shields Museum and Art Gallery. 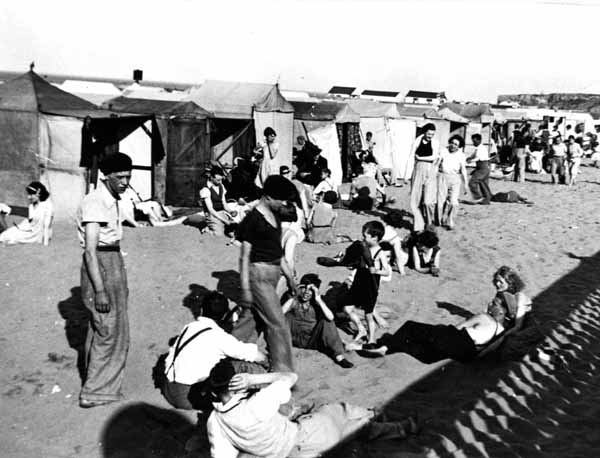 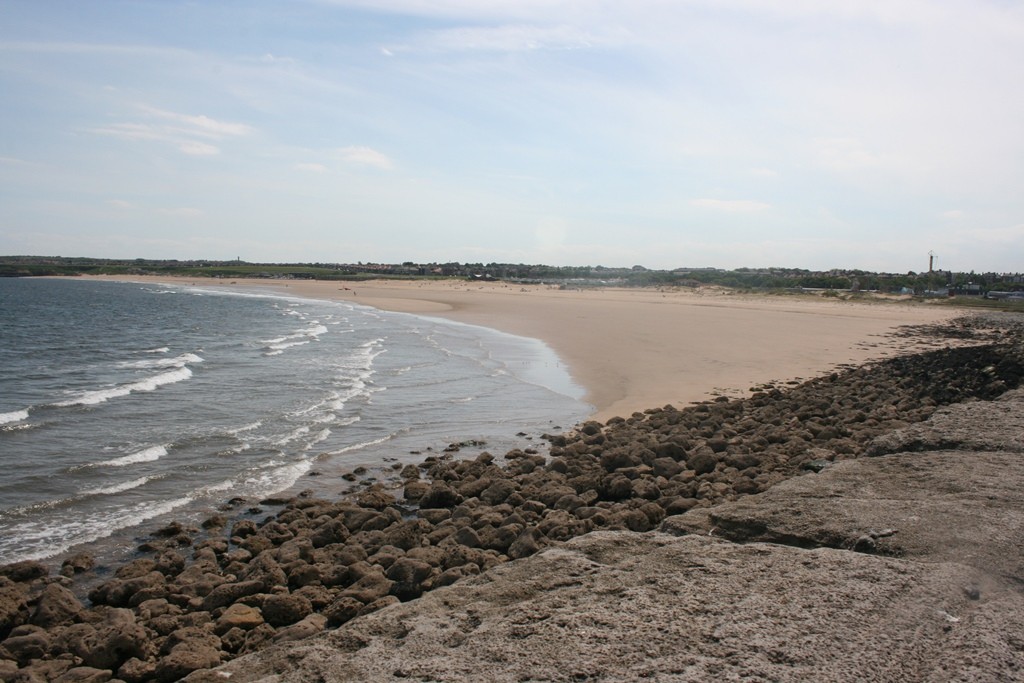 Photograph by Robyn Orr, 2015. View from the Pier towards Trow Rocks; the whole of Sandhaven. 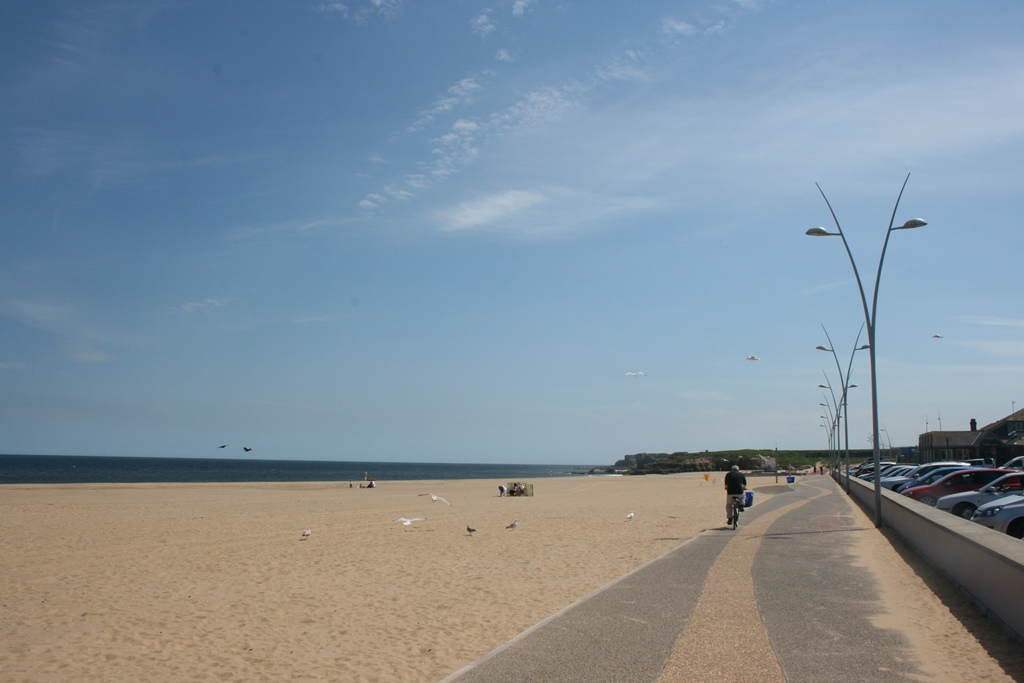 Photograph by Robyn Orr, 2015. Sandhaven Beach, view from near the Crab Shack towards Trow Rocks. 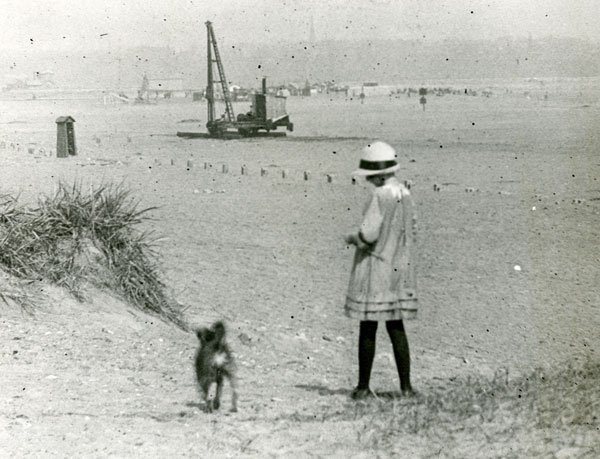 STH0000843. Copyright South Tyneside Images. Girl in 1900 walks her dog on the beach. Digger is there to create the promenade. 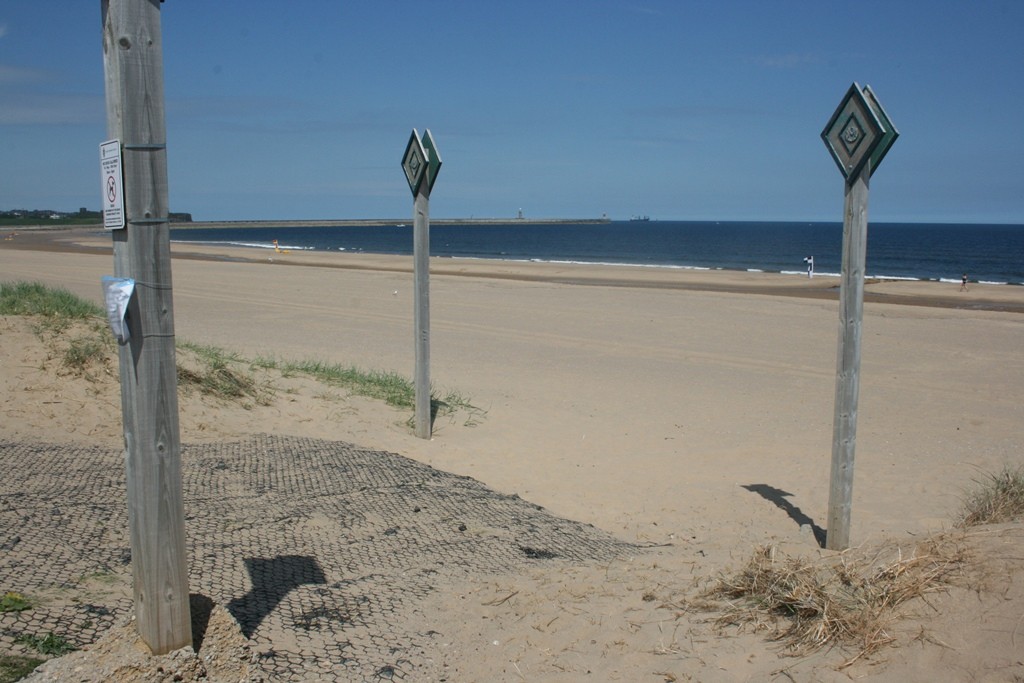 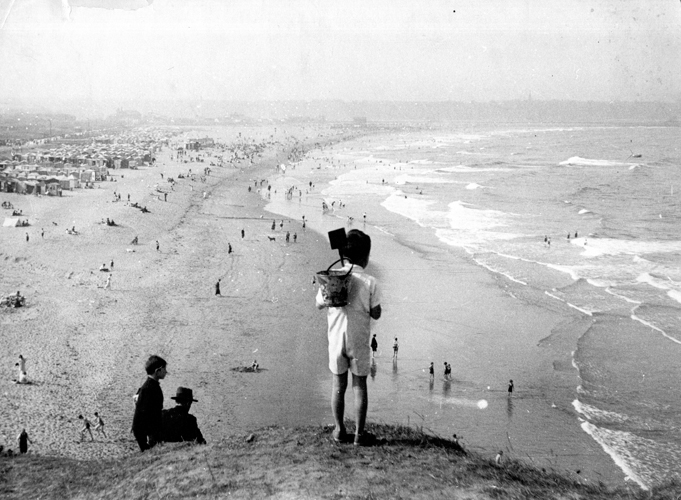 STH0006413. Copyright South Tyneside Images. Boy looks out from Trow Rocks over Sandhaven in the 1930’s – look at all those beach huts!! 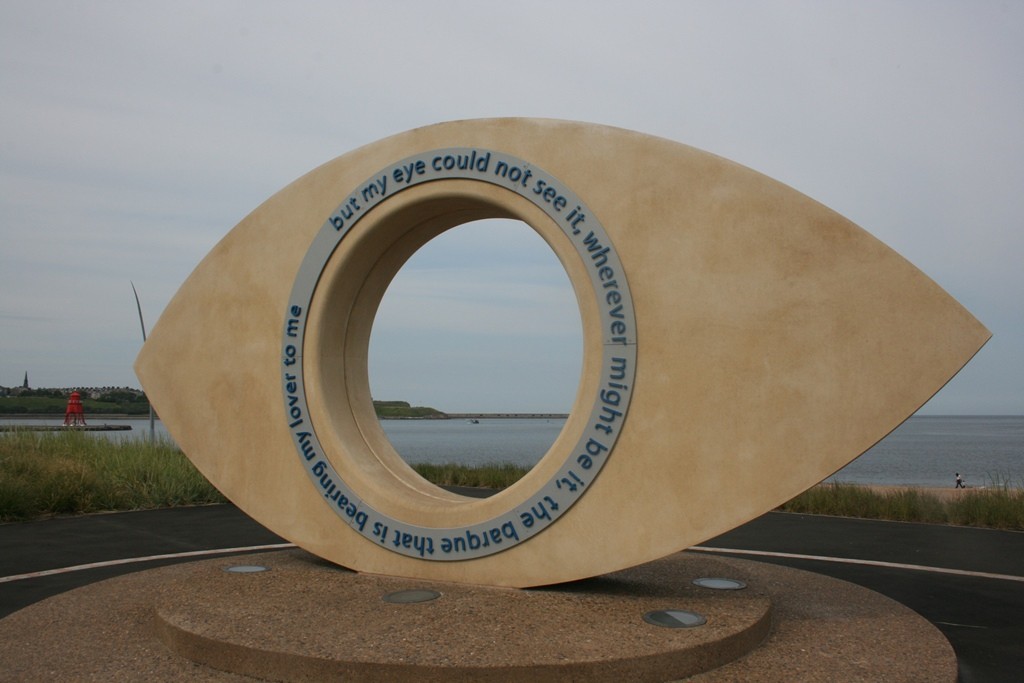 Photograph by Robyn Orr, 2015. The 2014 ‘Eye’ sculpture that looks onto Littlehaven beach. It allows the looker to see the middle of the two piers, or the ‘eye of the Tyne’, through the middle.

Mirroring the South sands on the other side of the Pier, the North sands can be referred to as Littlehaven, due to its proximity to the Littlehaven hotel. This beach is flanked by the Groyne, a little red lighthouse style beacon on a lifted walkway (1882), for the purpose of preventing the sand entering the Tyne and to help guide ships. It will flash different colored lights to indicate where the boat was entering the mouth of the Tyne; if on-course, a white light would flash, while if too much to the left or right a red and green light will flash respectively. The north sands were much more popular for boat and donkey rides, as seen in the postcards below; the mechanical elephant shown in the photograph from the 1950’s shows how temporary rides would feature on the sands. Chuggy boats were erected in the summer months, as well as the pleasure boats which would depart and alight on the beach. Notice the change in beach attire, from coats in the 30’s to shorts in the 00’s! 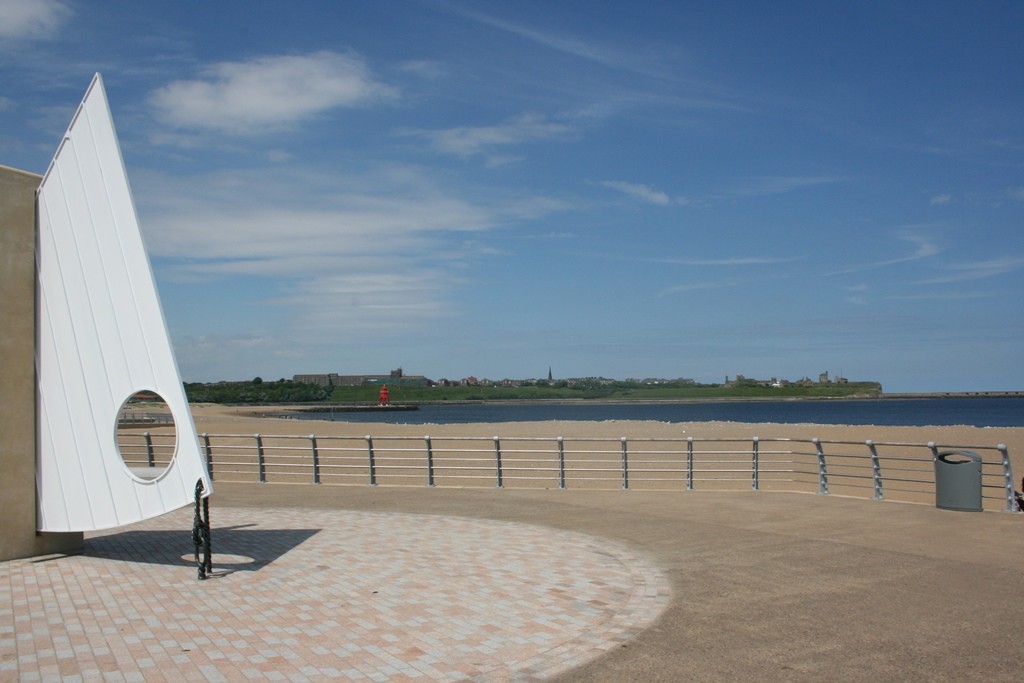 Photograph by Robyn Orr, 2015. View of Littlehaven from the Pier side, and the ‘Sail’ companion piece to the above ‘Eye’. 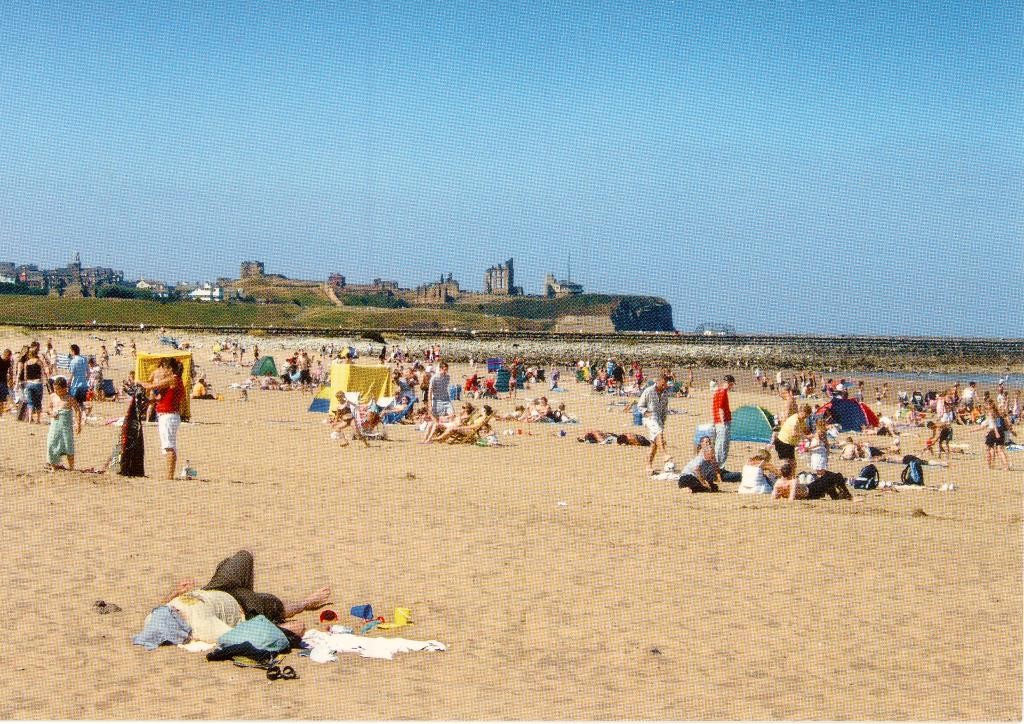 TWCMS : 2007.3087. Littlehaven beach on a modern, busy summers day. Tynemouth Priory is visible in the background. 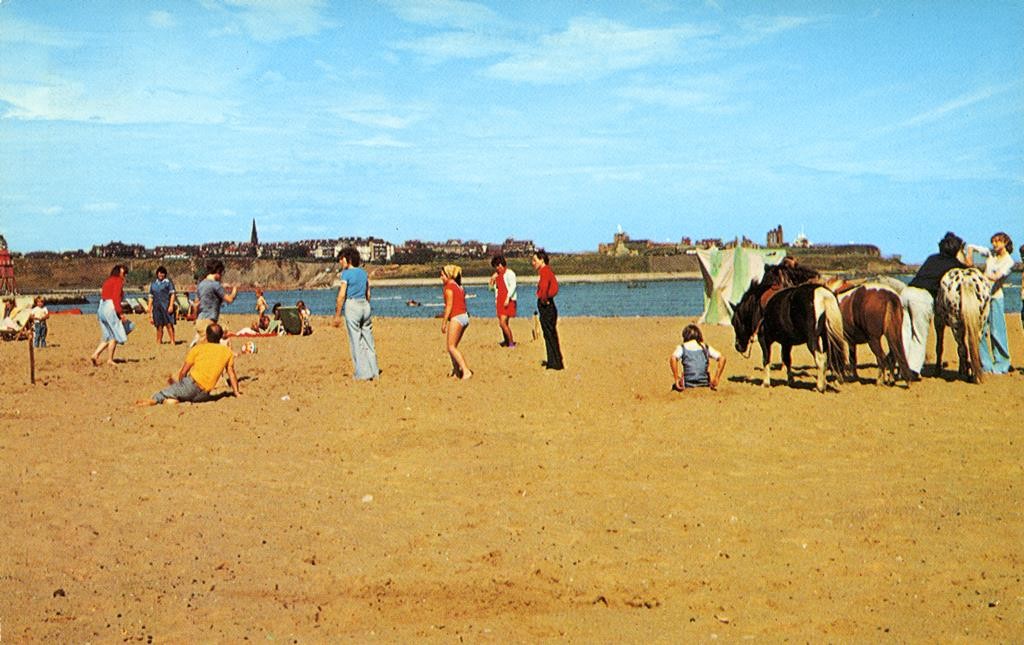 TWCMS : 2009.2378. Postcard from the collections at South Shields Museum and Art Gallery. Some excellent 70’s attire. Ponies ready to take children for a ride. 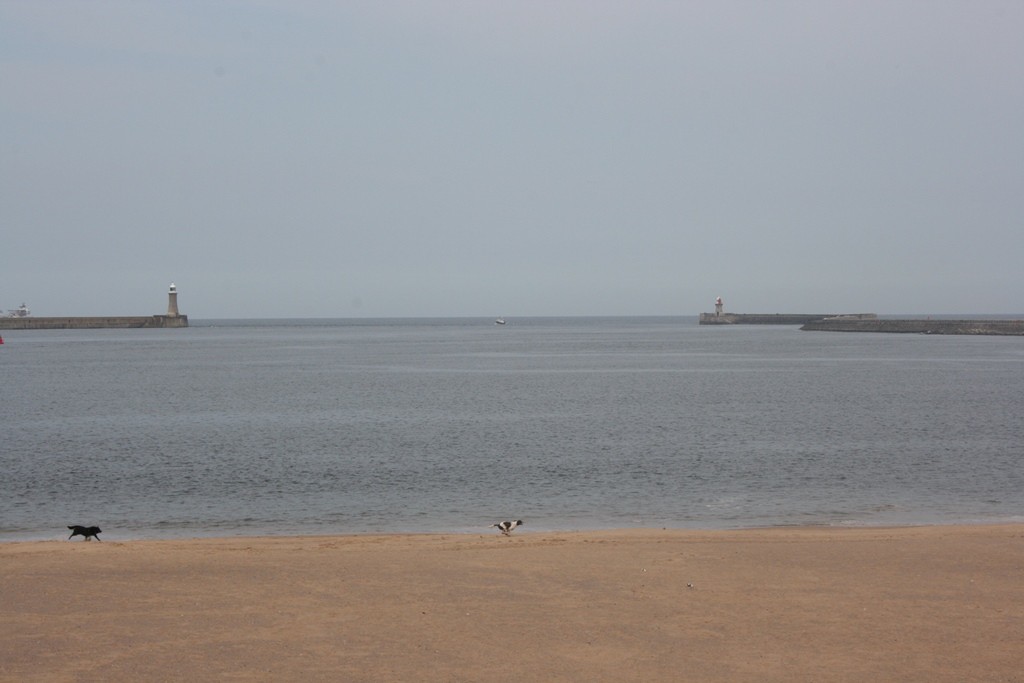 Photograph by Robyn Orr, 2015. View between the Piers at Littlehaven. 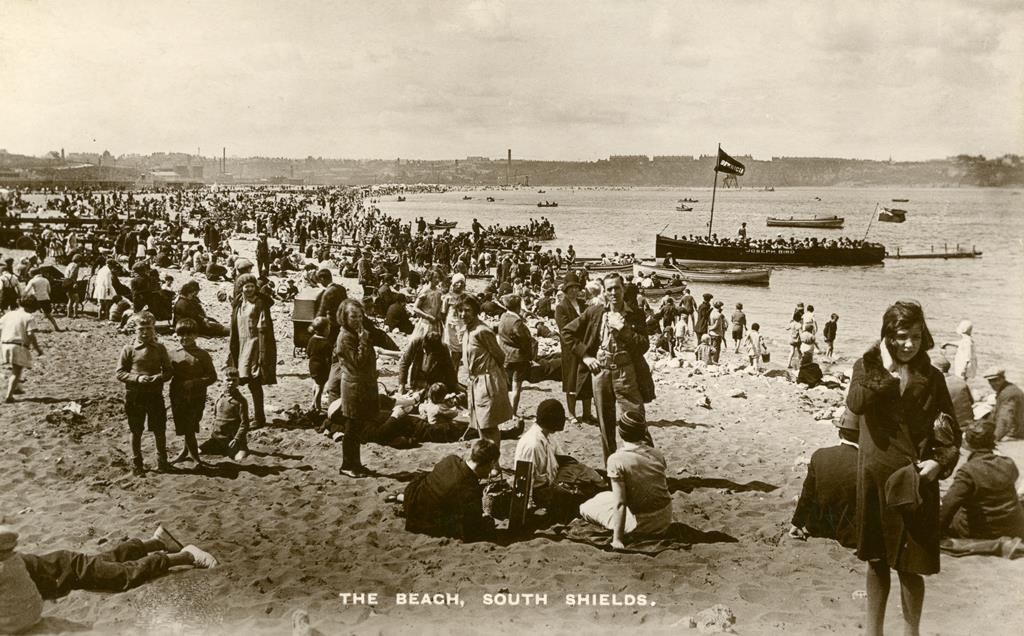 TWCMS : K4563. Postcard from the collections at South Shields Museum and Art Gallery. 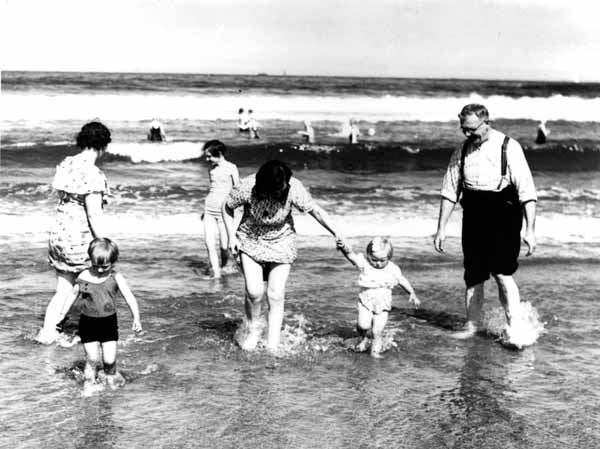 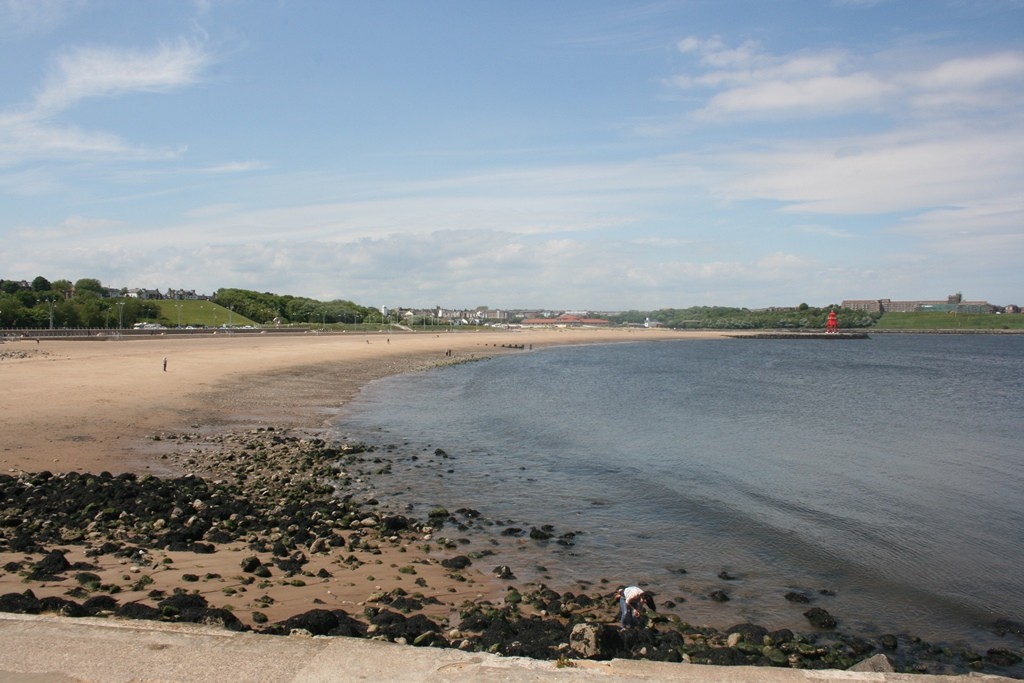 Photograph by Robyn Orr, 2015. Taken from the edge of the Pier walk. 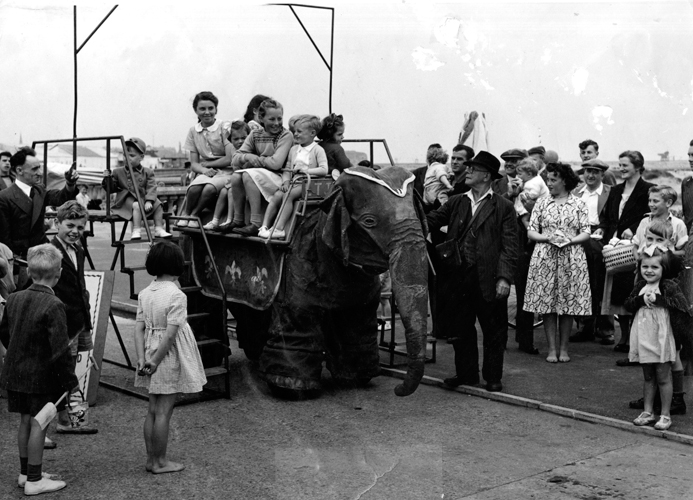 Thanks for reading! Please leave any comments below – I’d love to hear your own seaside South Shields stories. My next post will be on Marsden Beach.