‘Saved by a Cat’ – a feel good story for Christmas

A few months ago I spent a morning at North Tyneside Local Studies Library, with my colleague Sarah Younas, looking through old editions of the Shields Daily News. We were searching for the stories behind some of the First World War mugshots in our album of North Shields criminals. While I was carefully reading through the newspapers on microfilm I came across a feel good story which captured my imagination and I decided it would be nice to share it with our readers.

The story appearing in the Shields Daily News of 10 December 1914 and relates to a Lieutenant Lloyd of the Grenadier Guards, whose life was saved by a cat. I’d come across heart-warming stories of heroic deeds by dogs before but this was a first for me. 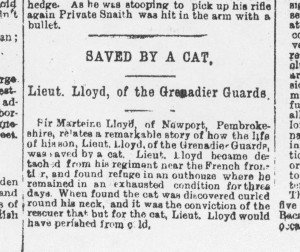 “Sir Marteine Lloyd, of Newport, Pembrokeshire, relates a remarkable story of how the life of his son, Lieut. Lloyd, of the Grenadier Guards, was saved by a cat. Lieut. Lloyd became detached from his regiment near the French frontier and found refuge in an outhouse where he remained in an exhausted condition for three days. When found the cat was discovered curled round his neck and it was the conviction of the rescuer that but for the cat, Lieut. Lloyd would have perished from cold.”

It’s not clear whether the cat was decorated for its heroism but I’d like to think it got a treat of some sort. Before I get carried away any further, I’d better return to my day job cataloguing the records of the South Shields shipbuilding firm John Readhead & Sons. I hope all our readers have a great Christmas and if any of you have any tales of feline heroics please do send them in. 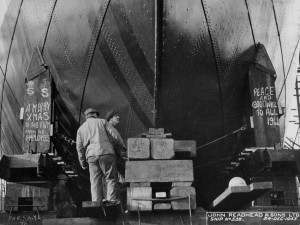 Christmas message from the workers preparing for the launch of ‘Empire Curzon’ at Readhead’s shipyard, South Shields, December 1943 (TWAM ref. 1061/1053)