Running with the Greats – a guest post by David Wright

With the Great North Greats exhibition now open at Discovery Museum, visitors have been pouring in, taking our visitor counter to almost 35,000 already! 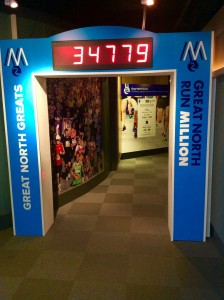 The entrance to the Great North Greats exhibition at Discovery Museum

The exhibition brings together the world of sport and industry, using the one millionth finish of the Great North Run last year as the starting point to explore other amazing achievements to come from the North East.

With so many North East sporting greats represented in the exhibition, this week I was eager to get outside, follow in their footsteps and create some sporting history of my own.

Enlisting the help of my friend Dan, currently in training for his first Great North Run this year, we devised a special running route, passing by important landmarks for five of the greats featured in the exhibition.

The route began in Heaton, outside the factory where Charles Parsons founded his business in 1889, manufacturing his revolutionary steam turbine. 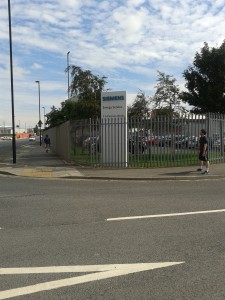 Dan warming up for the start of the run

During the First World War, after Charles’ son had signed up to fight, Parsons’ daughter Rachel became director of the Heaton Works, an incredible and unusual position for a woman at that time. Rachel Parsons oversaw a workforce bolstered by women young and old; filling the jobs left behind by enlisted men and aiding the war effort through the production of searchlight reflectors, used to locate enemy aircraft. Amazing photos and catalogues from this period are on display as part of Great North Greats.

Spirits were high at this point, the run began at a leisurely pace, and as we looked down into the Ouseburn Valley from Byker Bridge the sun began to break through the clouds overhead.

It wasn’t long before we were crossing over the central motorway, the site of our second landmark. Dan very wisely did some stretches while I looked down at the road and imagined the cars replaced by tens of thousands of runners, starting their long pilgrimage to South Shields. 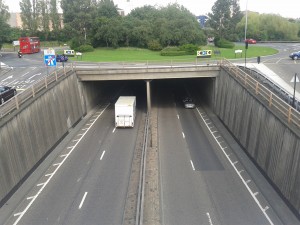 Long before the enthusiastic amateurs set off on the day of the Great North Run, the wheelchair athletes have their race, and one Great North Great has led that field more than any other. Baroness Tanni Grey Thompson has won the Elite Women’s Wheelchair race eight times, making her the most successful Great North Run athlete of all time. The trophy presented to her each time is now on display in Great North Greats.

After retiring from the sport, Tanni began to volunteer on one of the water stations along the course – I told Dan to watch out for her on the day.

We didn’t have to wait long to reach our next landmark, which was just down the road on Mosley Street, Newcastle. It was here that Sir Joseph Swan worked in the 1800s, tirelessly experimenting until he succeeded in creating the incandescent lightbulb. The beautiful ornate lamp-posts on Mosley Street serve as a reminder that this was the first street in the world to be lit using the same type of bulb that is commonly used today. 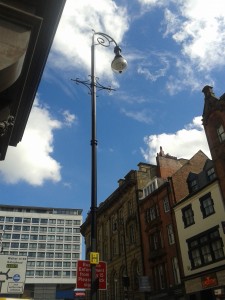 Swan’s invention was so ground-breaking, that when first made publically available, a single bulb would cost the equivalent of £140 today. This style of bulb, produced in 1881, can be seen along with Swan’s laboratory notebook in the Great North Greats exhibition.

Heading down to the Quayside, we then crossed the Swing Bridge into Gateshead. The bridge was designed and built by Lord William George Armstrong and opened in 1876. Using hydraulic pumps invented by Armstrong, the bridge is able to twist, allowing large ships to pass through. Access for ships was essential for Lord Armstrong’s Elswick Works, further up the river. The works employed over 20,000 men at their peak, leading the way in the manufacture of armaments, automobiles and ships. 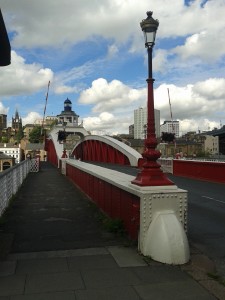 With four of our five greats crossed off the list, we were making good time, but the toughest stretch was yet to come. From the Swing Bridge we were heading to Whickham, to visit the final resting place of champion rower and revolutionary boat builder Harry Clasper.

The historical facts with which I had regaled Dan throughout the journey had dried up along with my throat at this point. He didn’t seem to mind.

Running alongside the sun kissed river, I thought of Clasper, Chambers and Renforth, the three great rowers of the Tyne. I thought of the crowds of thousands that would line these river banks to watch them compete and their determination to keep going when their bodies were telling them to stop.

Before heading up through Dunston to our final landmark, we stopped to look across the river to the former site of the Elswick Works, now the location of a cluster of new businesses bringing innovations to our region, including The Great Run Company itself. 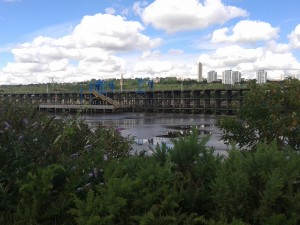 Our inexperience in planning a running route really began to show at this stretch. I had heard rumours of the vertigo-inducing, morale destroying hills from Dunston to Whickham, but may have underestimated quite how steep they actually were. The sun was not out friend at this point and by the time we reached the top, I was unable to look down for fear that my jelly-legs would cause me to topple right back down to the bottom. 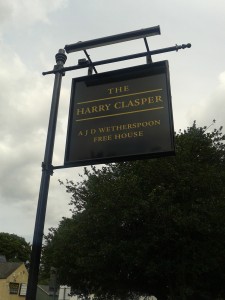 The temptation to stop was immense, but we managed to keep going, turning the corner to a churchyard and dashing up a few steps, before coming face to face with the man we had run almost 8 miles to see.

Having started working on the Great North Greats project over a year ago, I feel that I have come to know Harry Clasper rather well and seeing the impressive monument to him filled me with pride. This was a true local hero who defied the odds to bring rowing glory to the North East and changed the sport of rowing forever. 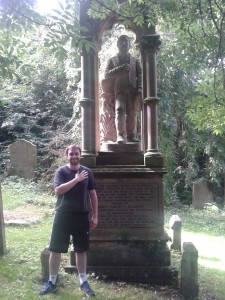 Dan, on the verge of collapse 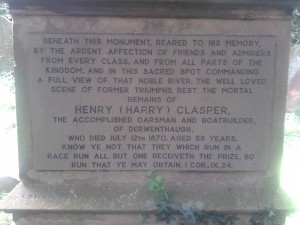 Local legend in Whickham states that running around the memorial three times while chanting the name Harry Clasper will lead to the great man climbing down from his perch and chasing you out of the graveyard. Unfortunately I was too exhausted to test the validity of this story!

Fittingly Clasper’s memorial looks through the trees to the River Tyne below, the scene of many of his rowing triumphs. 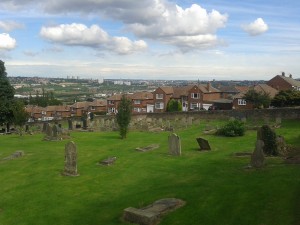 I doubt that our route will catch on in quite the same way as the Great North Run, but this was our own little piece of history, running with the greats.

Learn more about Parsons, Grey-Thompson, Swan, Armstrong and Clasper at Great North Greats, on show at Discovery Museum until October 18