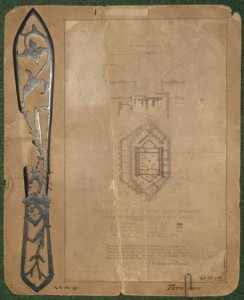 Letter-opener made out of wood from the 'Roman' bridge over the River Tyne, with printed certificate

Not souvenirs of a Roman bridge, but souvenirs made from a Roman Bridge! This object, thought to be a letter-opener, comes with a signed certificate to identify it as a souvenir made from wood recovered from the Roman bridge over the River Tyne.

In 1872 the old Georgian Bridge across the Tyne between Newcastle and Gateshead was being demolished to make way for the Swing Bridge, and when they reached the third pier from the Gateshead side the engineers found wooden timbers underneath the stonework from the medieval and the Roman bridges, as shown on the certificate. As it turns out, it is probable the ‘Roman’ timbers are actually the medieval pier, and what was thought to be the medieval pier was a medieval starling (a protective timber framework round the pier). 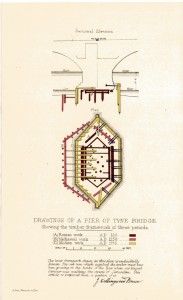 A copy of the certificate 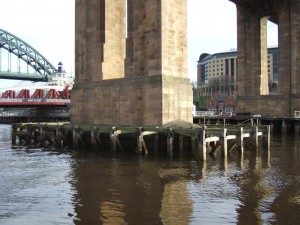 Wooden framework protecting a pier of the High Level Bridge

Over the next couple of decades a surprising number of items were made out of the wood from the ‘Roman’ bridge. So far we have come up with over 15 pieces, ranging from a book-case to the handle of a trowel. Some of the objects stayed in the area and have become part of our collection (some of you might have seen two of them in our Crossing the Tyne exhibition), but other pieces travelled further afield. We know one piece went to Dorset, and another to America, while one was given to Queen Victoria for her Golden Jubilee.

Text from the certificate

Have a look at the attached document for the full list of what volunteers of the Community Archaeology project Wall Quest have found so far. Do you know of any other examples? Do you have any information on the whereabouts of those items currently listed as missing? Get in contact!roman bridge souvenirs