One of the Great North Museum’s most recent acquisitions is a fine example of rock art that was found at Birney Hill near Ponteland during an archaeological investigation.  The sandstone rock, weighing nearly 3 tonnes, is decorated with distinctive cup and ring symbols that are a common feature of prehistoric rock art.  It is highly unlikely that the rock was originally from Birney Hill as it is clearly a part of a much larger rock that has been recut at some stage.  It is possible that it was brought to Birney Hill from another location and was then used as part of a building or some other structure. 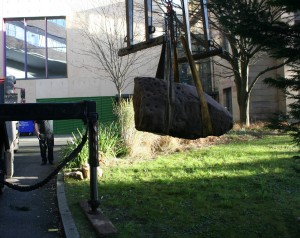 Using a crane to lift the Birney Hill Rock into place. 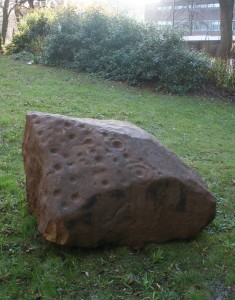 The rock joins an extensive collection of other pieces of rock art from Northumberland, some of which is on display in the Ice Age to Iron Age Gallery of the Great North Museum.  This type of artwork was produced in Britain from the early Neolithic up to the Bronze Age; a period of well over two thousand years.  The majority of rock art is found in the landscape on rocky outcrops or boulders and it is likely that the Birney Hill rock originally came from such a context.  The meaning of the abstract symbols on rock art is not known, although it is thought that any meanings they had may well have changed over time.  By the Bronze Age many examples of rock art are associated with burials.  Carved slabs were used to cover Bronze Age burial cairns, known as cists.  The designs on these slabs were always placed so that they faced inwards towards the deceased and it is clear that the symbols were associated in some way with beliefs about the dead.  Originally they were probably connected with the belief system of people living in the Neolithic and there have been numerous theories about their significance.  Suggestions range from the idea that they were maps or territorial markers to the notion that they were connected with shamanistic rituals perhaps involving hallucinogenic drugs.  The abstract nature of the designs, produced by communities with no form of written records, means that it is impossible to produce a definitive answer to the question of meanings. 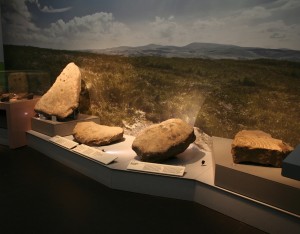 Rock art in the Ice Age to Iron Age Gallery

The North East of England is particularly blessed with large quantities of rock art in the landscape and a number of projects have been carried out over the years to map this phenomenon.  Newcastle University, for example, has produced a website (http://rockart.ncl.ac.uk/) that documents the remarkable work of Stan Beckenstall, who has spent over 40 years finding and recording examples of rock art in Northumberland.

The rock from Birney Hill is an impressive addition to the Great North Museum’s rock art collection and will extend our knowledge of this enigmatic art form.  The rock is currently located in the museum’s grounds near the school’s entrance on Claremont road.