This picture shows Grey Street, Newcastle, when it was still just a twinkle in the eye of the developer Richard Grainger. The scene is an ‘artist’s impression’, painted by John Wilson Carmichael for Grainger to show to investors, Newcastle corporation, and others to convince them that Grey Street would be a glamorous and stylish centre for business, banks and shops, and worth the enormous expense of building. The brick buildings nearest the viewer show the top of Dean Street as it was at the time. 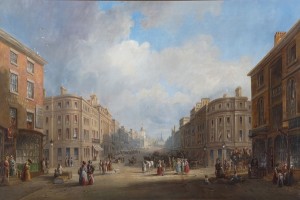 John Wilson Carmichael, ‘Proposed new street for Newcastle’, 1831. Purchased with the aid of a grant from the MLA/V&A Purchase Grant Fund, 2010

This historic painting is on show in the exhibition ‘19th-century Art in Newcastle’ at the Laing Art Gallery until April 29th 2012.

Grainger started building Grey Street from 1835. Carmichael’s picture is dated 1831 and so shows that Grainger was planning Grey Street much earlier than previously thought (the date has been examined under magnification, and is 1831, not a misreading of 1834). 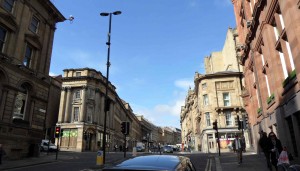 The general appearance of Grey Street today is very much as Grainger envisaged. 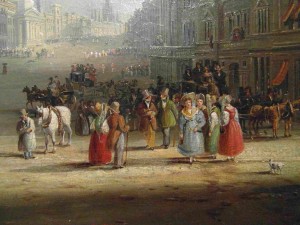 Detail from the centre of Carmichael’s painting

Carmichael’s painting gives us a lively picture of Newcastle life in the 1830s. A farmer leads his horse beside a group of finely dressed ladies and gentlemen. (Newcastle was an important market centre, and animals in the streets were a common event.) 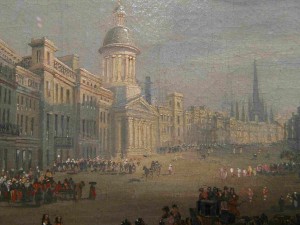 Detail from the background of Carmichael’s painting 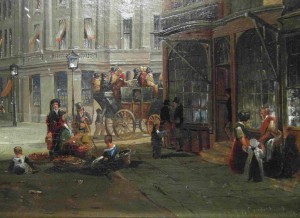 Detail from the right side of Carmichael’s painting

The background of Carmichael’s painting is imaginary – a picture of what Grainger hoped to build. However, the foreground is a real-life record of the buildings at the top of Dean Street. The shop on the right is a smart establishment with large windows filled with expensive glass. (This shop also has hoists for lifting heavy goods from delivery carts.)

Carmichael’s picture shows two contrasting shopping experiences. Right in front of the stylish shop, a woman has set up a roadside display of produce for sale.

A stagecoach in the background is travelling along Mosley Street. It’s crowded with passengers sitting outside, well wrapped up against the breeze (the fare was cheaper than inside). 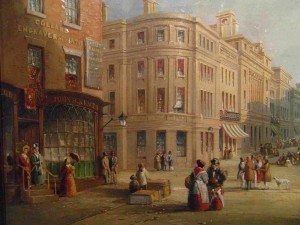 Detail from the left side of Carmichael’s painting

Collard’s shop and the facing building at the top of Dean Street are part of the previous development in Newcastle in the 1780s, designed by Newcastle architect David Stephenson (1756-1819). The buildings’ rectangular shapes, restrained decoration, and regular placing of windows were very different to the overhanging gables, decorated strips of windows, and black-and-white half-timbering of earlier buildings. 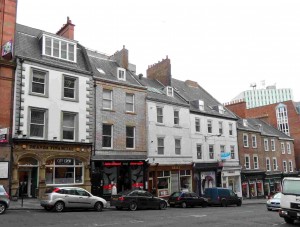 Late 18th-century buildings on the east side of Dean Street

The two shops Carmichael shows on the corners of Dean Street are no longer there. Some buildings from the same time are still standing in Dean Street, but the shop fronts have been changed quite a lot since they were built.

A map produced by Thomas Oliver in 1833 shows the layout of the town before Grey Street was built. Dean Street is at the bottom of the map section, to the right of St Nicholas Church (now Cathedral). 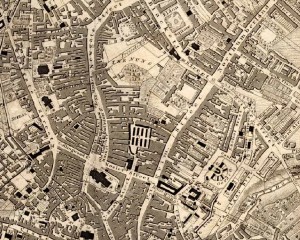 Detail from Thomas Oliver’s map of Newcastle of 1833

Richard Grainger bought the huge estate of Anderson Place after the death of its owner George Anderson in 1831. The estate is shown in between Pilgrim Street and the area marked THE NUNS on the map. Grainger also bought Nun’s Field at the same time (long before, it had been the grounds of a nunnery). The new Grey Street was built over Anderson Place– Lloyds Bank occupies the site of the house.

The construction of Grey Street meant that the meat market (shown as a roughly rectangular black outline around 8 black rectangles) had to be demolished. However, Grainger persuaded Newcastle council to sell him the old market and buy a replacement from him – this was the Grainger Market, opened in 1835. After this, Grainger could get on with developing Grey Street.

In his historical notes in  Architectural and Picturesque Views in Newcastle Upon Tyne of 1841, M Ross wrote:

The capabilities of this piece of ground, twelve acres in extent, seem to have long engaged the attention of Richard Grainger, Esq., whose enterprising mind had been early attracted to the vacuum, as it might be called, in the very heart of the town.

Carmichael’s painting certainly supports the idea that Grainger had already been thinking of how he might develop the land before he bought it. 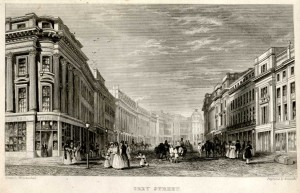 This is William Collard’s engraving from a drawing by Carmichael showing Grey Street after it was completed. It is one of the illustrations from Architectural and Picturesque Views in Newcastle Upon Tyne of 1841, published by M Ross and William Collard. Ross’s accompanying text commented:

The carriage road of this, as well as of the other new streets, is Macademized; a wide flagged foot-path on each side affords a convenient promenade to the pedestrian who may be disposed to examine the numerous splendid shops, &c., which sparkle in the sun-beams or the gas-lights around him. 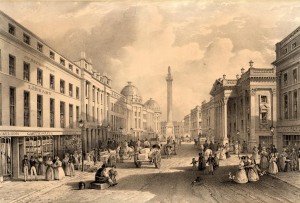 ‘Grey Street’, print from a design by JW Carmichael

Grey Street was an important addition to the routes through Newcastle. Previously, Pilgrim Street and Side had been the two main streets from Mosley Street to the north of the town. This print from a design by Carmichael of the upper part of Grey Street shows the busy roadway. Grainger had kept a domed building as a focal point, but moved it to the top of the street – this is the Central Exchange Buildings. The Theatre Royal is on the right. The Monument to Earl Grey, in the centre of the view, was completed in 1838, creating a spectacular new culmination to the view up the street.

Grey Street was described by renowned architectural historian Nikolaus Pevsner as ‘one of the finest streets in England’. In 2002, it was voted ‘Best street in the UK’ by BBC Radio 4 listeners. The street is a central part of the Grainger Town Conservation Area. 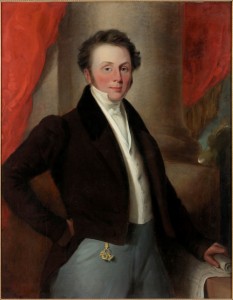 Richard Grainger at the age of about 31

Richard Grainger (1797-1861) was a remarkable man. He didn’t come from a wealthy family – his father was a quayside porter. He set himself up as a builder at the age of 20, and quickly expanded his business, helped by marriage to the daughter of a wealthy merchant. Grainger built several important building projects, including old Eldon Square in 1824-26 and Leazes Terrace in 1829, before developing the Anderson estate.

never before such extensive improvements effected in any one place by any individual; and that our canny town, “the coal-hole of the north” now stands, through his exertions, as proudly pre-eminent for architectural beauty, as it has …done for …mercantile enterprize and respectability. 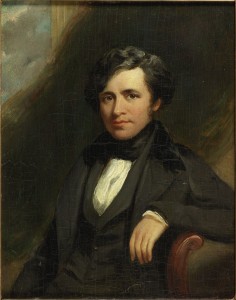 John Wilson Carmichael at the age of 40

The artist John Wilson Carmichael (1799-1868) was born in Newcastle. He was one of the leading artists of the area for many years. Although mainly known as a painter of ships and sea subjects, he also painted architectural scenes. Carmichael moved to London in 1846 to capitalise on the success of paintings he had shown in London exhibitions. (Carmichael’s view of the Quayside, Mayor’s Barge on the Tyne of 1826/7 is on show in the Northern Spirit display on the ground floor of the Laing Art Gallery.)

Carmichael’s painting of the proposed design for Grey Street remained in the Grainger family until the picture was sent for sale at auction. The subject of the painting and its importance for Newcastle was then spotted by Dr Grace McCombie, co-author of the Newcastle and Gateshead volume of the Pevsner Architectural Guides: City Guides. The painting was bought with the aid of a grant from the MLA/V&A Purchase Grant Fund.

More information about Grainger’s transformation of Newcastle can be found in these publications: A City of Palaces. Richard Grainger and the making of Newcastle upon Tyne, by Ian Ayris, and John Dobson: architect of the North East, by T. E. Faulkner, Andrew Greg. Both can be viewed in the Local Studies section of the City Library, and are published by Tyne Bridge Publishing.