Rhythms of the Cosmos – A Guest Post by Dr Andrew Fletcher

The Great North Museum: Hancock has a small but perfectly formed planetarium on the first floor. The computer-controlled system allows us to fly through the Universe, in space and in time, choosing the best viewpoint from which to investigate all kinds of wonderful phenomena. In this guest post, Dr Andrew Fletcher, one of our 2016 Great North Museum Fellows, describes a new planetarium show he is developing that should appeal to anyone with an interest in astronomy.

Everyone can see that the Sun moves across the sky and that the Moon is sometimes visible during the day and sometimes at night. Pay a bit more attention to the Moon’s position and you will notice that from one night to the next, if you look at exactly the same time, it moves with respect to the stars.  And over the course of about one month, you will observe a bright full moon slowly transition to a thin sliver of a new moon and back again.

It is also possible to track planets with just your eyes. Venus, Mars, Saturn and Jupiter can all be easily seen and if you pay extremely close attention and measure their positions over many years, you would find that they too move across the night sky, all at different speeds. And sometimes they seem to double back on themselves! 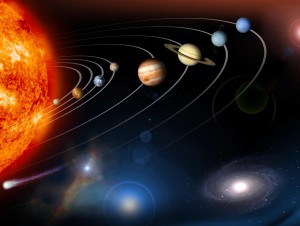 The Earth, Sun, planets, stars and galaxies are all involved in an intricate pattern of motion.

From the earliest times in human civilisation, thousands of years ago, people looked carefully at the night sky and tracked these different movements. Some of the cleverest scholars who ever lived tried their hardest to make sense of what was going on, inventing new methods of measurement and new branches of mathematics that we still use today. 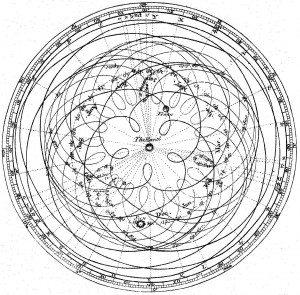 The apparent orbital paths of the Sun, Venus and Mercury around the Earth, according to the system of Ptolemy (2nd Century AD), in an illustration from the 1st Edition of the Encyclopedia Britannica, 1771.

In the end, it turned out that having the right viewpoint is the key to making sense of all of this movement in the night sky. With the correct perspective everything falls neatly into place. That’s where having a modern, sophisticated planetarium comes into its own. Seeing with your own eyes how the Earth orbits the Sun and why this causes the seasons, or how the changing positions of the Earth, Moon and Sun produce the phases of the Moon and the cycle of tides, gives a dynamic picture that books and diagrams can’t compete with. 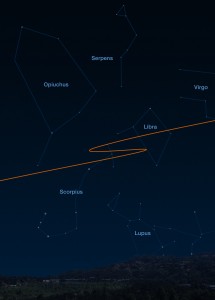 The position of Mars changes between January (right) and September (left) 2016, with respect to the background constellations. The occasional retrograde (or doubling-back) motion of the planets confused astronomers for millennia. (Image credit: NASA)

Astronomers now know that everything in the Universe is moving and our understanding of planets, stars, galaxies (my field of research) and the entire Universe itself all have to take into account this motion.

I have been spending my summer mornings, before the museum opens to the public, programming a new planetarium show called ‘Rhythms of the Cosmos’ that will be premiered on Wednesday 31 August, during the museum’s Space Week. There will be shows, which will last about 20 minutes, at 10.30am, 11.30am and 12.30pm and I will be available between shows to try to answer any astronomy questions.

Dr Andrew Fletcher is a Senior Lecturer in the School of Mathematics and Statistics at Newcastle University. His research interests are in radio astronomy, galaxies and the interstellar medium.