Revelations of racial discrimination at sea, discovered in the plans of the Sunderland shipbuilding firm, Bartram & Sons

I’m pleased to report that work continues apace with the Sunderland Shipbuilding archives project. Colin and I are both currently working on the records of Bartram & Sons Ltd. The Bartrams shipyard was located at South Dock, Sunderand and was unusual in that it launched vessels directly into the North Sea rather than the River Wear.

Last month’s blog mentioned an interesting plan of a CAM ship, which Colin discovered, and he’s been finding more fascinating items this month. Of particular interest are a series of plans of the ships ‘India’ and ‘Timor’, which were launched by Bartram & Sons Ltd in 1950 (yard numbers 329 and 330). The vessels were built for the Companhia Nacionale de Navagacao of Lisbon, Portugal. 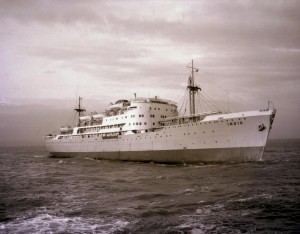 Bartrams seem to have been particularly proud of these vessels, which were the largest passenger vessels built in Sunderland for over half a century. However, an examination of one of the plans of the two ships hints at something much less praiseworthy. The plan concerned shows the ‘arrangement of emigrant spaces’ (TWAM ref. DS.BM/4/PL/1/329/18) and makes several references on the plan to spaces for ‘white emigrants … or cargo’. 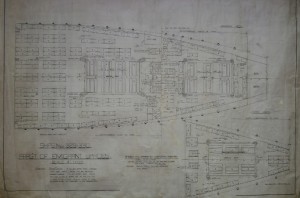 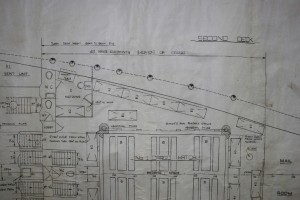 There’s further evidence of racial segregation in the hull specification for the ‘India’ and ‘Timor’ (TWAM ref. DS.BM/4/6/329/2), which I recently catalogued. Two loose pages of typescript notes, tucked into the specification, document the visit of a Dr Ferreira and Mr Ruis on 2 March 1949. During the visit it was agreed that the crew’s accommodation was approved “subject to certain movement of rooms to enable Greasers, Seamen and Boys to be more segregated from the remainder, as they are Natives …’.

While such discrimination is perhaps reflective of the era it is certainly no easier to stomach for that. However, one of the key roles of an Archive is to provide a window into the past, to document a society’s past failings as well as its achievements. It’s the least we owe to those who, with little power to speak out, may have suffered in silence.

4 Responses to Revelations of racial discrimination at sea, discovered in the plans of the Sunderland shipbuilding firm, Bartram & Sons