Replicas of the Cullinan Diamond

Collections & Objects   Natural Sciences
Posted by administrator on May 3, 2011     Permalink     Leave a comment

The Cullinan diamond is the largest gem quality diamond ever found.  It was found in the Premier Mine at Kimberley, South Africa, in January 1905, and weighed 3106 metric carats (one carat = 0.20 gram).  It had a good blue-white colour, and was very clear.  It was named after Sir Thomas Cullinan, the owner of the Premier mine. 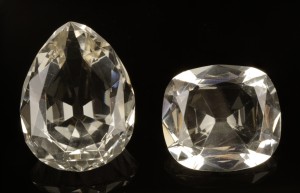 The diamond was sent to London, and taken to Buckingham Palace, where it was shown to King Edward VII.  Members of the Asscher family of Amsterdam, who had recently cut the Excelsior Diamond, came to London to cut the Cullinan.  As the rough diamond was too large to be cut into a single gem, it was first cleaved into smaller pieces, before the cutting and polishing could commence.

After eight months of work, the cutting and polishing was complete.  The Cullinan was cut into nine large stones and 96 smaller stones.  The two largest gems, the Great Star of Africa (Cullinan I), and the Lesser Star of Africa (Cullinan II), were presented to the King.  They were set in the Royal Sceptre and the Imperial State Crown respectively.

Eventually, the other large stones became the property of the Crown.

Cullinan III and IV, which became known as ‘Granny’s Chips’, were at first set in a crown for Queen Mary, but are now set in a brooch.  Of the other stones, three are set in brooches, and the smallest is in a ring.  They are sometimes worn by the Queen.

Replicas of the uncut Cullinan Diamond, and the nine largest stones cut from it, are on display at Sunderland Museum & Winter Gardens until mid May.