An earlier blog contained several images of the ship ‘Northern Star’ including an unusual one of workers preparing the slipway for the launch.  It reminded me of how rare and precious such images are. The Archives cares for tens of thousands of photographs in our shipbuilding collections but most of these focus on the ships themselves – in particular their construction, launch and trials. A lovely example is this early colour shot of the cargo ship ‘La Marea’ on her sea trials in October 1958. She was built by the Sunderland firm of Bartram & Sons Ltd. 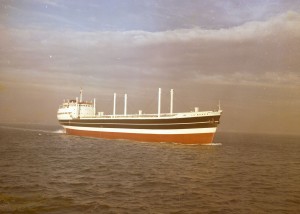 I decided that it would be a good idea to redress the balance and to celebrate the work of the men and women who have played such a vital part in the history of Tyne & Wear.  The Archives is proud to present a new flickr set of a dozen images from the Sunderland shipyards. Most of these belong to our collection for the illustrious shipbuilding and engineering firm William Doxford & Sons Ltd.

The set includes images relating to a variety of trades. There are views of the firm’s commercial office and locomotive shed as well as its world-famous Engine Works. 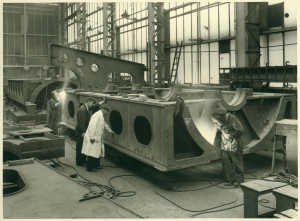 One of my favourite images (although not included in the flickr set) is this view of workers standing on the slipway at Doxfords following the failed launch of the ‘Quiloa’ on 15 July 1905.  The failure was caused by subsidence of the ground near the river. The vessel was not successfully launched until 20 July. 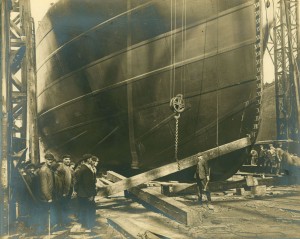 Although many of the images relate to Doxfords, there are a few for other Sunderland shipyards.  A particularly significant one is this progress shot taken during the construction of the ‘Nicola’ by Austin & Pickersgill Ltd. She was the first SD14 to be completed. 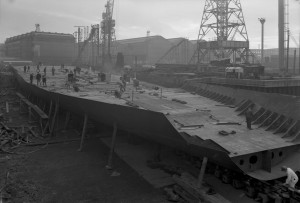 Austin & Pickersgill Ltd developed the SD14 in the mid-1960s. It was designed as a replacement for the surviving ‘Liberty ships’, which were built by American shipyards during the Second World War.  The SD14 proved to be hugely successful and over two hundred vessels were built to the design by Austin & Pickersgill and its licensees.

These images together with many others can also be enjoyed at Sunderland Museum and Winter Gardens, where they’re on display on a big screen in the Shipbuilding gallery.  If you’ve enjoyed these images you can find others relating to the Sunderland shipyard of Joseph L. Thompson & Sons Ltd in an earlier flickr set, inspired by the Grayson Perry exhibition ‘The Vanity in small differences’.

I have to admit, though, that there’s something special about holding a photograph in your hand or browsing through one of the superb photograph albums held by the Archives.  For me it really heightens my sense of connecting to the past. If you’d like to enjoy that special feeling then please come along to Tyne & Wear Archives, where I can promise you’ll get a warm and friendly welcome. You can find details of our location and opening times on our website.

We can also provide copies of many of the images we hold so if you’d like a print of one yourself or know someone who would love one for Christmas then please do get in touch by phone (tel: 0191 2772248), by e-mail (info@twarchives.org.uk) or by visiting the Archives searchroom.

2 Responses to Remembering the shipyard workers