I was having a bit rummage and found this marvellous sepia photograph dated 1880:- 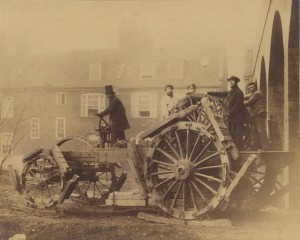 At first sight, it appears to show a dastardly Victorian villain attempting to flee the scene of some dark deed aboard a horseless, minion-powered vehicle with feet on its wheels!  Has the fiend left a distressed damsel tied to the tracks of the railway viaduct to the right?  Will someone save her from the rushing wheels of the Scotch Express, due any minute???

Worth a spot of research, I thought.

Sadly (or perhaps not, if you happen to be a Victorian damsel (or, indeed, a train driver)), the reality, such as I’ve been able to glean, turns out to be somewhat less dramatic, although still quite interesting.  The photograph shows a man-powered Burrell-Boydell tractor transporting dressed stones on an urban building site.  Its curious wheels were constructed by C Burrell of Thetford, Norfolk, to James Boydell’s 1846 patented “dreadnaught wheel” design.  This precursor of the modern caterpillar track had several articulated boards loosely attached around the circumference of each wheel and pivoted so that any two adjacent boards formed a flat wooden road beneath the wheels.  The weight which would otherwise be concentrated on the ground through the wheel rim’s small point of contact was thus spread over a much wider area, preventing the carriage from sinking into, say, loose earth. 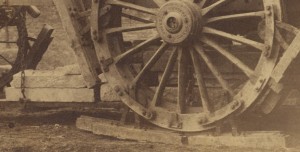 The huge driving wheels at the rear of the vehicle were geared to two smaller wheels above them which, in turn (and in the absence of giant hamsters) were each pushed around by two men.  Presumably the occasional use to which this particular tractor was put did not justify incorporating a steam engine, or perhaps the weight of a steam plant would simply have made the carriage too heavy for the site.  The stones being transported are slung beneath the carriage, having been lifted clear of the ground by the on-board winches.

So quite a nifty bit of kit, and “zero-emission” too!

One thing I haven’t been able to establish is the location in the photograph.  Does anyone recognise any of the buildings in the background?  It would be brilliant to discover what was being built and what’s there now.

In the meantime, I’ll pop the picture back in its drawer and quietly ponder an age when building site tractor drivers wore top hats to work… 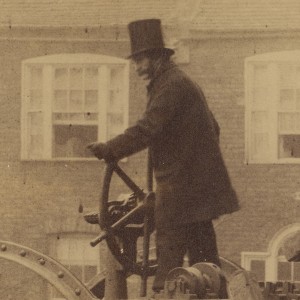 11 Responses to Reinventing the Wheel