Recent discoveries and challenges on the Sunderland Shipbuilding Archives Project

For the past month I’ve been busy cataloguing the ships photographs of several Sunderland shipyards, including those for Sir James Laing & Sons Ltd and J.L. Thompson & Sons Ltd. There are thousands of fantastic images of ships launches and sea trials. These photographs will certainly be of most interest to maritime researchers but they should also be of interest to local historians and family historians.

The images may even be useful to those researching the history of fashion. That last statement might seem a little strange until you consider that our shipbuilding collections include hundreds of photographs of men and women attending ships launches dressed in all their finery. A typical example is this photograph taken in September 1957 at the launch of the ‘Harpagus’ by William Doxford & Sons Ltd. 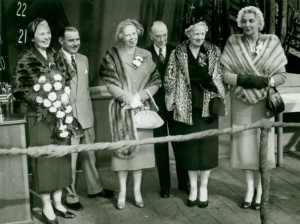 It’s the ships, though, that are the real stars and the photographs that I’ve been cataloguing during the past month include some fantastic images. One that particularly caught my eye is this rather artistic view of the ‘Eastern Rover’, built by Joseph L. Thompson & Sons Ltd, taken through the shell plates of its sister ship ‘Eastern Ranger’ (TWAM ref. DS.JLT/4/PH/1/706/2). 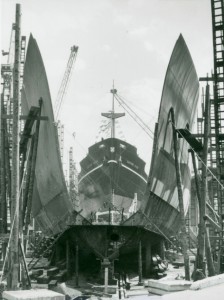 There are also wonderful images of vessels after launch as they are being towed away to the fitting out quay. A great example is this shot of the ‘British Warrior’ launched by J.L. Thompson & Sons on 22 February 1951 showing workers in the foreground and the tug boats ‘Houghton’ and ‘Grangetown’ on the River (TWAM ref. DS.JLT/4/PH/1/669/3). 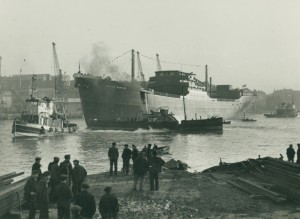 This photograph of the launch of the ‘Aghios Nicolaos’ by William Doxford & Sons Ltd (TWAM ref. DS.DOX/4/PH/1/805/3/2) is also interesting. It shows different stages of shipbuilding with two vessels under construction on the slipways, the ‘Aghios Nicolaos’ sliding down the ways and the vessel ‘Dona Evgenia’ at the fitting out quay. 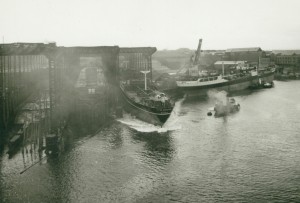 One of the great challenges in cataloguing ships photographs can be trying to put names to unidentified ships. A few weeks ago I came across several unidentified photographs of a Second World War cargo vessel during its sea trials. Apart from the images themselves, the only clue I had to work with was a date on the back of one of the images ‘22/10/43’. 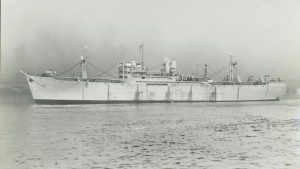 The photographs had been listed with the records of Sir James Laing & Sons but looking through the excellent photograph albums kept by the firm I couldn’t find any vessels that matched the size and style of our mystery ship. Looking desperately for clues a name jumped out at me from the riverbanks – ‘Joseph L. Thompson & Sons’. 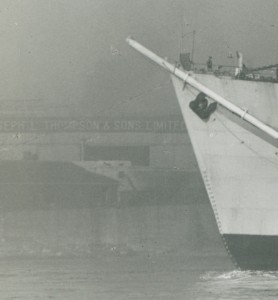 This made perfect sense since the shipyards of Laing and J.L. Thompson were very closely linked and so I decided to widen my search to the latter. Unfortunately, the Archives doesn’t have many wartime photographs of Thompsons ships so there was no easy way of identifying the vessel by direct comparison. The date on the back of the photograph now came to my rescue. Working on the assumption that the vessel was on its sea trials and therefore essentially finished, I checked the Miramar website for details of any Thompson vessels completed around October 1943. There was one very clear match – the ‘Chinese Prince’, which was launched in March 1943 and handed over in October to its owners, Prince Line.

The next step was to try to confirm my suspicions by consulting a book in our searchroom library Pride of the Princes by Norman Middlemiss. At this point there was an unexpected bit of luck. As I took the book off the library shelf I spotted the book’s author sitting right in front of me in our searchroom. After explaining the situation to him he very kindly offered to take a look at the photographs and by studying the style of the vessel immediately recognised it as a wartime cargo vessel of the Prince Line. Given the date of the images and how they’d come to us this left the ‘Chinese Prince’ as the only likely candidate.

I’d like to give a big ‘thank you’ to Norman Middlemiss for his help in confirming the probable identity of these photographs. As an archivist with responsibility for the full variety of collections that Tyne & Wear Archives holds I have to some extent to be a jack of all trades. It’s really useful to be able to tap into the specialist knowledge of our researchers and we are very fortunate that they are almost invariably approachable and generous with their time.