Segedunum Roman Fort, Baths and Museum opened its doors to the public for the first time in June 2000. In June 2020, we were set to celebrate the Fort’s 20th anniversary in the venue, but as the coronavirus pandemic had already forced the closure of all our museums and galleries, we could only mark the occasion online, the real live celebrations postponed to a later date. On Monday 27 July 2020, Segedunum once again welcomed back its visitors.

During lockdown, we have collected memories from our staff and Friends of the opening day in June 2000 which we would like to share with you here. If you were there at the opening, we’d love to hear your memories of the day. Please get in touch by emailing info@segedunumromanfort.org.uk 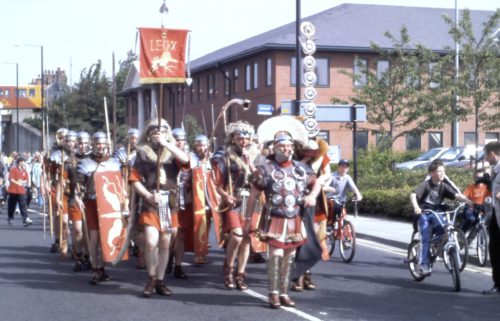 “From the reception desk, I recall seeing the re-enactors of the Ermine Street Guard impressively marching down from the Metro station and, equally impressively, a huge throng of expectant visitors flooding towards the front doors. It was a great day, exhausting but hugely rewarding, as we helped people enjoy the experience of the tower, galleries, reconstructed bath house and Roman remains. Everyone was particularly struck by the timeline video reconstruction showing the changes on the site through the Roman, coal mining and shipyard phases. The Roman Gallery was a real ‘wow factor’ too, with its fort Headquarters building design, the reconstructed cavalry barrack interior (complete with stuffed horse) and state of the art touchscreens. Segedunum had returned in triumph! That day set the tone for our summer. Visitors flocked from the community, the region and from around the world to the new attraction telling the story of the fort at the Wall’s beginning – Wallsend.”
Geoff Woodward, Museum Manager 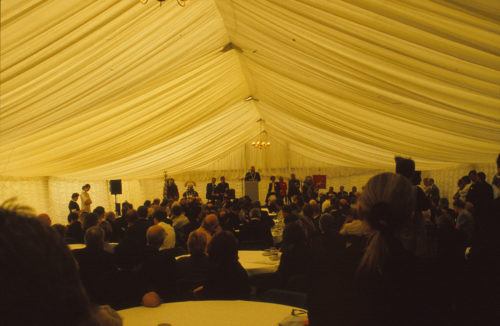 “I helped put the objects in the cases, so the days before the opening had been very busy and on the day itself I was just glad everything was in place. At the opening ceremony, I remember standing at the back of that large marquee – it was very hot in there with all those people and I was dressed in an infrequently-worn formal suit for the occasion, so I was glad that I ended up near a cooling fan. We had an interactive in the Roman gallery that required pulling on a rope; by the end of the first day it had already worn through and was in need of replacement. It had been tested beforehand, of course, but not with the level of enthusiasm of our visitors!”
Alex Croom, Keeper of Archaeology 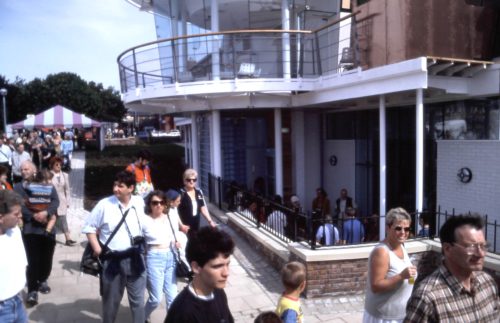 “I thoroughly enjoyed the day. The weather was pretty good and it was very well attended. I hadn’t seen Segedunum when it was finally finished, but before the other guests arrived, had my own personal tour with Graeme Stobbs, the Assistant Keeper of Archaeology, a very good guide. There were the usual speeches and a media presence and everyone was delighted by the new Museum. I think that the Tower was the main attraction, a unique feature for the area. It gives an absolutely splendid view of the river and the local area. It helps to interpret the layout of the Fort and you can see how the river makes a perfect ending to the Wall. It was a unique experience for me as I had never been to a totally new museum before it was opened and I feel very proud to have helped with the set-up and creation of this wonderful Museum.”
Liz Elliott, Office Administrator at Arbeia Roman Fort at the time 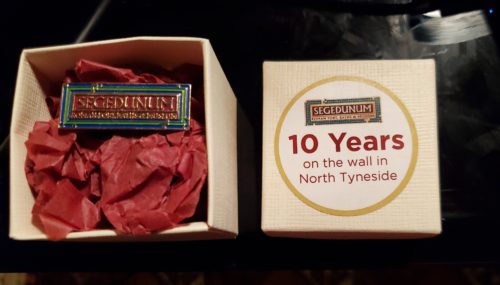 “I was involved in the 2000 development of Segedunum as the North Tyneside Council officer rep. My main memories are of the ambitious plans we had to organise a fantastic opening ceremony. The original plan was to invite the Mayor of Rome to open the museum and to have him sail up the river in a Roman Galley as he was a very well known character at the time – Franceso Rutelli. However, unsurprisingly, that came to nothing and instead we were able to get the local Italian Honorary Consul. Commemorative scrolls were given to invited guests and I can remember that colleagues in our office were enlisted to put them in envelopes the day before. I also remember my only meeting with Royalty occurred after it opened when Prince Philip visited the site in 2001. At the 10th Anniversary celebrations, a commemorative badge was presented to guests. I still have mine.”
Mike Halsey, Friend of Segedunum 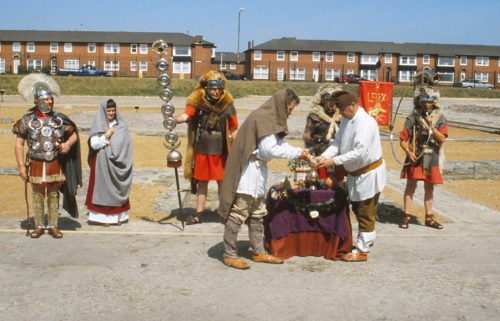 “In the car park, a massive tent had been erected, in which the formal speeches took place before the Museum was declared open. Following on from the speeches, all the visitors were invited onto the fort itself where a traditional Roman ceremony was carried out by members of a re-enactment group, flanked by the Ermine Street Guard soldiers. An offering was made to the gods using a replica Roman altar to bring good luck to the Museum. Many successful events and activities have happened over the years at the Museum and tens of thousands of visitors have passed through the gates in that time. I am sure you will agree that nobody could have predicted what the situation would be as the 20th anniversary arrived to find the much acclaimed Museum closed to visitors in the same situation as it was on 16 June 2000. The main difference being that, in 2000, everyone knew when it was opening; now we are in the lap of the gods and perhaps it is time to hold another offering to the gods like the one that was performed on 17 June 2000 at the opening ceremony.”
Ken Hutchinson, Chair of the Friends of Segedunum

If you’d like to know more about the Friends, please email secretary.segedunumfriends@gmail.com

As a charity, Tyne & Wear Archives & Museums rely on donations to help us continue  providing our services to the public, and our closure, whilst necessary, has significantly impacted our income. Please, if you are able, help us through this difficult period by donating by text today. Text TWAM 3 to give £3, TWAM 5 to give £5 or TWAM 10 to give £10 to 70085. Texts cost your donation plus one standard message rate.  Thank you.