The exhibition of paintings and sketchbooks by Ralph Hedley is on at the Shipley Art Gallery, Gateshead, but there’s still more Hedley paintings on show elsewhere in the local area.

I took a Metro to South Shields to see the Museum and Art Gallery where there’s three Ralph Hedley paintings on show – each with a story to tell.

Ralph Hedley’s Invention of the lifeboat, Willie Wouldhave, South Shields, 1789 is on display on the ground floor of South Shields Museum and Art Gallery. 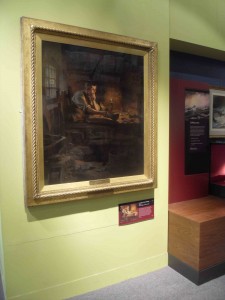 Invention of the lifeboat in Newcastle and at the Royal Academy, London, in 1897. Then it was bought by a group of enthusiasts in South Shields and presented it to the town council at a 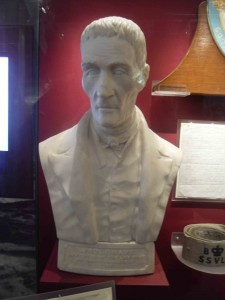 ceremony in August 1898 to mark the re-opening of the town library (now the museum) after it has been closed for two years for building work.

Next to the painting in today’s museum display are several linked exhibits, including the model lifeboat Hedley depicted in his picture, and a marble bust of William Wouldhave. In the bust Wouldhave looks a lot older than the fresh-faced handsome man shown in Hedley’s painting.

William Wouldhave had a competitor who claimed that he invented the lifeboat – Henry Greathead, also of South Shields. Both of them submitted designs for a competition to design a rescue boat, and ideas from both of them were used in a final design.

Down Ocean Road from the museum is a monument of 1890. It commemorates the work of both William Wouldhave and Henry Greathead, and celebrated the 1887 Golden Jubilee of Queen Victoria. Next to the monument is the lifeboat Tyne in an elegant cast-iron pavilion. 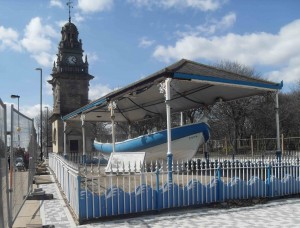 Tucked away on the second floor is Ralph Hedley’s portrait of Ralph Cruickshanks, painted in 1903. 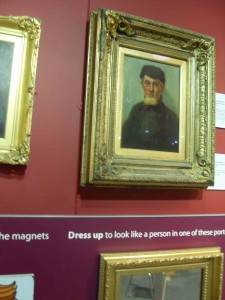 Ralph Cruickshanks worked on the steam ferries between North and South Shields for 43 years.  He retired in 1899, and worked as a picture framer and gilder in South Shields until his death in 1897.

Cruickshanks was known for having taken in the Border Collie, ‘Wandering Willie’.

In 1873, a shepherd was driving a flock of sheep from the Cheviot Hills in Northumberland to the Cleveland hills. At the ferry between North Shields and South Shields, he thought he was missing a sheep and sent his dog to look for it. After the dog had gone he counted his sheep again and found they were all there, so he continued his journey, and left the dog behind. 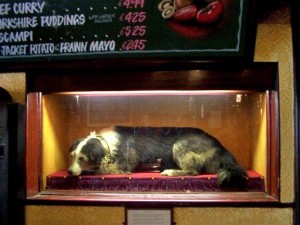 The dog wandered around North and South Shields and crossed and re-crossed the Tyne on the ferry, looking for its master. The dog searched for years and earned the name ‘Wandering Willie’,. Eventually, when it was old and ill, Ralph Cruickshanks took it in.

When the dog died in the early 1880s it was preserved and, if you’d like to go and say ‘hello’, Wandering Willie is now to be found in the bar of the Turk’s Head Hotel, Front Street, Tynemouth. 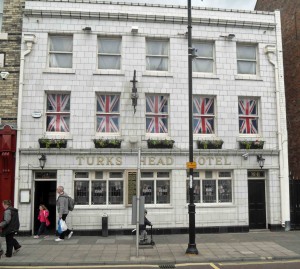 If you want more of the story of Wandering Willie , it’s in the Monthly chronicle of North-country lore and legend, May 1889, vol.3 no.27, p.233-4, ‘Wandering Willie’ by Thomas Hudson – you can find it on line at http://archive.org/stream/monthlychronicle03jubiuoft#page/232/mode/2up 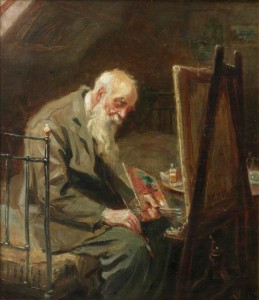 Ralph Hedley’s ‘Ars Longa, vita brevis’ hangs in South Shields Museum & Art Gallery, in the same room as his portrait of Ralph Cruickshanks. The title translates from Latin as ‘art is long, life is short’, and, the picture shows a weary old artist, sitting on his bed, and trying to muster the energy to paint.

Ralph Hedley painted this picture with bold brushstrokes, and it is clearly a sketch for a larger painting. Further research is needed, but this larger version of ‘Ars Longa, vita brevis’ may be the painting of 1900 by Hedley that was sold in Munich in 2012. It had the title Des müden Künstlers Abend, which translates as The weary artist evening), and was dated 1900.

I’ve been working with Ralph Hedley’s great-granddaughter, on a new website with pictures of Hedley’s paintings, and further information – check it out at http://ralphhedleyarchive.com/index.html