I’m delighted to report that work is going very well on the Sunderland Shipbuilding archives project. Colin and I have nearly finished cataloguing the very extensive records of Bartram & Sons Ltd and hope to make the completed catalogue available to researchers in the near future.

Many of the firm’s ships plans have been unavailable to researchers since they were deposited here in the 1970s. Colin has already catalogued over 800 of these and during the course of this work he’s come across a number of very interesting plans, some of which have featured in previous blogs. Of particular interest this month are the plans of the ‘Mimis N. Papalios’, the first SD14 ship ever launched (the name SD14 stands for ‘Shelter Deck – 14,000 tons deadweight’).

Bartrams built the ‘Mimis N. Papalios’ and her sister ship the ‘George N. Papalios’ under licence from the nearby Sunderland shipyard of Austin & Pickersgill Ltd, who developed the SD14 design in the mid-1960s. It was designed as a replacement for the surviving ‘Liberty ships’, built by American yards during the Second World War. By the 1960s these vessels were fast approaching the end of their working lives.

The Bartram & Sons collection includes over twenty plans of the ‘Mimis N. Papalios’, including a profile and decks plan, an accommodation plan and an unusual survival – a grain loading plan.

While Colin has been busy with ships plans, I’ve been cataloguing the other Bartrams operational records. These include a large quantity of hull and machinery specifications dating from the late 1890s to the mid 1970s and over 100 ships cost books covering the period 1939-1978. Also of interest is a large series of ships files dating from 1937 to 1978. These include many correspondence files between Bartrams and the shipowners they built for. As well as letters these files often include notes of discussions held and provide a fascinating insight into the very important relationship between the shipyard and its customers.

I’ve also been cataloguing a small but interesting set of publicity and marketing records for Bartrams. These include publicity articles about the firm’s modernisation work in the 1950s and 1960s, press cuttings and articles about the vessels built by the firm and a small number of photographs of the shipyard. Among the photographs are a number that seem to have been taken at the firm’s annual sports days. These stirred a few happy personal memories of school sports days but more importantly reflect the social side of the shipyard’s activities. I’ve included several images in this blog and if anyone recognises themselves or attended one of these sports days and could tell us more about them then I would be delighted to hear from you. 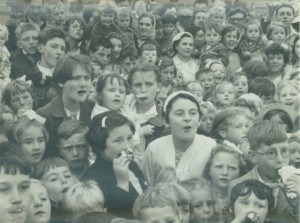 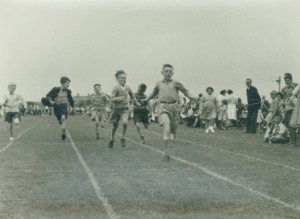 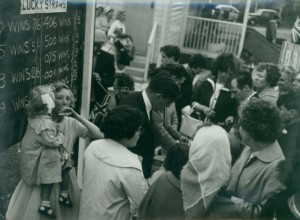 One very noticeable absence in the Bartrams collection is a real lack of ships photographs. The firm would have arranged for thousands of these to be taken but only a handful were deposited with us by the shipyard. However, Bartrams was one of many shipbuilders to use the photographic company Turners (Photography) Ltd and fortunately the Archives holds a very large collection of Turners photographic negatives, dating back to the late 1940s. This collection was featured in a recent blog.

If you’re looking for an image of a vessel built by Bartrams (or another North East shipbuilder) then it might well be worth checking the Turners collection. For example, here’s an aerial shot of the ‘North Devon’, taken during sea trials in May 1958. 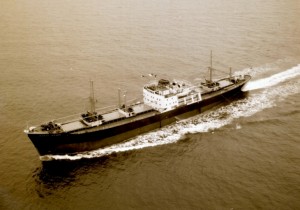 Bartram & Sons were very proud of the fact that the vessel was launched only 11½ weeks after the keel was laid. One of our volunteers is currently indexing the ships photographs in the Turners collection and when that work is complete it will dramatically improve access to it.

44 Responses to Progress update from the Sunderland Shipbuilding archives project