Preparing a Japanese Norimono for exhibition at the Laing Art Gallery

Here’s a movie which records Dawn Bradshaw and Christina Stephenson, two of TWAM’s Conservators, preparing this beautifully crafted object (TWCMS : J1509) for an exhibition which was held at the Laing Art Gallery (Japanese Wave, 1st May 2010 to 5 September 2010).

This is a special type of ceremonial palanquin known as a norimono, used for transporting ‘daimyo’, a ‘lord’, and individual family members on special occasions such as a wedding. The lacquer decoration is in an official style which came into being during the second half of the seventeenth-century. This norimono may have belonged to larger set of similarly decorated items forming part of a wedding dowry.

There are many different types of palanquin or ‘kago’. The most elaborately decorated carriages were only used by nobles and high officials, while lower ranking members of the upper classes would travel in simpler versions. The type of kago, like the strict dress codes imposed on individuals in Edo-period Japan, served to enforce the class system.

Curator of the Japanese Wave exhibition, Lesley Richardson selected the norimono for display as an illustration of this aspect of Edo-period culture and to relate items depicted in the woodblock prints, also on display, to real objects.

A more basic version of this palanquin can be seen in some of Hiroshige’s famous ukiyo-e series ‘The Fifty-Three Stations on the Tokaido Highway’, showing daimyo processions known as sankin kotai. The very back of the pole of an elaborate palanquin similar to the one on display can also be seen in Toyokuni’s print ‘The Peak of Mount Fuji and a Procession of Beauties’. 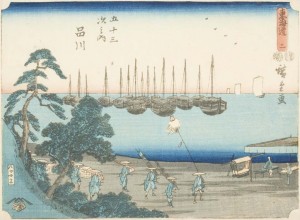 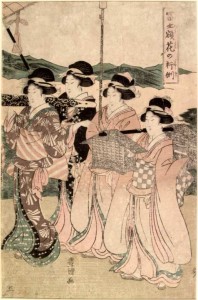 This norimono, now having been on public display for five months and been enjoyed by many visitors to the Laing Art Gallery, is now back in TWAM’s environmentally controlled stores. 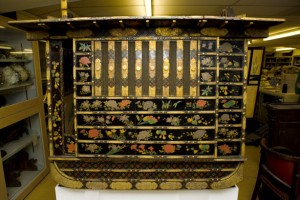 Part of the Norimono before treatment 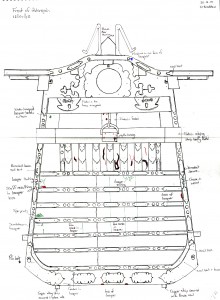 Conservator's notes in advance of treatment 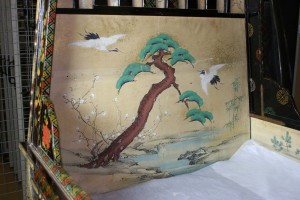 Inside the Norimono after tear repair by paper conservator

The conservation movie was made by TWAM Photographer Les Golding and Dawn Bradshaw.