Pilgrim Street and the Newe House

The other day I was stood at the bus stop in Pilgrim Street, in front of the old Odeon, when the Number 1 bus to Slatyford suddenly transformed into a hay wain pulled by four oxen and two horses…

Well, in my head it did.  I was thinking of this wonderful view of that part of Newcastle, taken in about 1700 and currently in storage at the Laing Art Gallery:-  [click pictures for full-size images] 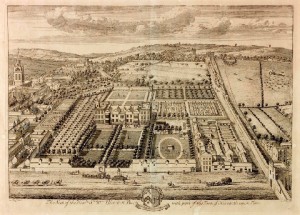 The artist has produced a bird’s eye view (from what would now be the roof of the old Odeon) looking out over Pilgrim Street and the Newe House towards Westgate Hill on the horizon.

The hay wain has probably just entered the town through Pilgrim Street Gate in the bottom right corner (on the site of the modern junction with Northumberland Street and Blackett Street) and is passing what’s now the Tyneside Cinema.

Further along the street, a train of loaded packhorses heading out of town is about to pass a coach-and-six at the gates of the Newe House.

Today, the packhorses would be passing the police station and the coach would be crossing Market Street.

The Newe House itself was an Elizabethan mansion built in 1580.  At one point during the Civil War, Charles I was held there under house arrest (well, when he wasn’t out playing golf on the Shield Field).  By 1700 it had acquired a couple of new wings and extensive formal gardens. 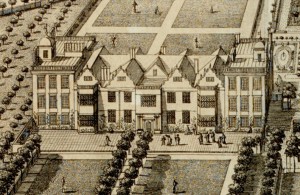 The house was demolished in the 1830s and today Lloyds TSB occupies part of the site.  Its tree-lined driveway lies buried under Market Street.

At the right of the picture, the town wall can be seen stretching from Pilgrim Street Gate to the New Gate and St Andrew’s Church in the distance.  Newcastle’s walls were still complete at this time and would be repaired one last time in 1745 in anticipation of a Jacobite attack.  This section of the wall gave its alignment to the modern Blackett Street. 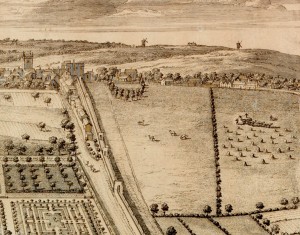 The four horses in the field just outside the wall near the New Gate would today be galloping around Old Eldon Square, but the farm hands piling up the hay wain in the adjacent field would be lost under Boots and Waitrose in the shopping centre.

Pretty much everything in this view, town and country, was gone by the 1830s, swept away by Grainger and Dobson’s town of stone.

One Response to Pilgrim Street and the Newe House