Photographic collection gets its own room in the Archive Stores

A recent move of material over to the Northern Region Film & Television Archive at Teesside University www.nrfta.org.uk meant that a small room became vacant in the archive stores at Discovery Museum.

The Archivists and the Conservation Officers agreed that this was the right place to manage the environment required to store photographic material. A grant from DCMS enabled us to purchase and install a dehumidifier and chiller unit which will help to maintain the right environmental conditions.

I asked Matt, one of the Conservators, to explain, “The majority of the negatives are supported by a cellulose acetate layer which is prone to self destruction. As they age they give off acetic acid vapour. This causes the plastic to shrink and crumble distorting the image. Known as vinegar syndrome the chemical degradation can only be slowed down by a reduction in temperature. If the humidity is too high the silver in the photographic gelatine layer can also corrode and migrate through to the surface of the negative where it causes a mirror like effect damaging the image further”.

Once the conditions were right the move could take place. Last week Dawn (Conservation Officer) & Peter (General Assistant) moved about 200 boxes of photographic negatives into their new environmentally conditioned home. 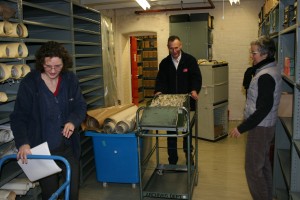 Dawn and Peter, the move masterminds, show Mel how it’s done. The new store is looking good behind the red door. 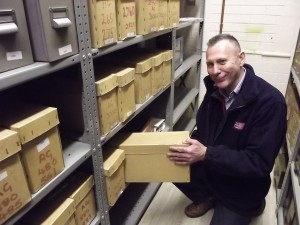 So why invest in the Turner Collection?

Turners was established in Newcastle upon Tyne in the early 1900s. It was originally a chemists shop but in 1938 become a photographic dealer.

Turners went on to become a prominent photographic and video production company in the North East of England. They had 3 shops in Newcastle city centre, in Pink Lane, Blackett Street and Eldon Square. The business closed in the 1990s.

From the 1950s the business was largely involved in film-making and made many commissioned films for local businesses and organisations including routine filming of ship launches on the Tyne.

As well as these films, Turners’ work is represented in the archives of a number of companies and local authorities held at Tyne & Wear Archives, including Newcastle City Council, Mott, Hay and Anderson and Swan Hunter Shipbuilding.

Access to the photographic negatives is provided through a series of day books that record each job undertaken by the company.  Volunteers are currently working on compiling an index to these volumes. This will make the collection more accessible.

Over the years, Turners’ photographers took thousands of photographs, a small sample of which can be seen on our Flickr stream.