The secrets of ice cream date back to some of the world’s earliest civilisations. Persians poured grape juice over snow, Emperor Nero mixed snow with fruit and honey, and frozen milk and rice were consumed in China. By the 17th century ice cream had reached English shores. King Charles I was served the dessert at a banquet, he was so taken that he attempted to censor the French chef and keep the recipe a secret. But the secret got out and the demand for sweet ices spread. (www.ice-cream.org)

The ice cream industry as we know it developed in Little Italys across Britain, with Italian immigrants introducing the dessert to British streets. The key to their success was readily available ice, which in the early 1800s was imported from Canada, America and Norway. Italian families worked together at home to produce ice cream which they sold from push-carts and barrows. The industry became so popular that families sent for reinforcements, and Italian men and boys travelled to Britain to take up positions in the mushrooming businesses. (www.ancoatslittleitaly.com)

As economic conditions in Italy deteriorated, numbers of migrants grew and British cities like Newcastle saw networks of tight knitted communities forming, often centred around the local Catholic Church. Working and living conditions were often poor, they were badly paid, exploited and lived in cramped, unhygienic buildings. In Newcastle, the Italian community lived in the area around Carliol Square and attended St Andrew’s Catholic Church on Worsick Street.

The street vendor served ice cream in small dishes made from thick, cheap glass.  They had heavy bottoms and the bowl was almost full, leaving only a shallow dip onto which ice cream could be scooped. The thickness of the glass created an impression that the bowl was full, but in reality, and to the customer’s disappointment, there was just a lick! The glass came in three sizes; the ha’penny lick, the penny lick and the tu’penny lick. The penny lick was the most popular.  (Walker, 1991)

Once the customer had licked the glass clean they handed it back to be reused. There were a lack of washing facilities so sanitary conditions were impossible to maintain. An 1879 medical report ‘was quick to blame cholera outbreaks on poisonous Italian ice-cream and in particular on the filthy glasses from which it was licked’ (Winder,2004). And in 1899 the glasses were banned from London altogether and blamed for spreading tuberculosis. 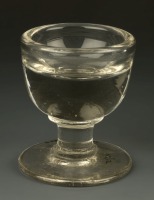 These penny licks will feature in the Discovery Museums new gallery, Destination Tyneside, which looks at migration in Tyneside from the 1800s to the present day. The glasses will form part of a story describing the journey and lives of a local Italian family called the Marcantonios, who first opened an ice cream business, Mark Toneys, in 1902. Decedents of Antonio and Angela Marcantonio continue to sell the family ice cream in Newcastle today.

This led to the creation of the ice cream cone, which has been called the saviour of the industry. The cone, how it was created and when is a debate in itself. However it is generally believed that a Syrian pastry maker at an American World Fair in 1904, rolled a Zalabia pastry for an ice cream vendor running out of dishes. (Liberman, 2011)

Wherever this frozen luxury originates it is evident that ice cream has been the lifeblood of Italian immigration, not only in Britain but across much of the world. Today we take ice cream for granted. Improvements in technology have allowed us to keep cartons in our freezers at home. With a readily available cheap product, it became necessary for the traditional industry to adapt and evolve, something many family businesses have struggled to do. That being said, there is still one place where you will always find an ice cream, on a sunny day at the sea side!