Pebbles on the beaches of Northumberland

Hi, my name is Sylvia, I’m the geologist at the Great North Museum: Hancock.  Now that the museum is closed for the foreseeable future and our extensive collection of rocks, minerals and fossils is not accessible, I looked to local beach pebbles for a little geological inspiration.

The geology of Northumberland is very varied; it includes the Whin Sill crags at Housesteads that Hadrian’s Wall sits on, the granite and volcanic rocks of the Cheviot Hills, fossiliferous Carboniferous limestones, Coal Measures sandstones, and further south at Cullercoats the fossil fish-rich Late Permian Marl Slate.  Here are descriptions of some of the pebbles that are commonly found on local beaches. 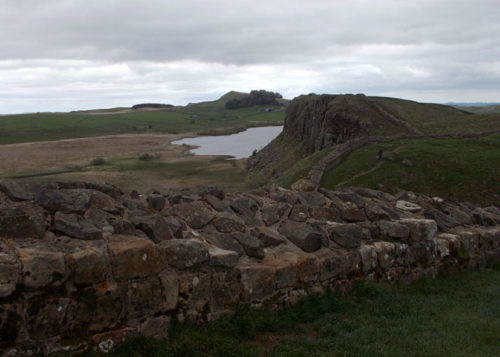 Hadrian’s Wall on crags of Whin Sill near Housesteads, Northumberland.

The Whin Sill is a large sheet-like saucer shaped igneous intrusion that sits below much of north east England.  It is chiefly composed of a hard dark grey/black rock known as quartz dolerite that is used as road stone and extracted at several sites, including Barrasford Quarry near Hexham.  Beach pebbles of this rock are typically smooth and well-rounded, and sometimes have a ‘spotted’ appearance – the spots represent gas bubbles that formed within the rock while it was still molten and have subsequently filled-up with minerals.  The pebbles feel relatively heavy for their size, and sometimes have a slightly sparkly appearance resulting from the small angular crystals that they are composed of catching the light, a feature most easily observed when the sun is shining!  They are commonly found on beaches near Dunstanburgh and Howick. 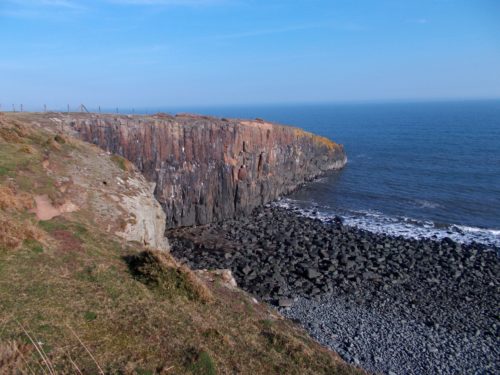 The Whin Sill cliffs of Cullernose Point near Craster, Northumberland. 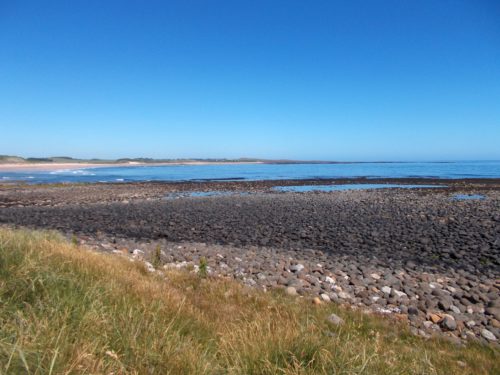 Pebbles of quartz dolerite on the beach near Dunstanburgh, Northumberland. 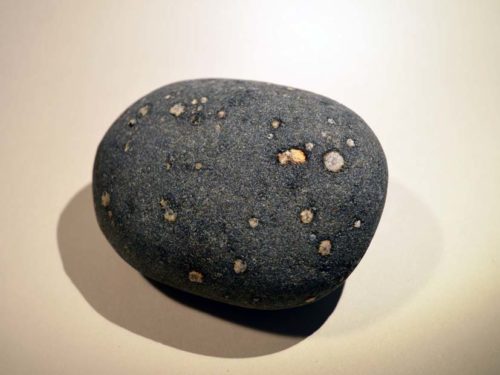 The black limestones of north Northumberland formed in a warm sea when Northern England was much closer to the equator than it is today. Dating from the Carboniferous period, this rock is approximately 350 million years old; it is often packed with marine fossils, including brachiopod shells, corals and crinoids.  Crinoid fossils (also known as ‘sea lilies’) commonly occur in the limestone, showing up clearly as small white disc or rod-shaped objects. Depending on how the crinoid fossils sit within a pebble, they can resemble rows of teeth. Loose crinoids are sometimes found in beach sand, for example on Lindisfarne; they are known locally as St. Cuthbert’s beads – some crinoids have a hole through the middle and have been used to make rosaries.

The dark colour of the limestone can lead to confusion with the similarly coloured quartz dolerite. Differences in texture can be useful identification aids: compared to the crystalline Whin Sill, the black limestones have a much finer texture, and a duller, more muddy appearance. 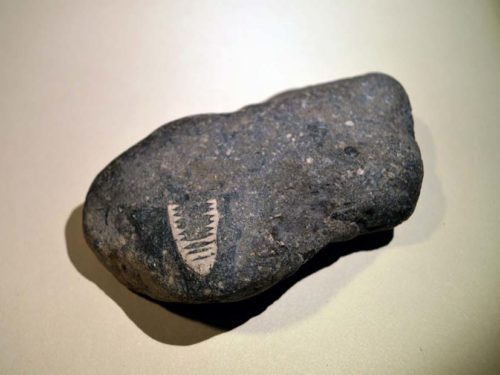 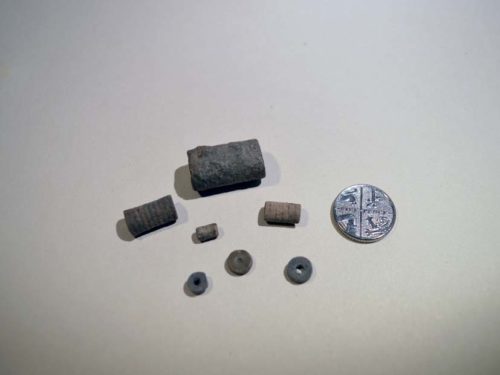 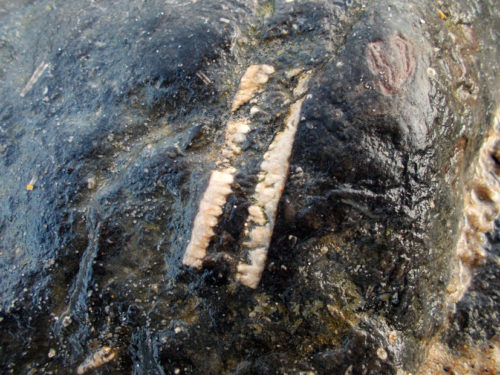 Crinoid ‘stem’ preserved in limestone, on the beach near Bamburgh, Northumberland.

Septarian nodules are found in the local Carboniferous strata.  Ranging in size from a few millimetres upward, they are also known as tortoise or turtle stones because their overall appearance has been likened to the shells of these reptiles.  When complete, they are typically oval or circular in outline.  Internally, septarian nodules exhibit a network of radiating cracks filled with calcite or quartz; seen on the beach, their unusual structure can produce a striking appearance.  Iron-rich sandstones and finer-grained sedimentary rocks are typically described as ironstone and have a distinctive brown or more vivid orange or ochre colour. 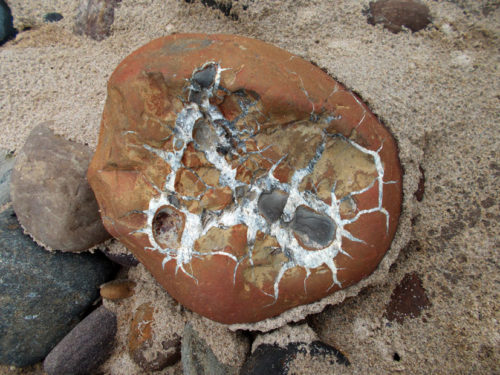 Septarian nodule pebble, on the beach near Cresswell, Northumberland

The mineral Apatite is composed largely of calcium phosphate, just like our teeth.  Translucent green and blue-green pebbles of this mineral can be found among the seaweed and sand beside the St. Mary’s Island causeway.  These pebbles were part of the cargo of the Gothenburg City, a ship that ran aground on the rocks here. It may take a while to ‘get your eye in’ and spot the apatite among the beach pebbles, but some pieces are so clear that they can be confused with green sea glass and have been used to make jewellery. 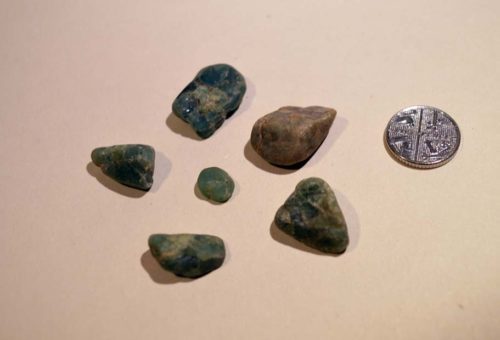 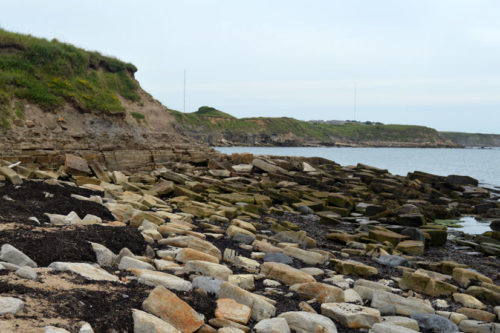 One of the most common local beach pebbles is quartz, a relatively hard mineral that is usually the main constituent of beach sand. Quartz pebbles are typically opaque to translucent, coloured yellow, brown, orange or white, and stand out from the sand when wet. 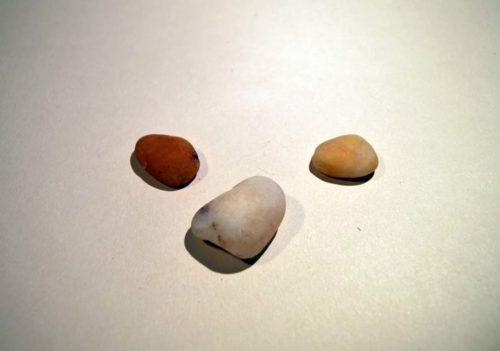 This is just a small selection of the pebbles that can be found locally. If you find any pebbles that you would like more information about, please get in touch with us at the Great North Museum: Hancock, and we will endeavour to help.