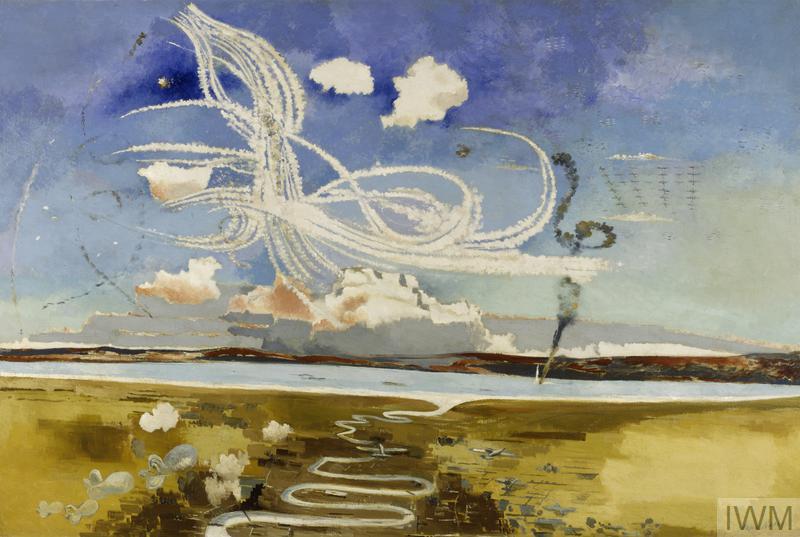 This epic painting, The Battle of Britain, is one of Paul Nash’s best-known compositions. Over several months in the summer and autumn of 1940, the RAF fought the Battle of Britain against the Luftwaffe in the skies above the south coast of England. In Nash’s massive picture, the white contrails of the British planes describe elegant arcs against the lovely blue sky. These are flanked by trails of black smoke from downed planes. It’s only after a while that we notice the packs of approaching aircraft, tiny in the sky on the right. From a great height, we look down on barrage balloons and planes, with a mighty river far below. By suppressing detail in the landscape, Nash has given it a quality of timelessness, expressing his deep feeling for Britain’s countryside and ancient heritage. (Nash’s high viewpoint was imaginary, as his severe asthma meant that he was unable to go up in a plane.)

The Laing’s current Paul Nash exhibition, touring from Tate, is a unique opportunity to see Nash’s masterpiece in the context of paintings from the whole of his career. This is the only exhibition venue to include the picture, as it became available for loan only just before our showing of the exhibition. 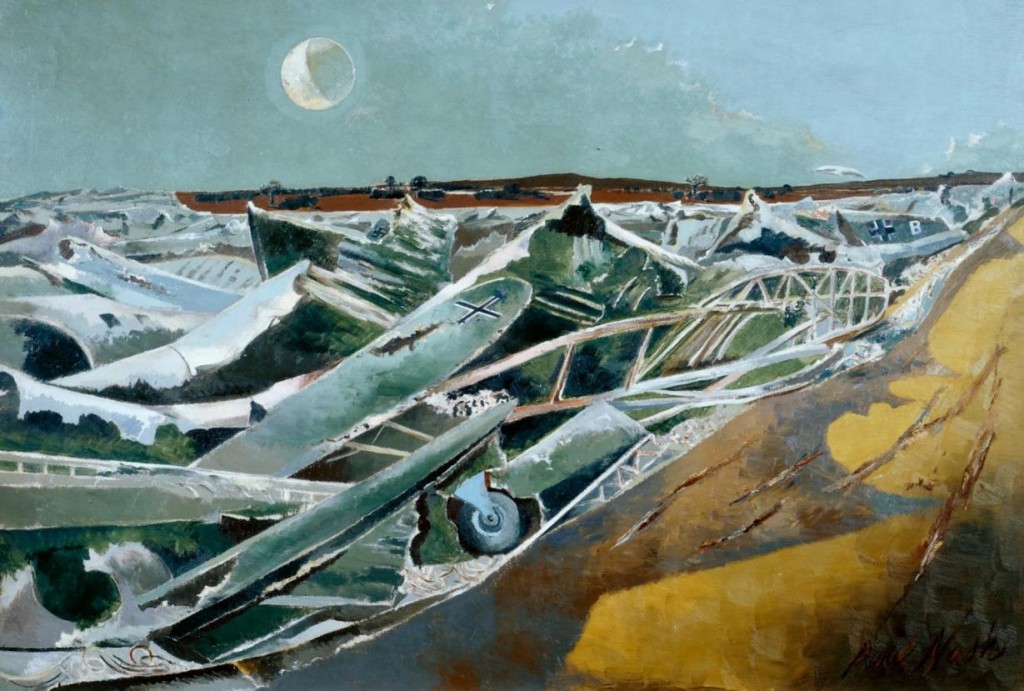 The Battle of Britain is on show beside Totes Meer (Dead Sea), another large painting from the Second World War. Nash had been fascinated by aeroplanes and flight since childhood, and he was commissioned by the War Artists Advisory Commission to paint a series of large pictures on the theme of aerial combat. Totes Meer was inspired by the huge dump of crashed planes awaiting recycling at Cowley, near Oxford, where Nash was living at this time. A third picture from this period, The Battle of Germany, a more abstract composition, is also in the exhibition. The trio make a fascinating comparison of different strands in Nash’s artistic range.

During the war, attacks from the air became an increasing threat. Nash described how he scanned the skies for parachute raids: “I strained my eyes always to see that dreadful miracle of the sky blossoming with these floating flowers.” This idea was one element behind his picture Flight of the Magnolia, painted in 1944, in the later stages of the war. In a complex piece of imagery, Nash added features inspired by seeing a magnolia blossom and an unusual cloud during a visit to a friend. The picture was linked to Nash’s own feelings of mortality. He went on to say, “death, I believe, is the only solution to this problem of how to be able to fly”. Nash was in very poor health at the time, and he died two years later from heart failure resulting from his severe asthma.

A previous blog looks at Paul Nash’s experiences as an Official War Artist in the First World War. A second blog, Paul Nash, a Romantic Surrealist explores the important surrealist strand of his art.

The Paul Nash Exhibition Guidebook £24.99 is available from the Laing Art Gallery shop and online.

The exhibition is organised by Tate Britain in association with the Laing Art Gallery and the Sainsbury Centre for Visual Arts.

One Response to Paul Nash: Art of the Second World War