Out of Chaos – art that makes you think 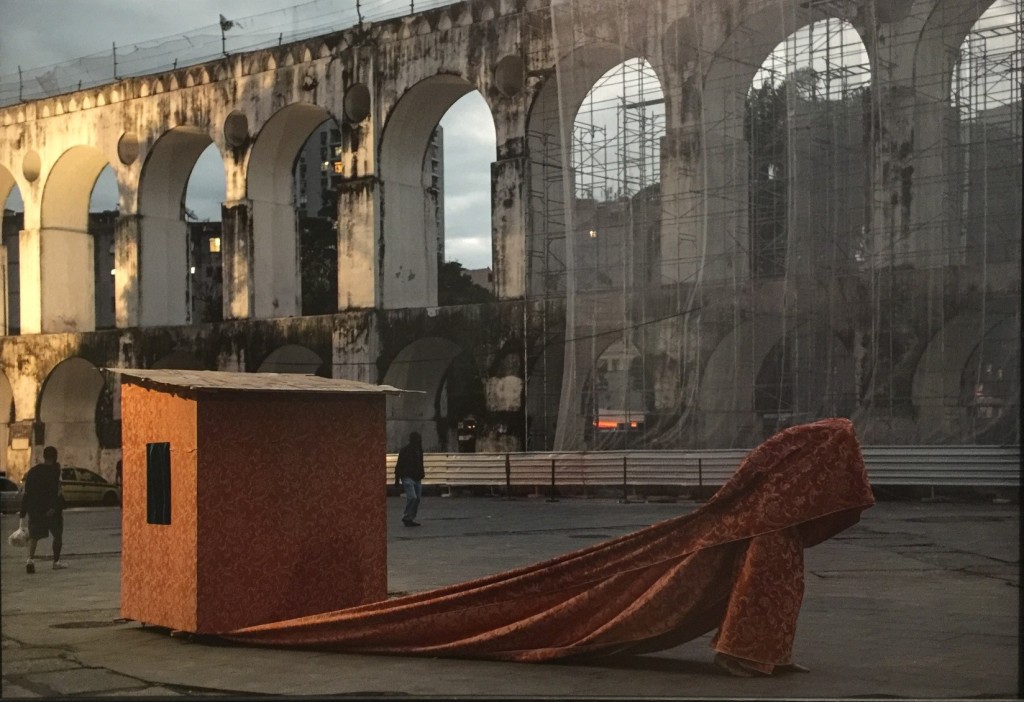 One of the important things in our lives is our idea of who we are and where we belong. But our settled sense of identity can be uncomfortably challenged by new situations and places. Güler Ates’ photograph dramatically conveys the feeling of a surreal collision of two worlds. The artwork records her performance piece, titled Home (2014, © the artist), which she presented in in the Brazilian city of Rio de Janeiro. She drags a small hut, an emblem of the early life that shapes us as a person, but the fabric draping her figure obscures her individuality. The action takes place in front of massive railway arches that add to the sculptural qualities of the forms in the scene while also bringing to mind the long journeys that migrants and refugees make, sometimes knowing nothing of the place they might end up. Güler Ates was born in in Eastern Turkey and has been living and working in London for the past 17 years. Her photograph is one of the contemporary artworks in the exhibition Out of Chaos, currently on display at the Laing Art Gallery. The exhibition is full of powerful and thought-provoking art, both historical and modern. 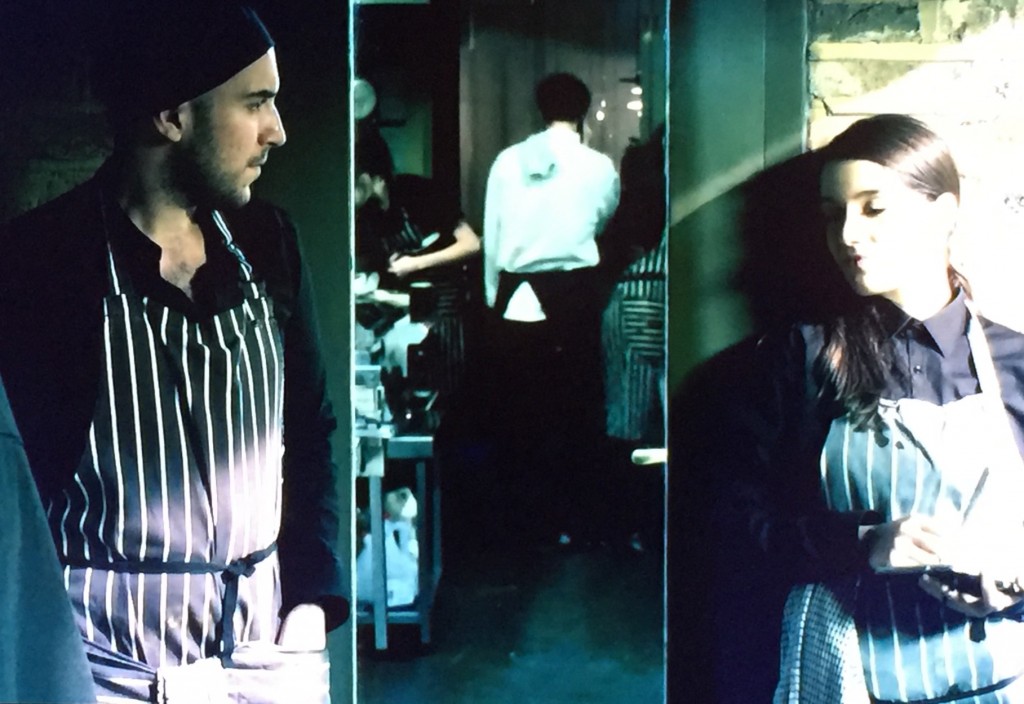 The movement of migrants and refugees across Europe is currently headlining many of our news broadcasts. Edwin Mingard has addressed the personal story of an individual migrant in his fictionalised film Break (2015, Ben Uri Collection) set in a London restaurant (the photo shows a snapshot from the video on display in the exhibition). In the film, the character Yousef is shown on the point of physical collapse as he struggles to make a living in London. At the same time, Yousef attempts to keep life going by phone with his family in Egypt. Film-maker Edwin Mingard is a Fellow of Teesside University’s Digital Cities programme (and also recently made a film of Byker Metro). 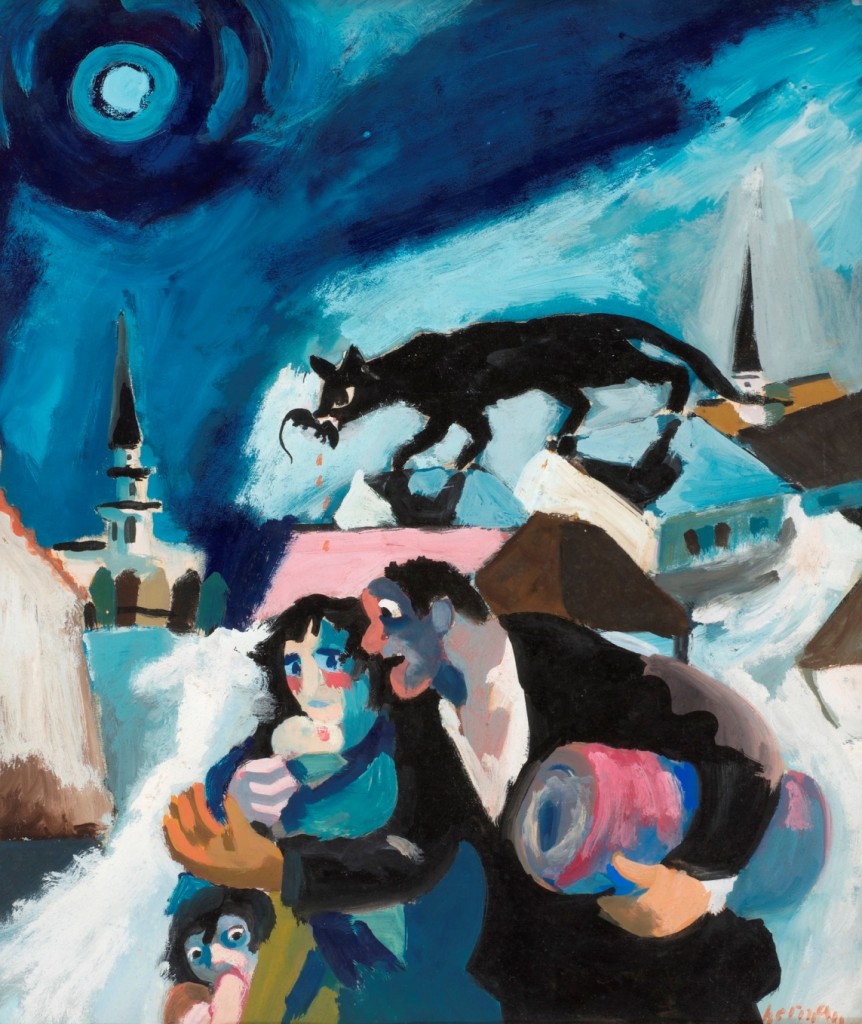 Many people have felt forced from their homes to escape poverty. Others have fled desperate danger. The cat gripping a mouse in its jaws in Josef Herman’s painting Refugees provides a vivid image of the plight of people fleeing persecution the world over. The picture was painted during the Second World War after the artist fled Poland, eventually arriving in Glasgow in 1941. Tragically, Herman subsequently learnt that all his family had been killed in the Warsaw Ghetto. The beautiful blue colour that Herman used in Refugees (about 1941, Ben Uri Collection, © the artist’s family) was a hymn to the night skies over his home city of Warsaw. In his new country, Herman’s art added energy to the development of Scottish Colourist painting. 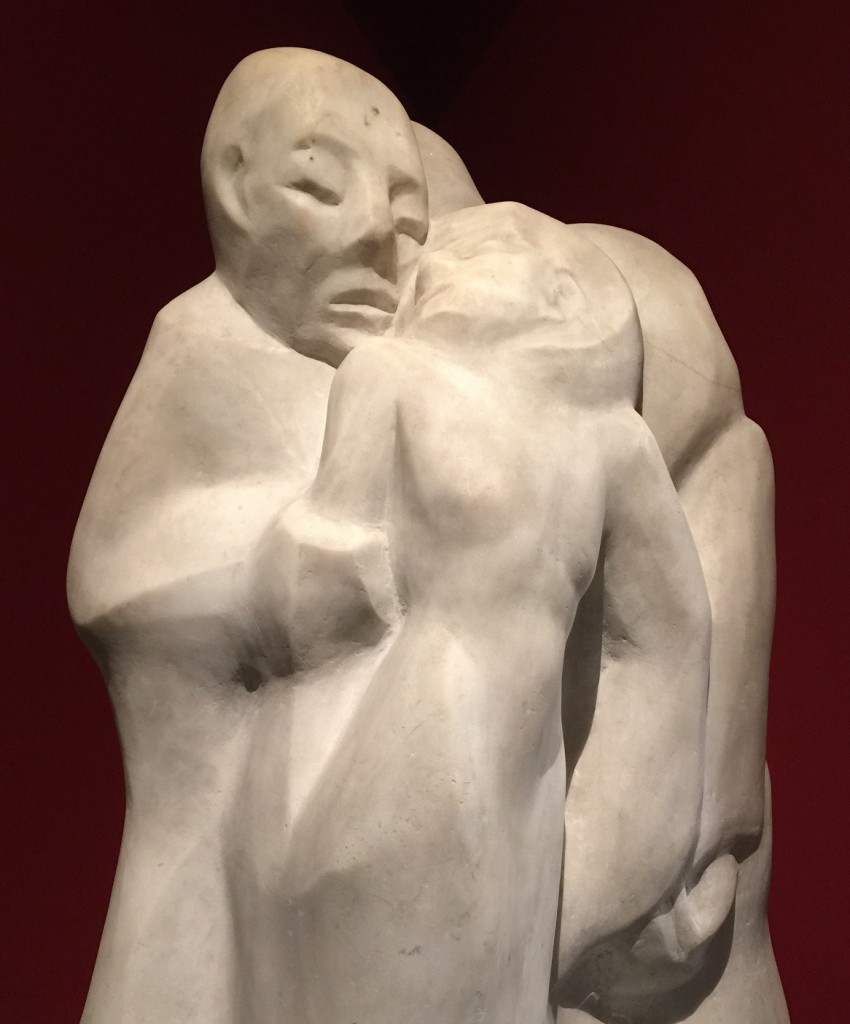 Like Josef Herman, Edith Kiss’s life was turned upside down by the Second World War. Her career as a sculptor in Hungary came to a halt when, as a Jew, she was arrested by the Nazis in 1944, and sent to Ravensbrück concentration camp in Germany. After a period as a forced labourer, she made a desperate escape from guards during a march. She was eventually able to make her way back to Hungary. Though traumatised by her experiences, she re-established her career, and her untitled marble sculpture (Ben Uri collection, © the artist’s family) is on show in the exhibition. 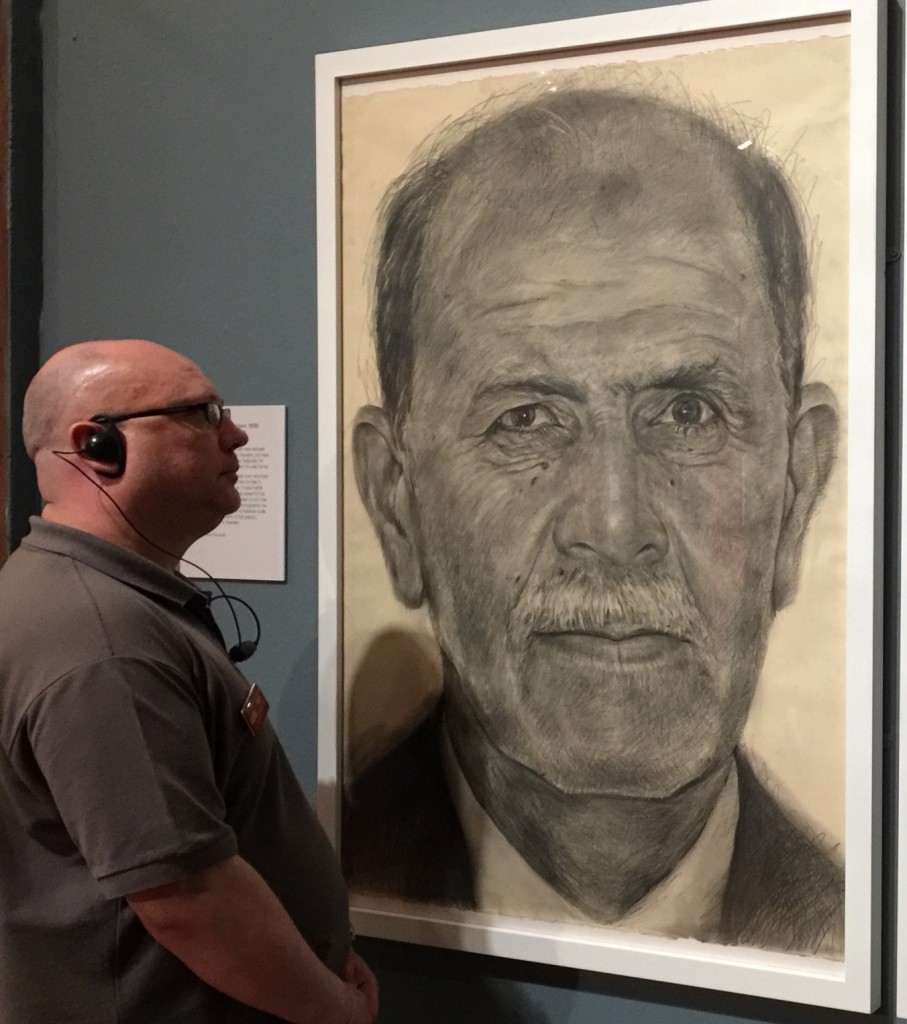 More recent conflict caused artist Behjat Omer Abdulla to flee Kurdistan in 1997. The two massive drawings in the exhibition depict Kurdish asylum seekers and are from the artist’s In Limbo series of portraits of people who have fled a danger in a variety of places, including Syria and Zimbabwe. These pictures raise the issue of the impossibility of capturing a person’s identity in an ID-photo. Yet, says the artist, ‘The desire to reduce a person to only their photographic image is widespread.’ Our Customer Services Assistant Mark is pictured admiring the detail in the drawing In Limbo: Hajy Khalil (2010, © the artist/ Counterpoint Arts). Sadly, a note on the back of this portrait records that the elderly man was refused asylum in Sweden and was subsequently killed on his return to Iraq.

The Out of Chaos exhibition is full of big themes and interesting narratives, resulting in a fascinating exhibition with impressive artwork. As well as tours, there is a lively programme of talks for the exhibition. These take place in the Laing Function Room, 12.30-1.15pm. They can be booked in the Gallery or online.

Exile and the Jewish imagination: understanding Jewish cultural displacement and migration in the twentieth century. Tuesday 22 November, £4, students free. Ian Biddle (Senior Lecturer in Music and Cultural Theory, Newcastle University) discusses the special Jewish understanding of ‘exile’ and shows how this helps us understand the works being shown in the Out of Chaos exhibition.

The Psyche, the Artist, and Aesthetics as Spaces of Refuge. Thursday 26 January, £4, students free. An illuminating talk by Dr Dariusz Gafijczuk, (Lecturer in Sociology, Newcastle University) explores Sigmund Freud’s concept of art as a space of refuge as it relates to artworks in the Out of Chaos exhibition.