Nothing But Blue Skies From Now ON! (removal of some very Yellow varnish)

This year as a way of coping with a sharp reduction in Museum funding we are all being asked to find new ways of raising funds. This means that for the first time (in my memory at least) our Conservation Department is opening up its services to the public. Even before it has been announced on the web site we have had several enquires and I currently have 6 private paintings in the studio to be conserved so there is always plenty to do in the four days a week I can get into the studio. The painting I am working on at the moment is one of four maritime paintings for the Port of Tyne which have proved very satisfactory to work on as the varnish has been so discoloured they look like different paintings when they are clean! 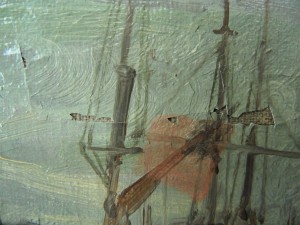 this is a close up of the flaking paint problem. I had to inject adhessive under the paint and gently iron it back down with a small heated spatular

The first one was quite damaged and the paint was flaking off in several places. it didn’t even look that dirty or discoloured to me at first glance. 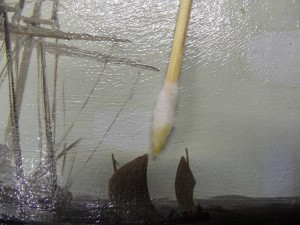 Varnish cleaning tests. look how yellow the swab is with such a smal area of varnish removed. I always test the solvents in several places espesially over the rigging if there is any just incase the lines have been painted over the varnish or are particularly soluble

After I had consolidated the flaking areas I did a few cleaning tests to see if it would clean and with what. I wasn’t so surprised to find there was quite a layer of grey dirt on it (after all I’d already noted what looked like a few coffee splash marks on it) But when I tested a small area to see whether it would be worth removing the varnish I got quite a shock at the difference it made suddenly I had a blue sky instead of a green grey sky 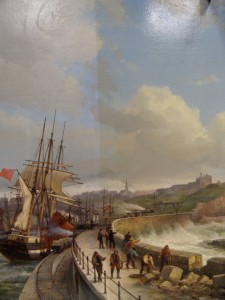 here is a picture of the painting during varnish removal. The clouds are now white and fluffy on the left where the yellow varnish has been removed. the figures also look sharper and the depth of field is improved 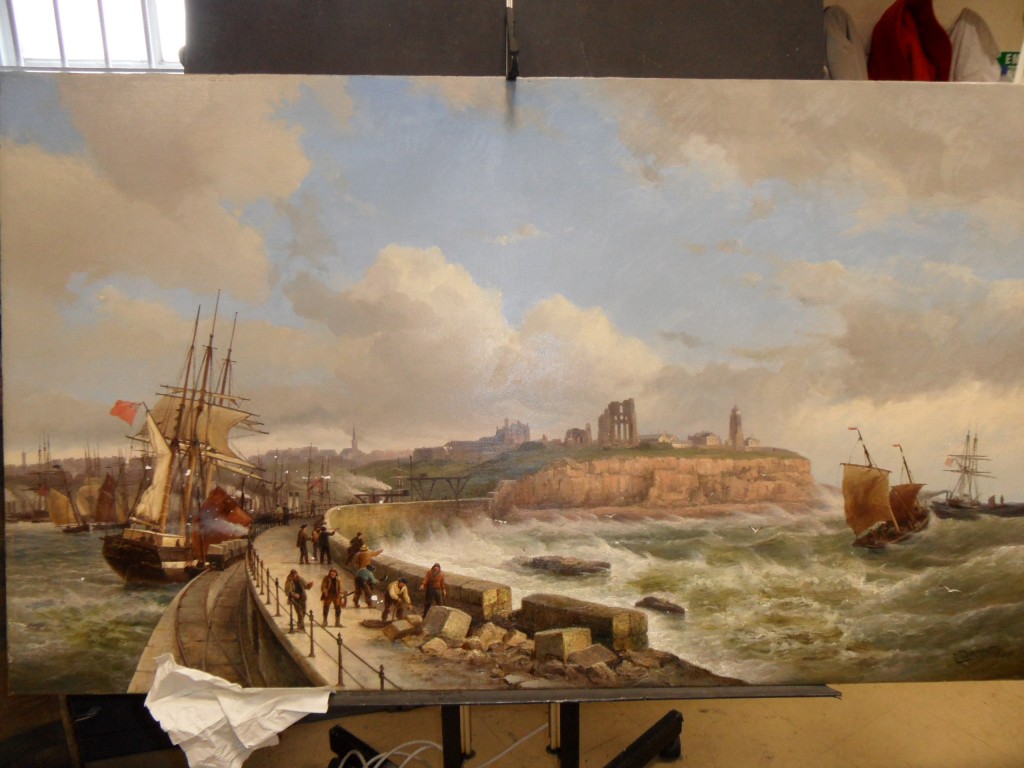 After cleaning off all the varnish and filling the paint losses the missing areas of paint were carefully touched in with powder pigments and varnish to finish the job. 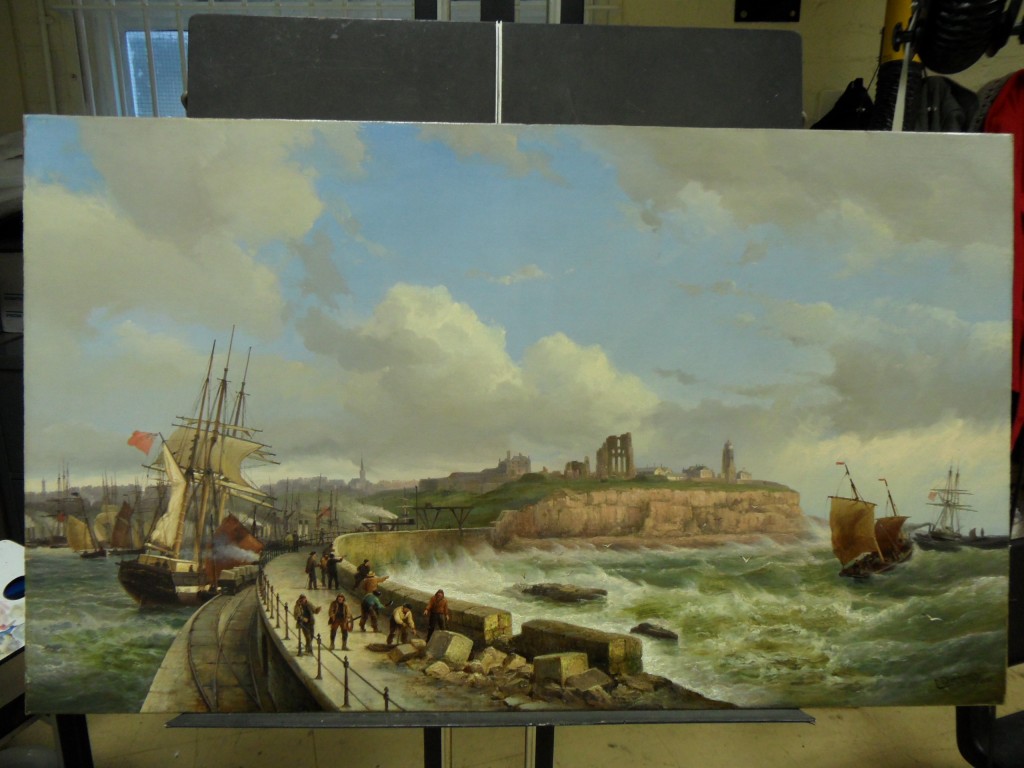 here is the Painting restored to its former glory and ready for redisplay. 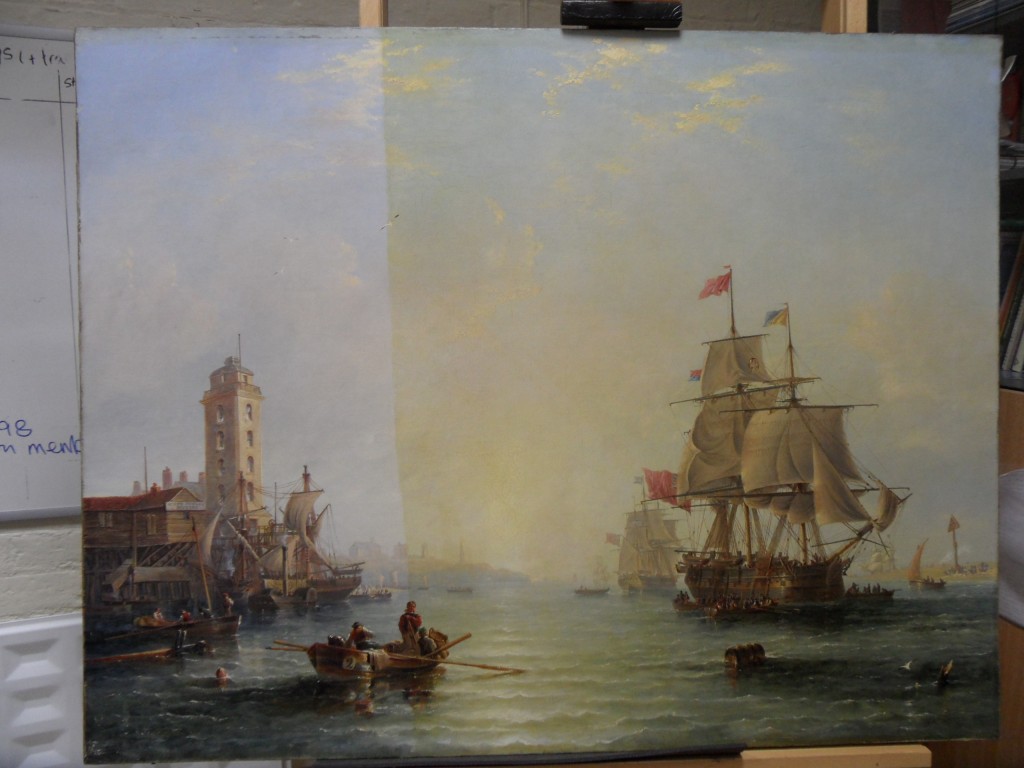 here is a carmichael painting during varnish removal 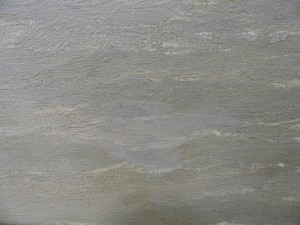 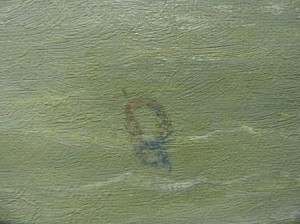 here is what I found underneath. unfortunately there wasn’t enough paint left to know what it was originally so it was painted back in after taking photos

here is what I found underneath. unfortunatly there wasn’t enough paint left to know what it was originally so it was painted back in after taking photos

The Port of Tyne paintings are now all finished and back in there cleaned frames and ready for display. Hopefully they will be enjoyed for many more years to come.