We recently found out what would be in a food parcel that would be given out to a family of three by the Newcastle West End Foodbank and bought the same items to go into our collection. 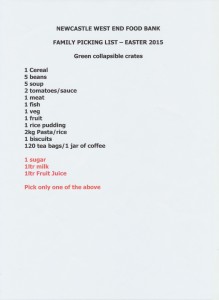 We were surprised to find out that the West End Food Bank is the busiest in the country. Matthew King, assistant manager at the Food Bank said:

“We are the busiest food bank in the country, mainly because of the large areas of poverty we have here in the parts of the West End of Newcastle.”

“We have a shortage of donations up here at the minute so we’ve been driving down South to stock up and bring the food back up.” 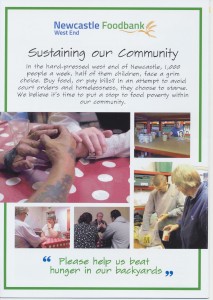 A photograph of a leaflet given out by the Foodbank

Collecting this got us to thinking about the food bank and what it says about life in Tyneside.

We found out that…

The North-East is the only region in Britain where households have become poorer. A study, carried out between 2010 and 2012, found that in every other region, households had an increase in wealth.

What do you think about it?

We recently asked about 30 of our visitors if they knew about the Foodbank and what they thought about it. Here is what they said;

A chance to have your say and find out more

We are working with local artists John and Karen Topping and the Newcastle West End Foodbank to create an installation which opens on 10th February and runs until 24th February at Discovery Museum. We’d like you to visit us and tell us what you think of food banks. What do you think they say about Newcastle today? How does it make you feel that Newcastle has the busiest food bank in the country?