I wonder how many of those who now live in the Garth Heads student accommodation know the history of this listed building. 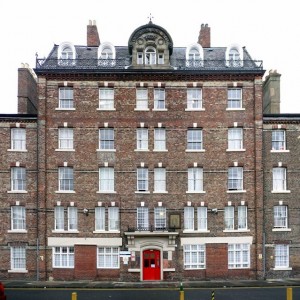 During the 19th century concern grew about the poor conditions that many working class families lived under in Britain’s large cities, whose population had expanded hugely during the industrial revolution. There was no social housing and poorer people rented whatever rooms were available, often lacking in basic amenities such as water and sanitation. In Newcastle in 1867, a report showed, 10,000 families were living in single rooms. In response to this situation, a number of Model Dwellings schemes were established, usually by philanthropists but still intended to earn a profit. Among the most famous are the Peabody Trust Estates in London, many of which still exist.

Newcastle Improved Industrial Dwellings Ltd was formed by James Hall, philanthropist and businessman, of Hall Bros Steamship Co. A prospectus was issued in 1869 for a block of 40 tenements in New Road opposite the Ragged Schools, and the buildings were opened in September 1870. They were extended in 1872 and 1878. The original building was four stories in height and the extensions six. Shops were included and eventually 108 separate flats, and there was also a social recreation room, including a library. 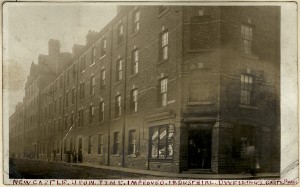 The architect of the buildings was John Johnstone, a Scot who had worked with Sir George Gilbert Scott, and who also designed Gateshead Town Hall and Leazes Park synagogue in Newcastle.

The flats didn’t have internal sanitation but there were two WCs on each landing and communal washhouses for laundry in the courtyards. Tenants of the Dwellings were offered electric light as early as 1904, but opted to stick with gas. Electricity was installed in 1930. The lack of luxury of the flats illustrates how poor conditions must have been elsewhere. 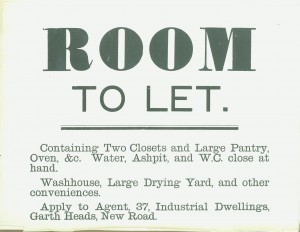 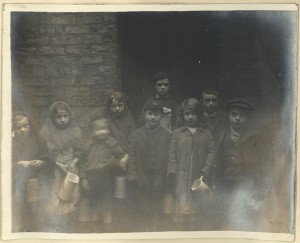 The buildings were sold to Newcastle Corporation in 1968 and the company wound up. They are now Grade II listed and in use as student accommodation. The company archives are available at Tyne & Wear Archives. You can find details at http://www.tyneandweararchives.org.uk/DServe2/dserve.exe?dsqIni=Dserve.ini&dsqApp=Archive&dsqCmd=Show.tcl&dsqDb=Catalog&dsqPos=0&dsqSearch=%28RefNo=%27dt.nid%27%29